"Reflecting on the book with a great view of the skyscrapers, trains, & bustle of NYC, the thought of The Big Bang being an urban noir struck me," said Anthony, creative lead for Genesis Noir.
Alissa McAloon
Editor-in-Chief
June 07, 2021

Independent Games Festival finalist Genesis Noir turns the Big Bang into a detective story that spans all of existence, aiming to save your love by destroying creation itself. It's part scientific theory, part noir crime story.

Gamasutra had a chat with Evan Anthony and Jeremy Abel of Feral Cat Den, developers of the multi-award nominated game, to talk about what got them interested in mingling the two topics, how they developed a visual style that was striking but played to the team's strengths and size, and the musical inspirations that helped them create the game's impressive soundtrack.

Who are you, and what was your role in developing Genesis Noir?

Evan Anthony, animator/designer in NYC and I’m the creative lead on Genesis Noir. Genesis Noir is our first long form game! Previously we made little games for friends or advertising. 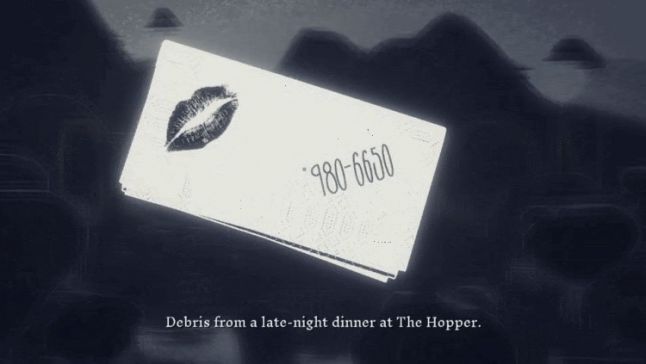 How did you come up with the concept for Genesis Noir?

Anthony: The idea came as I walked across the Williamsburg Bridge here in New York. I had just read Cosmicomics by Italo Calvino and was infatuated by it’s merger of scientific theory, abstraction, and heartfelt characters. Each short story in the collection begins with a brief scientific theory that frames the story that follows, and I loved the rhythm of fiction and nonfiction. My imagination was in overdrive.

Reflecting on the book with a great view of the skyscrapers and trains and bustle of NYC, the thought of The Big Bang being an urban noir struck me. It seemed a very natural concept that could be inspired by Cosmicomics, but with its own tone and inspirations.

Genesis Noir ties a detective story into the Big Bang. What ideas went into connecting these two concepts?

Anthony: It was important to balance the far-out abstraction of the Big Bang concept with classic film noir story tropes. By beginning the game with a familiar love triangle, we establish a foundation that lets us take the story to unexpected places. Creating this game was a real joy as we got to investigate the existential themes within the structure of film noir, different eras in history, and the nature of spacetime. 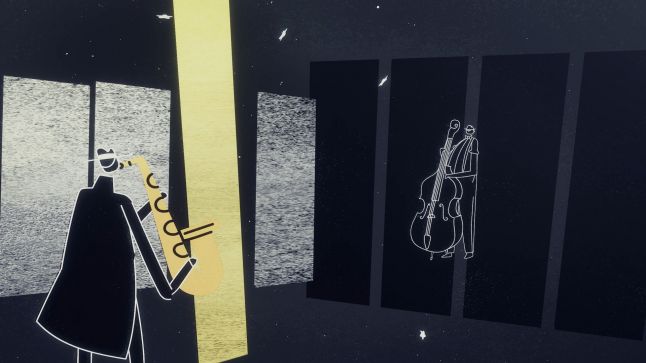 Genesis Noir features a striking visual style. Can you tell us about the process that lead you to it?

Anthony: Our background is in web/installation design and motion graphics animation. Projects like Umbro Blackout by Buck emphasize graphic design and creative transitions. We wanted to make a game that likewise changed perspectives and settings to create delightful surprises, especially since our story is set in space at scales from subatomic to interstellar.

The black and white mix of hand-drawn and 3D is also a very efficient visual language for a small team. Simple characters enable us to create limited yet expressive animation. Simple lighting and forms enables us to combine 2D and 3D props to create interesting environments. We’re able to economize at times but also to add flourishes at others.

Abel: Also, our friend Jeffrey Soldan built us a custom tool to import vector animations from Adobe Animate. It renders the animations as geometry, which lets us keep the file size small while still having resolution-independent full-screen cutscenes. This really enabled us to leverage our network of animator friends in NYC, since they were used to working in Animate already.

The game often seamlessly ties puzzles into the visual style. What thoughts went into creating these connections between play and visuals?

Anthony: We really enjoy playful transitions and wished to make the experience very seamless. The emphasis on transitions also helps convey that No Man is a transcendent being who is present at different scales and times in the universe.

What thoughts went into capturing the sheer cosmic size of an expanding universe, while also the tiniest of moments within it?

Anthony: Since Genesis Noir takes place across time and space during the whole lifespan of the universe, we could include anything! To create a story that didn’t completely fall apart into absolute indulgence, we attempted to connect interactions and moments throughout the game through comparison or contrast. For instance, one level features the juxtaposition of the death of a star with the decaying of a dead stag to unify the cosmic and the familiar. These loose associations allowed us to explore a wide range of settings and concepts while adding subtle structure to the game. 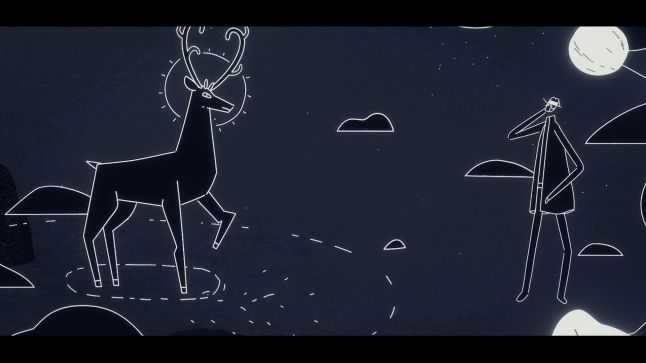 What thoughts went into finding a musical style that fit into the setting?

Anthony: Our goal with the music was to pay homage to classic film noir scores and jazz, but also utilize abstraction and synthesized audio for a contemporary tone.

We were drawn to the spiritual music of John Coletrane and Charles Mingus. “A Love Supreme” and “Goodbye Pork Pie Hat” strike a balance between joyfulness and melancholy that’s very fitting for a tale of creation.

We were also incredibly inspired by the far-out costuming, spacey themes, and experimentation of afro-futurist musician Sun Ra. Since our concept combined science fiction and existential concepts, his music was a perfect reference. Sun Ra’s album art and films were also big inspirations for the visual design of the game.

What did you want the player to feel through your work? What emotions did you hope to evoke with your story, visuals, and music?

Anthony: I’d like the player to enjoy or become curious about some of the history/physics topics the game explores. As a film noir story, I’d also like the players to feel the shades of gray in the characters actions and feel a bit uncertain about the ending.

Abel: I’d like the player to feel the same passion we have for the topics and themes encountered in the game. If they come out of the game with a new respect for jazz music or an interest in the cosmos, we’ll have done our job.