Tied Escape: Curse of Cortez ties two players to chairs, action movie style, then has them escape a devious trap by working together to hit buttons around a room.

Gamasutra spoke with the development team behind Tied Escape: Curse of Cortez to talk about the challenges that come from creating such a physically exhausting game, as well as the work that goes into making the controller durable enough to survive a daring escape.

Fabre: So my name's Joris Fabre and I'm in charge of the tech aspects of the game: wifi, buttons, and stuff. Funny stuff.

I was involved in many modding projects long before I started my studies! Always found the world of video games to be incredible. Still amazed today.

Pruvost: My name is Louis Pruvost, known as Lou. I was responsible for both the game design and the conception of the universe of Tied Escape. 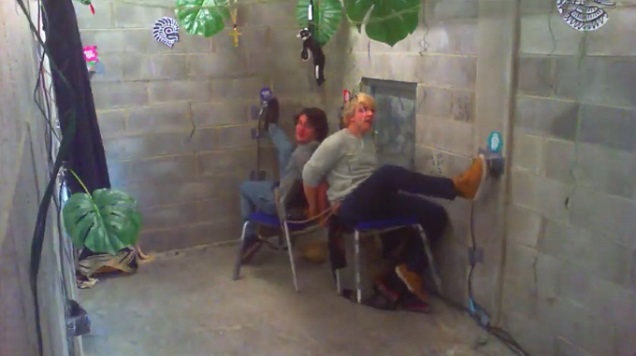 I've always been a huge fan of video games and board games. Mostly, exploring universes and lore is my jam.

As a game designer, I've worked on several projects developing game mechanics, stories, characters, and environments with game artists. I mainly take my inspirations from what forged me as a child, like science fiction and fantasy RPGs. I try to bring a feeling of epic adventure to each of my projects.

Gosset: Hello! My name is Yann Gosset, and I am one of the five game designers who worked on this project.

I always loved to create games and manipulate the rules and mechanisms of existing games, so I naturally chose the path of game design. On Tied Escape, my role was to make sure that the player had many different experiences playing our game, and making sure that they were fun. We had several good times working on this game, and it was a good experience in game design. In conclusion, I'm happy to work on this project!

Butor: My name’s Sebastien Butor (please just call me Seb), and I was responsible for the development of the software part of the game.

Exploring games in alternative ways is a soft spot in my heart. Recently, I had the occasion to do an internship in which I had to develop a game in order to gamify an enterprise. Games can be anywhere and anything, if you put enough imagination and effort into it!

Sion: Hello! My name is Pauline Sion (also known as Pou) and I am the artist and illustrator on the project.

As far as I can remember, I've always loved playing video games and drawing, so becoming a game artist was a predictable thing to happen [laughs]. My favorite thing is character design!

I have had some professional experiences. I did concept art for an indie game, and worked a bit for Ankama Games as a character designer. I was very happy to have the opportunity to join A.T.E team and to work with them!

Boutry: Hi! My name is Gary Boutry. I’m in charge of the team and the organization of the all of our travels, partnerships etc… I’m the one who oversees all the business, actually.

Basically, we’re all in the middle of our third year of Game Studies at Supinfogame Rubika in France. We’re all studying game design, except for Sion, who joined the game art school this very year. We all had to make a board game in first year, a Zelda-like game in second year, and are currently focused on making mobile games this year. 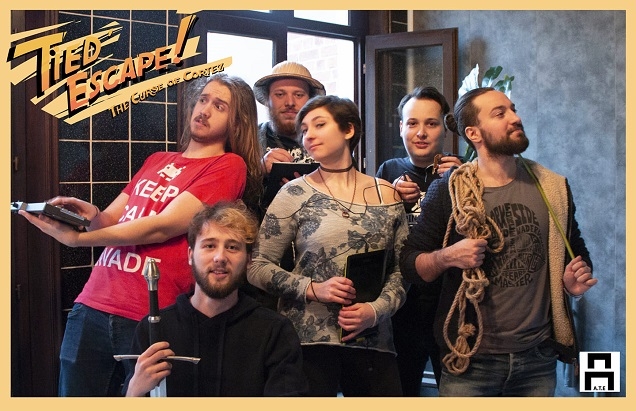 Creating a daring escape for two

Gosset: In this game, two players are acting as adventurers. They are locked up in a room, and tied up back to back on two chairs. A screen gives them instructions about pushing buttons...

Sion: … but those buttons are scattered around the room! They’ll have to work together to move in order to push them, generally with their feet, or even their head!

The tools to create a devious trap

Butor: We mainly used Unity to develop our game, since it’s what we mostly use in our studies. We developed it in C#, and used tools like Scriptable Object to create Events (the different tasks tied to pushing buttons). Recently, we developed a tool allowing us to create events even more quickly and directly in the game instead of through the editor. The goal was to be able to effectively create events adapted to different environments and button setups.

Boutry: You can simply see it as a level editor, allowing us to register multiple party setups! It is also a way to make it adaptable to commercialization for private people.

Gosset: We used pretty simple materials for our first physical prototype: buttons linked to a card with cables, translating electric signals into keyboard inputs that were interpreted by the game.

Sion: For the rest, we personalized chairs so that they were comfortable and secure, and finally added decorations to set up the mood.

Fabre: With GDC coming up, and also in the continuity of an imaginable commercialization, the goal is to replace cables with wireless devices in order to avoid all constraints from the cables. 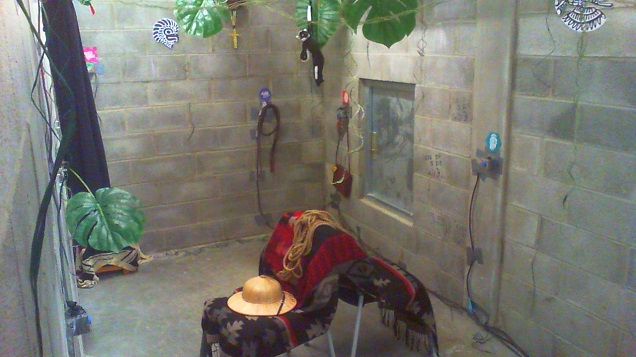 Fabre: As part of our video game studies, we had to create an alternative controller game. Throughout our reflections, we started to focus on displacement constraints.

Boutry: We wanted to encourage players to use parts of their bodies in order to achieve tasks that don’t usually use these limbs.

Pruvost: This is how we came up with the idea to tie up a person to a chair, and then to add another player in order to create situations such as the ones you can see in movies like Indiana Jones.

Butor: We immediately tried by simply holding hands while the other members of the team simulated the buttons by placing their hands around us! Very quickly, that concept appeared to be really promising! 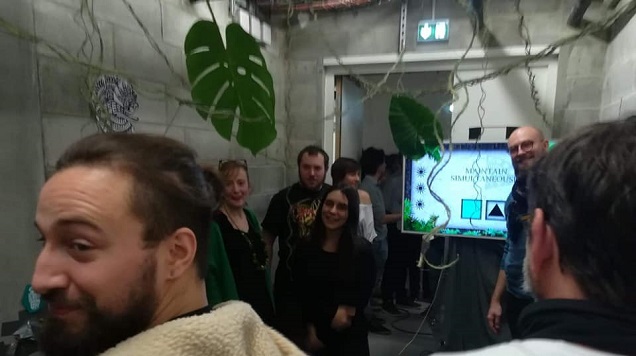 The challenges of creating such a taxing escape

Fabre: The main challenges were to find adequate equipment to play without breaking anything! In fact, the game can be really turbulent.

Gosset: We had to tinker to create comfortable, solid, and protected chairs (that really was the hard part!), but also solid and movable buttons, and finally, to find a place where we could install our prototype. 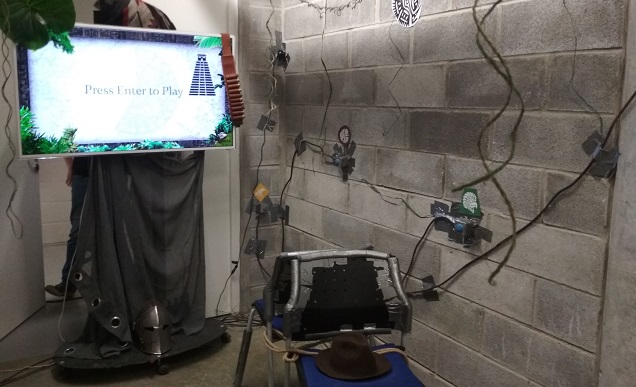 Creating comfort in a physically-demanding game

Sion: The hard part was creating an agreeable experience, making players want to reach the end of the game, and in the best case scenario, to play another one!

Pruvost: That worked mainly by setting a short time limit for a party to make the experience as comfortable and secure as possible. Creating tasks that were quickly and easily understandable was also important so the players won’t waste too much time trying to understand what to do.

On adding a time limit as the fail condition

Butor: Quite simply, it was an easy and efficient way to add a single defeat condition that was understandable in a second! Again, the game being quite physical, it was also important to set an average duration for the game.

Boutry: Even further than that, it was a good way to immerse the players in a critical situation, like if their lives were in danger and depended on their cooperation! 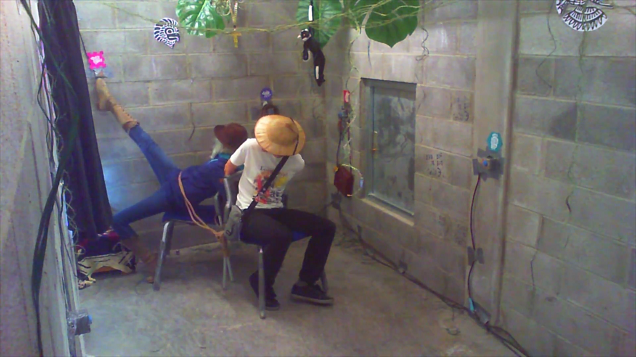 Sion: The cooperation is encouraged by the fact that the players are LITERALLY tied up to each other, implying that working together is needed to complete any action. It’s barely possible for a player to move if the other one doesn’t move an inch!

Gosset: That barrier about playing with a stranger is shattered by a simple basic instinct - survival - that pushes the two players to immediate action.

Boutry: We decided to focus on that theme because we wanted to create a strong social experience between two people whether they already knew each other or not.

Fabre: The physical impact of the game makes it so that players will rarely play many rounds in a row. The good part about that is that the experiences they would have lived will only be stronger, as they are felt by the player through actual exhaustion.

Pruvost: In our opinion, that exhaustion makes for an even more complete and immersive experience. It gives the feeling that you're truly an adventurer that's struggling hard to escape, and not just a player who spammed a button while sitting on their couch.

Making the player into a controller

Pruvost: What makes alternative controller games so unique is the path of reflection that leads to their outcome. In classic video games production, you first think about things like gameplay, narration, or overall ambiance, and then you map your controls. Here, the path is inverted.

Boutry: Our game follows this path thanks to the immersion that our controller offers. In this game, we can literally consider the players as a part of the controller. The tense situation creates an even more complete experience, soliciting primary reflexes, up to the feeling of exhaustion taking a part in the experience.