ReLeap will have players leaping and sliding through challenging environments by moving a foot pad and pulling/pushing a steel bar.
Alissa McAloon
Editor-in-Chief
March 12, 2019

ReLeap will have players leaping and sliding through challenging environments by moving a foot pad and pulling/pushing a steel bar. Through these physical actions, the game looks to connect the player with the action on-screen.

Gamasutra spoke with Léo Smith and Linda S. Khamphoukeo, members of the team that created ReLeap, to talk about the challenges of making that physical connection with the game, what this connection adds to the game, and the thoughts that went into turning the body into a kind of input.

Smith: Hi! I’m Léo Smith, and I'm the project manager of ReLeap. I also worked on the sound, music, and level design.

Currently, I am studying game design and project management at Uppsala University. Our courses are very hands-on and project-based, meaning we work a lot in teams. We are encouraged to learn by failing fast and often, so I feel like I’ve learned a lot. Prior to my studies I had zero experience in game-making.

Khamphoukeo: Hey, my name is Linda S. Khamphoukeo, and I am the environment and cutscene artist, as well as the social media manager.

I am studying game design and graphics at Uppsala University. Here, we are learning through group projects by giving feedback to each other and making big game projects together like ReLeap. Before studying at Uppsala, I had been going to game jams in Denmark since 2015. 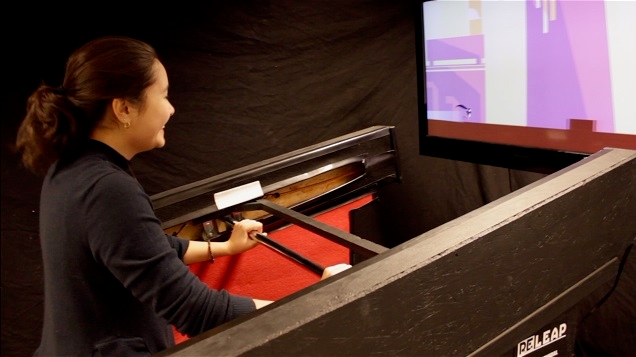 Harnessing the physical acts of leaping and sliding

Smith: We call our controller an arcade booth because it resembles the size and form of the classic arcade machines, and because you can step into it like a booth. The arcade has a metal bar at approximately elbow height which can be pushed and pulled with both hands to trigger the in-game jump and charge jump. At your feet there’s a “slider" which can also be pushed forwards and backwards with your foot to slide in-game and to modify your jump.

Smith: In the ideation phase, we had each group member come up with at least one game idea that had an aesthetic (the intended emotional experience for the player) and its corresponding mechanics. It was important to us that the mechanics and aesthetic worked together to create a cohesive experience. After prototyping our ideas, we felt that the mechanics of avoiding obstacles and charging a jump and then being flung through the air really complements the aesthetic of anticipation and release. 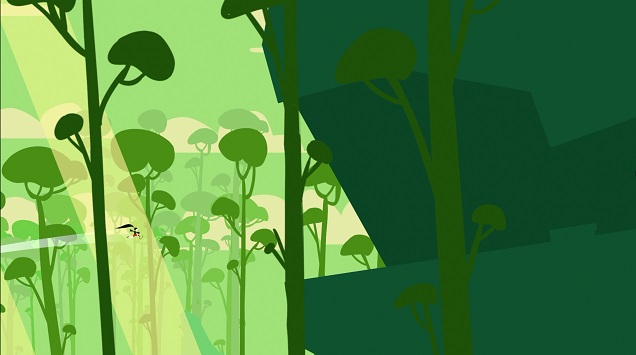 The appeal of using the body as a controller

Smith: ReLeap was a project for a university course which required us to develop alternative controls. We really liked the idea of the player using their whole body as a control.

Khamphoukeo: We wanted the player to feel like they are actually doing the action that is happening on the screen. That way, they are more immersed in the game.

An extension of your own body

Smith: I think this real motion definitely enhances the experience and makes it unique. It’s pretty cool that you’re moving your whole body to control the in-game character as opposed to tapping buttons. Once you get the hang of it, it’s like the arcade becomes an extension of your body and you flow through the level —it’s immersive! Personally, I find the game fun even without the arcade cabinet, but when we have it set up, I’m usually the first to jump onto it and play.

Smith: Since the very beginning, we decided it was important to continuously test our control scheme with the game. This meant that we built multiple prototypes that imitated the controls and helped us recognize which gameplay elements were engaging and which weren’t viable. It also helped our engineer find a clever way to build the final version. It was pretty late into production when we actually had the full arcade be functional and were able to gather feedback to make more improvements.

The controls are not intuitive for all players, therefore we designed the level so that at the lower platforms the gameplay is relatively easy, while at the top platforms the game is significantly more difficult. 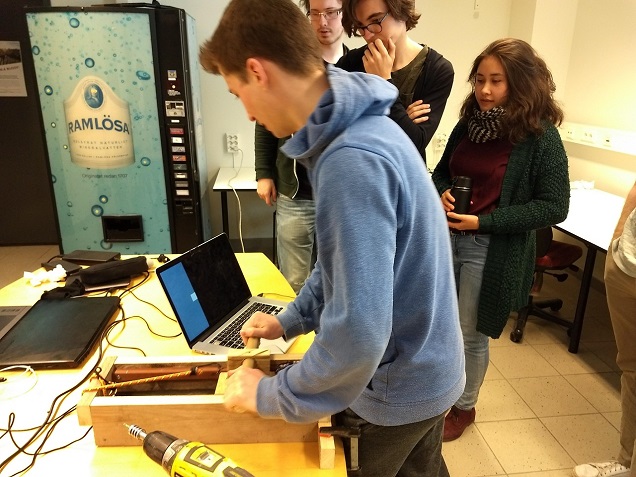 Smith: When it comes to the foot slider, it’s pretty clear that you are doing the same movement as in-game. The jump, however, is different. Pushing the bar to perform a simple jump works because you are pushing your body forward as you would with a jump in real life.

What I really love is the charge jump, though. When you pull the bar back, the game goes in slow motion and Feng (the avatar) readies herself up for an epic leap (anticipation). Then, when you thrust the bar forward, Feng bursts into the air and there is a moment of airborne ecstasy (release). I think it's about how you are shifting your body’s energy, and how that is emulated through gameplay, that makes it click.

Smith: We used Unity as our game engine and GitKraken for source control. For sound design and music, I used Ableton Live and FMOD Studio for implementation.

Khamphoukeo: All the artists used Photoshop for concepts and in-game art. For animation, our animator used Spriter.

Smith: The arcade is built mostly out of plywood and a palette as the base. We found some wheels and a metal bar in a warehouse which are used for the pushing and pulling of the bar as well as for the foot slider. To add some resistance to the pushing and pulling, we used bungee cords that bring the bar back to the dead zone (the area where no input is detected). We used copper tape and an IPAC to register and send input to the computer.

Creating a connection to the game through unique controls

Khamphoukeo: ReLeap becomes more immersive through the way your body works with the unique controller. The controller accentuates the feelings of charging up and releasing for that epic jump. It challenges you to focus on your movement, but when you get into a state of flow, it feels like freedom. By emulating Feng’s movements, it strengthens the relationship between the player and her so that it actually feels like it is you in the game.