Neon Nemesis appears to be a four-player arcade game, but a hidden fifth player will make mayhem for the others using a lair filled with traps and deadly mechanisms.
Alissa McAloon
Editor-in-Chief
January 23, 2019

Neon Nemesis appears to be a four-player arcade game, but a hidden fifth player will make mayhem for the others using a lair filled with traps and deadly mechanisms.

Gamasutra spoke with Marcus Ford of Toasty Titan, developer of Neon Nemesis, to learn about the evil genius inspirations that went into the game, how drawing from cartoonish supervillains helped them make a compelling experience for the evil player, and how a song inspired the idea for their sinister arcade cabinet.

I'm Marcus Ford. My main role was that of a programmer. I worked chiefly on the Racer controller, particle effects, and power-ups. Furthermore, I, along with my team, all partook in the role of designing our game.

At the time of creating Neon Nemesis, I was 1 year through my Bachelor degree of Game Design and Programming at Uppsala University. However, before that, I would spend a lot of time world-building, creating powerpoint games, and building homebrew materials for Dungeons & Dragons. 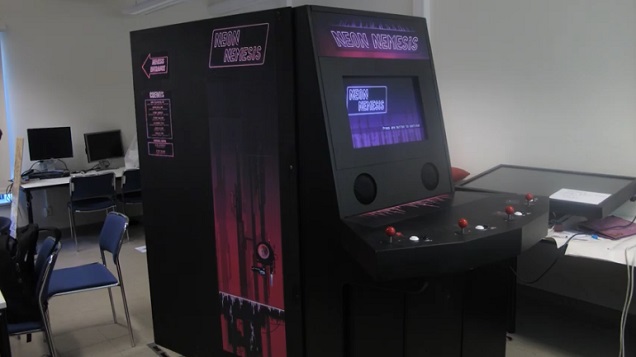 Neon Nemesis is a seemingly-normal game one might find in an 80’s arcade. On the outside of our arcade booth, you’d see a colorful screen accompanied by 4 sets of joysticks and buttons. At first glance, a majority of onlookers would assume this game only housed up to 4 players. But, behind the booth, a curtain conceals the entrance of the 5th player, The Nemesis. They reside within the very booth itself, in a lair populated by their own screen, a chair, and a plethora of controls including a rope, crank, lever, pedals, and various buttons of diverse shapes and sizes.

Each of the controls activates a specific type of trap or weapon found within the level.

We built our game within the Unity engine. Additional tools used during the development process were: Hack n Plan, GitKraken, and Photoshop.

The body of the cabinet is constructed using plywood, MDF, and some 2x2s. We worked thoroughly to keep it as modular as possible. All the buttons and joysticks are standard-issue arcade machine buttons. The “rope” hanging from the ceiling is a three-phase power cable attached to a pulley system, a spring, and a weight. For the lever, we went scavenger hunting at local second-hand stores. We looked at everything from a hole punch to a waffle iron before finally settling on repurposing an old door handle.

Most of the inputs use switches that are routed through either one of two I-PAC4 cards, which in turn are hooked up to the PC running everything. The only exception of this case is the crank. Since we wanted this to have analog movement, we strapped a mouse to the side of its axle to track the rotation. By using these materials and more, we managed to slap our arcade booth together in a garage and get it ready for GDC. 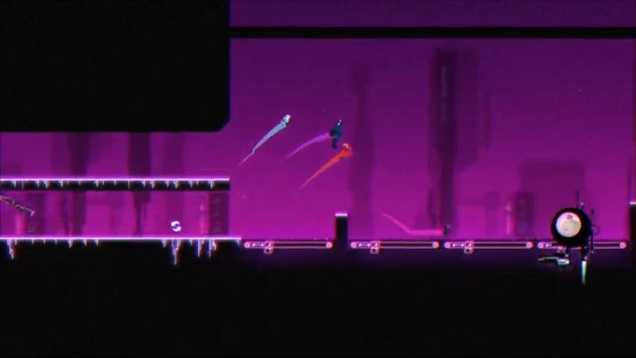 Born of a song

We took inspiration from a song called “Cabinet Man” by Lemon Demon. It sings the tale of a man who assimilated himself into an arcade machine, and whose sole purpose became to challenge anyone who dared put a quarter in him. Once the initial concept of Neon Nemesis was pitched, our entire team fell in love with the image of constructing a booth capable of housing a person inside of it. We still joke about how a simple song became the spark that led us to creating Neon Nemesis.

Creating a game within a game

During the early conceptualizing phase, we titled it Mastermind. We wanted the person inside of our booth to feel like a classic evil genius - the sort of villain who demonstrates an enormous amount of power by utilizing a great deal of convoluted tools.

The result of following this idea left our end product with two vastly contrasting experiences. As a Racer, you must fight against those next to you while struggling to survive the level itself, in a high-speed platforming challenge. On the inside, the Nemesis controls the very world around the Racers, and must use their tactical skills to employ the tools at their disposal to eliminate all who dare challenge the arcade booth.

Before we began imagining the various tools we wanted to create for the Nemesis, we started by making a list of mechanisms we thought would populate the lair of an evil genius. Once we had decided on our list of mechanisms, we began pitching traps and weapons that would synergize with each specific mechanism. Our goal was to draw a connection between the input required to activate each trap/weapon to make it clearer for the Nemesis. 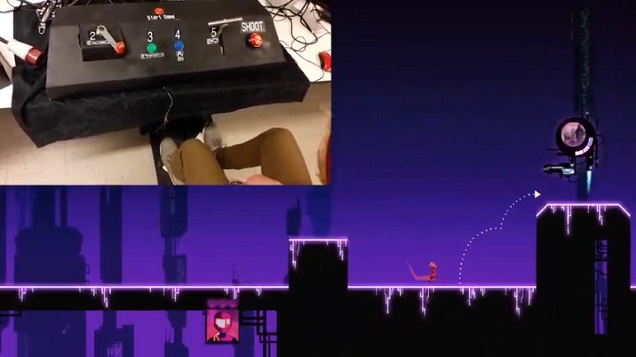 Our desire was to create a high-speed competitive platforming experience for the Racers, one that could easily be disrupted by the power of the Nemesis. While the Nemesis has deadly traps, weapons, and environmental hazards on their side, the Racers are only equipped with their own skill, mobility options, and the ability to collect and utilize power-ups.

On deciding to have players battle each other, rather than the game

This was a tricky decision for us. It was the most commonly-debated subject within our meeting. We came to the conclusion that making it entirely competitive would be harder to balance, but we welcomed the challenge. When we playtested the alternative, we would often see the Racers ahead of the pack required to stop or slow down to allow those behind to catch up. This caused a lull in the game, making it a bit duller for those ahead and would occasionally leave the Nemesis with little to do.

When it becomes every player for themselves, it raises the tension exponentially as time goes on. As the Racers progress through the level, we see players pulling every trick out of the book to deal with their opponents. It all boils down to the final confrontation, as towards the end of every match, it comes to that pivotal moment where one or two Racers remain close to the finish line. You can tell that the Racers, Nemesis, and even the onlookers are on the edge of their seats. This is what makes Neon Nemesis lively and entertaining.

The unique controllers of Neon Nemesis set the mood of the game. From the second you sit down inside the lair of the Nemesis and surround yourself with the control scheme, you truly feel like an evil mastermind. Having a unique input per trap completely separates each tool you have from each other - instead of thinking about it as one controller, you see them all as individual components that come together to create something extraordinary.

Kind of like a cake, and the arcade booth is our oven. It brings every piece of our game together, combining them in the best way possible to create Neon Nemesis.