Cursed! is a game of competitive magic potion making, with players battling for the spellbook and cauldron in order to cure themselves of some nasty afflictions.
Alissa McAloon
Editor-in-Chief
February 20, 2020

Cursed! is a game of competitive magic potion making, with players battling for the spellbook and cauldron in order to cure themselves of some nasty afflictions.

Gamasutra sat down with the developers of Cursed!, Yufei Zhang and Yating Wu, to learn about the thoughts that went into making potion brewing into a competitive affair, how they worked to make potion-making as straightforward as possible, and in communicating gameplay through the look of the controller alone.

The name of the group is WeHaveNoCat. Yufei is the illustrator, visual designer, and programmer of this game. Yating is the engineer and the fabricator of the game. The concept of the game was teamwork. And to be honest, this is a two-member group so most things are the result of close teamwork.

Neither of us has had much experience in making games before grad school, but we like playing them. Yufei comes from an engineering and illustration background, and Yating comes from an advertising and interaction design background. In our program, Design and Technology, we both made several board games and alt-control games for classes and fun. The spark of this game came from one of those classes. 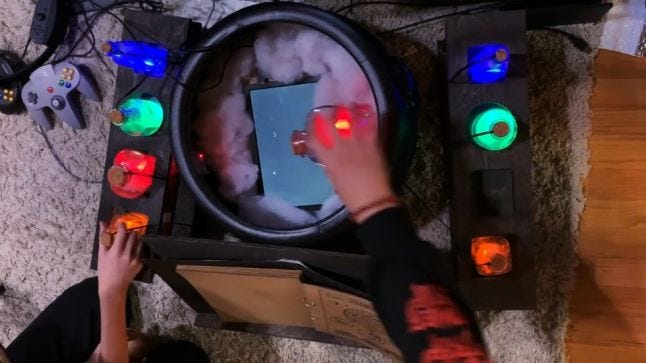 It’s a pot with some potions and a magical book. You just do witchy things you see in the movies; it’s as simple as that.

When we were brainstorming a concept for a game, alchemy and magic was just a domain we both think has huge creative space to make something quirky and intriguing. However, we didn’t want to just make a magic adventure game. So, we drew some concepts and then came to this image of two players fighting over a pot trying to put curses on each other. It was really fun to just come up with random curses and imagine how those curses would look like on the players. So, we decided this was the way we wanted to go, and after more game concept development, this competitive alchemy game is the one we landed on.

When we designed the mechanism of brewing potions, we wanted the process to be simple and direct. We decided to use combinations of several basic potions as the recipe to make different curses. First, it had to be determined what element each basic potion represented, and then, based on the combinations of those  elements, what each curse should be.

The second problem would be the game mechanism of adding and removing curses. At first, we thought to remove curses with spell chanting or ritual, but it just became so much of a parallel system that it shifted the core of this game. So, we designed it in a way that you simply add curses by drinking corresponding potions, and remove this curse by drinking the same potion again. 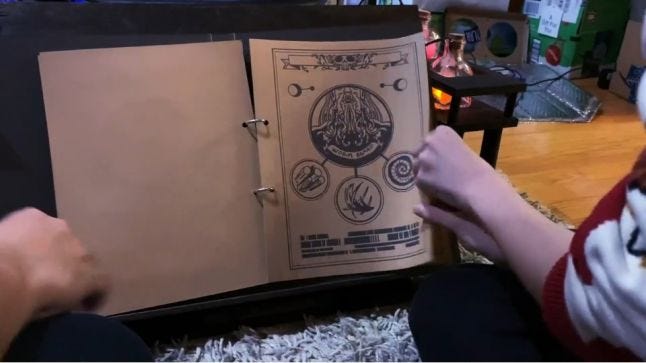 Learning how to play through seeing the controller

It's our philosophy that the controller should make the action as realistic as possible, so when the player sees the controller for the first time, they can just interact with the controller with a very short learning period.
However, that does not mean the game itself is simple. The difficulty of this game comes into play when the player has to find the corresponding recipe and grasp the timing of adding potions. The action of adding a potion itself is not a part that requires players to continuously practice to become proficient.

When we designed the first version of the game, the recipe book was not part of the game controller and the players had to figure out what each combination of potions resulted in. Then, they had to memorize each recipe. The problem with that was there was so much information that the players needed to handle so they just ended up randomly mixing. So, this time we made a book with all the recipes on it for players to check.

The game is programed in Unity and the illustrations/animations are made in Photoshop. We use Arduino as the processor of the controller.

The shelves are all made of wood; we made them from scratch. The rest of the parts like the pot, the book and bottles are all items we bought from shops and then altered using laser cut and paintings. And then, of course, there are all the electronics. 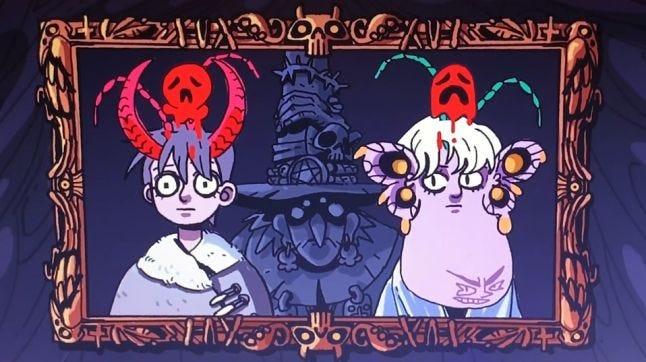 On why they made it competitive

The action of adding potions into the pot is the core gameplay, but that doesn’t have much variety, and after a couple of interactions players would lose interest. However, we liked how simple this action was, and we didn’t want to just make a game about potion making. By having the two players sharing and fighting for parts of game items, multiple layers are added to the action of adding potions. Not only did players need to pay attention to what potions should be added to the pot, the timing and the order of adding action also become something players need to take into consideration. So, it makes the game more interesting even after multiple times playing it. And the interaction with another player itself also adds to the fun of playing this game.

The colorful look of the curse and potion elements are mostly for communicating the game information. It’s so the players can quickly figure out what potions are in the pot and what kind of curse they have on them immediately.

We also wanted to make the looks of curses on players more exaggerated so that when a curse is added to a player, it is fun to see it instead of just being frustrating. Also, we know the topic and the narrative of this game is a bit heavy, so we didn’t want to make the vibe of the game to be all depressing and heavy by making all of the assets super-realistic. We add some cartoonish style into the art to lighten the game atmosphere.