What game developers are saying about No Man's Sky

"The design is: ‘here’s an infinite procedural world. I hid a game in here, see if you can find it.’ I think that’s kind of cool! Treasure hunts are under-represented as a basic model of game design"
Simon Carless
Blogger
August 16, 2016

It seems like all of gamedom is buzzing about No Man's Sky. It's had the most successful Steam launch of the year, and it's inspired almost as many think pieces as there are planets in its vast procedurally generated galaxy.

Reviews have been mixed, ranging from rapturous awe to bored frustration. But we wanted to get a read on what people in the industry are saying about the game. So we emailed some developers, and scanned Twitter for reactions from design luminaries.

Samantha Kalman, director of Timbre Interactive (Sentris), had a succinct response. "I think it's a profound achievement in scope and scale," she told us. What do other devs think about No Man's Sky? What are the doing in the game? How would they categorize it? What do they think about its mechanics?

Alexis Kennedy, a founder of Failbetter who was creative director on Sunless Sea and Dragon Age: The Last Court, let's us know that he's enjoying No Man's Sky, and attempted to describe its unique environments: "Imagine an alternate universe where Star Trek had had no plot or characters, just a different colored planet with different shaped rocks and new animatronic puppets each week; but Nicolas Roeg directed, and Jim Henson had done the puppets. I'd watch at least a few episodes of that." 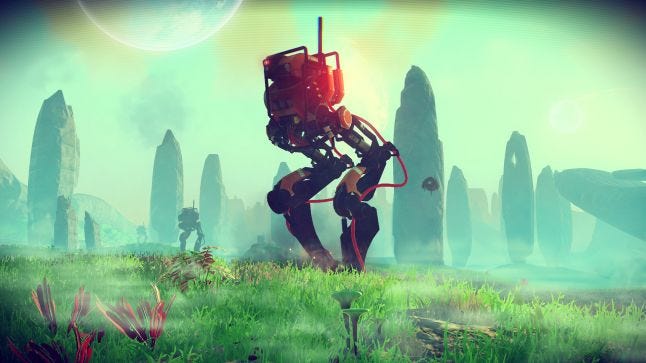 The game has many developers thinking about the possibilities and the challenges of such an ambitious use of procedural generation. "My initial experience is that I spent my first 2-3 hours of the game wandering around the starting planet searching for zinc, and it turned out to be pretty elusive," says Joseph Humfrey, co-founder of Inkle Studios. "The hostile and rather barren planet I started on definitely felt more like a No Man’s Land."

"It made me wonder how difficult it must’ve been to balance the gameplay when every player’s experience can be radically different," Humfrey adds. "How do they ensure that every player’s initial tutorial ramp is gentle yet distinct? On 80 Days we had a comparatively trivial layer of procedural generation in the distribution of the markets and the pricing of the journeys, and even for us, it was extraordinarily difficult to balance without overriding elements by hand. My takeaway is that procedural generation may be powerful for world building, but you should be incredibly careful when it impacts gameplay." 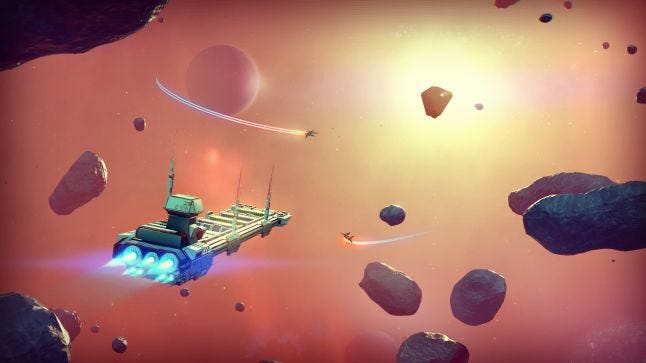 Bennett Foddy, designer of QWOP, Sportsfriends, and GIRP, took to Twitter to comment on the national characteristics he perceived in the design of the game. "No Man’s Sky is essentially European, echoing Elite, Mercenary, and Captain Blood," he writes. "If you’re expecting Wing Commander you’ll be disappointed. In the context of the prior games in the genre, it’s nice! But the style of the genre is ‘empty space,' letting your brain fill in a lot."

"English devs in particular have a long history of making expansive space exploration games," notes Foddy. "Not just Elite but Damocles, Starglider, etc. (It’s surely no coincidence that the pre-eminent American designer of these games, Chris Roberts, grew up in England.) The design is: ‘here’s an infinite procedural world. I hid a game in here, see if you can find it’—Daggerfall, Mercenary, Elite and No Man's Sky.

Foddy stresses that this critique is not meant to be dismissive. "I think that’s kind of cool," he says. "Treasure hunts are under-represented as a basic model of game design." 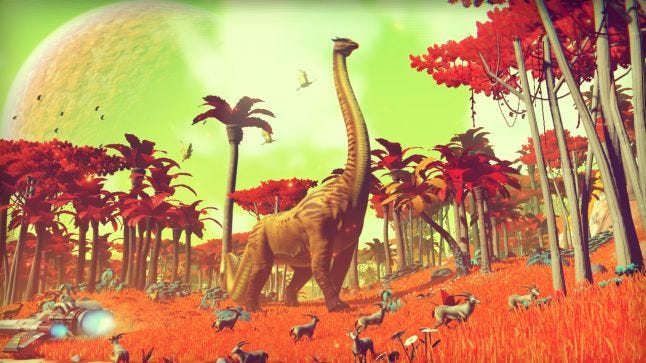 We heard conflicting reactions from devs on the morality and ideology embedded in the game's mechanics.

"I felt surprisingly guilty harvesting resources from a pristine landscape, especially since it involved shooting them," Robin Hunicke, co-founder of Funomena and producer of Journey, tells us. "When I realized the Sentinels were drawn to me based on the rate of my pillaging -- I felt like the designers had done something good. I like the idea of games moving away from the idea that you can take anything you want from a place (or its people) to survive." 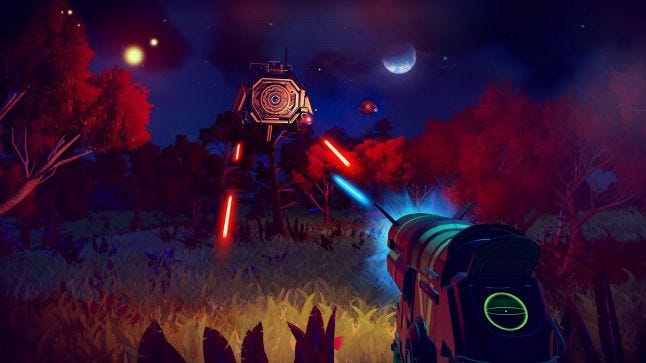 But Walt Williams, a writer and narrative designer on games like Spec Ops: The Line and Borderlands: The Pre-Sequel!, had a decidedly different take. "No Man's Sky is a beautiful game undercut by bleak, expansionist mechanics," he wrote in a recent tweetstorm. "A whole universe of 'what can I discover and how much $$$ will it earn me?' It's Independence Day from the aliens' POV. Like locusts, moving from planet to planet, you consume every resource and then move on."

"What's sad is despite all our ingenuity, so many of our mechanics reinforce ideas and behaviors we know to be harmful," Williams adds. "We're capable of creating endless numbers of worlds and species, but we can't think of new things to do with them."

"Humanity has reached its peak," he concludes. "There are no new ideas; only technological upgrades. In summary: beautiful graphics, seamless travel from ground to space, easily 50+ hours of gameplay. 10 out of 10."