What are we talking about when we talk about systemic narrative?

What is Systemic Narrative and how it can improve current narrative approaches?
Victor Sanchez
Blogger
August 16, 2018

There are a lot of approaches to narrative on games. The most usual one is linear narrative where the storyline always follow the same path and reach the same conclusion, but we can find games with branching narratives, where the storyline “splits” on certain points providing different conclusions; parallel narratives, same that previous one, but branches merge again to reach an unique conclusion; non-linear narrative, where the storyline is divided on small chunks that the player must see, but they have certain freedom to choose the order and finally dynamic narrative where no specific ending is defined and the chunks of story can be played and replayed on almost any order. 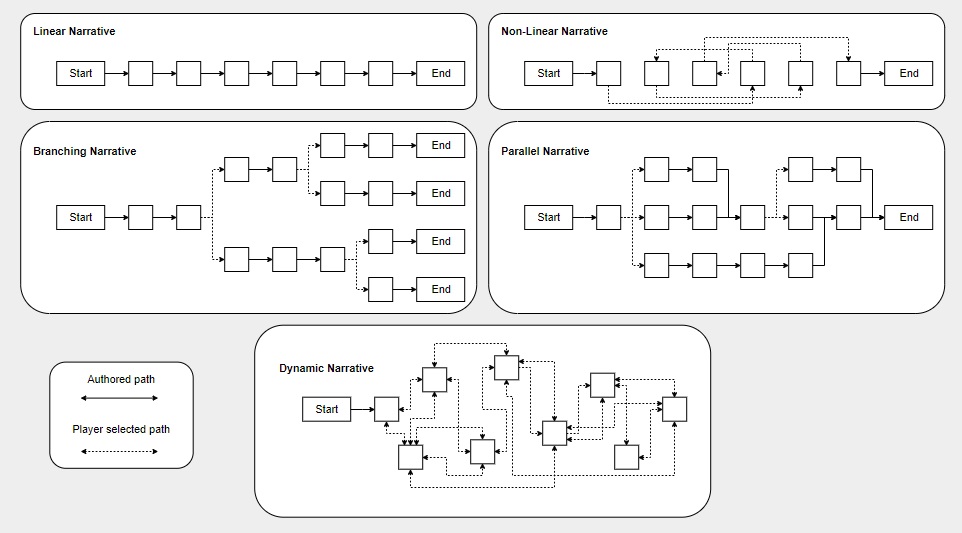 Systemic narrative is not a new approach to narrative but a new way to realize any of the previous approaches.

When we talk about systems on games we refer to elements that work following rules. These rules are met by the internal state of the element, and this state can be modified by inputs and can provide outputs. These inputs and outputs may be provided or consumed by other elements of the system, other systems or players/NPC actions.

Systems do not provide responses that we cannot script (given enough time) but a different way on how those responses may happen.

Obviously this only makes sense when our scale starts growing. If there is just one element on the game to be lit with the torch, the scripted interaction is more than enough but if we are going to provide the players with a variety of elements that can be burned and we want to be able to propagate the fire with any element already on fire instead of just using the torch all the times, a system can prove useful. Even more… because the rules are usually based on real world behavior, it will provide more believable results and as the outputs will continue interacting with other elements, players will face situations that are acting on their own, not just reacting to their actions.

So, when we talk about Systemic Narrative, we talk about creating a system that provide the rules on how the narrative unfolds. We are talking about having narrative elements that may have some inputs, that modify an internal state, that is used to apply a serie of rules, and may provide some outputs, and as a good system, these inputs and outputs can have its source on or be consumed by other elements of the system, other systems or players/NPCs

I find important to notice that this is not a black or white situation. It is not fully systemic versus non systemic at all. We can mix and match. Currently we can see examples of games, usually open world games, that use a systemic approach on how the side missions are given to the players while the main storyline is presented on a more traditional “press button to start mission” way. Sadly, on these cases, the rules seem to not go too far beyond of a generic interpretation of its scripted counterpart, being limited to player centric checks (Has the player reached this level? Do the player’s inventory contains this object? Has it been X seconds since last time player tried to do this?)

As in the fire system example, there are little advantages on create a system that control the narrative when the final result is so constrained that a simple script could provide easily the same experience, but if we are aiming to have a narrative that seems to happen not just because the player pressed the interact button but because everything that has been happening provide the appropriate conditions that make it happens, then we should consider creating some form of systemic narrative.