Inkle cofounders Jon Ingold and Joe Humfrey share their ideas for making unique game settings that will draw your players in.
Bryant Francis
Senior Editor
May 01, 2019

In Heaven's Vault, the latest narrative adventure from the developers at Inkle, players are tasked with exploring a series of far-flung moons inside a nebula navigated by sailing a spacecraft down fast-moving rivers of space-stuff.

Between that heady, dreamy description, and an aesthetic that draws on Middle Eastern and South Asian visual references, Inkle deserves credit for building a unique setting that sets the game apart in a crowded market.

In a recent chat over on the GDC Twitch channel, Inkle cofounders Jon Ingold and Joe Humfrey described the development process of Heaven's Vault in an effort to help other developers create unique settings that suit their game, no matter the genre.

This discussion about the world of Heaven's Vault emerged from a comment that the game's look and feel are sort of similar to Jordan Mechner's rotoscoped classic The Last Express. While Ingold and Humfrey admitted to being fans of the game, they explained they arrived at a similar aesthetic by a very different path.

Ingold said that the process began after Humfrey took a trip to Italy and saw landscapes filled with flowing rivers, which set the pair thinking about how space is often represented in games.

Per Humfrey, "when space is represented in games, it's kind of like this black void of emptiness and hard steel...we love the idea that you can create a version of space inspired by these nebulas seen by the Hubble telescope; these beautiful, colorful, and dense nebulas more like landscapes or rivers and mountains and cloudbanks."

Of course, trying to explain why there are rivers in space proved to be a complex discussion even for the game's creators. Ingold recalled that "there was maybe even a year where I would wake up in the morning, try to do some writing, and think 'why are there rivers in space?'"

"I would ask the office 'why are there rivers in space?' and they'd go 'oh it doesn't matter,' but I think we need to know this!" 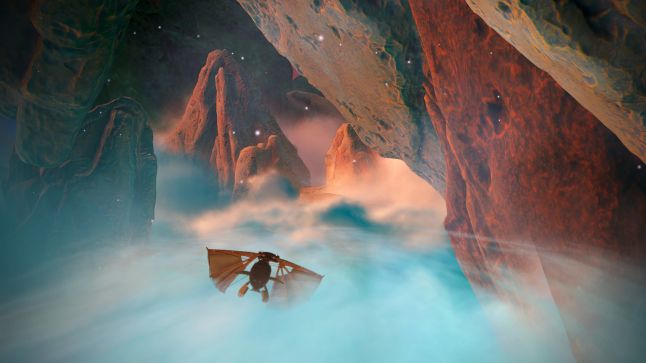 The reason would eventually become a core part of the game's plot (so no spoilers here), but it did lead to a conversation about the game's backstory, and how far game developers need to think it out before it becomes irrelevant to the player.

Ingold compared the process for making worlds based on magic and worlds based on science, in terms of building connections with players. "The problem with magic is that it's arbitrary," said Ingold. "That's a problem if you want to make your world compelling, especially if the player doesn't understand it and wants to explore it."

"But if you lay out a lot of technological worlds in the way that Star Trek does, you end up with this incredibly complicated world that's very accessible for people coming it to new."

So for Heaven's Vault, Ingold said Inkle's goal was to build a setting based on two rules, with interesting consequences. But Humfrey pointed out that, for a game set around archeology, this led to the team needing to make 5,000 years of history.

Ingold tried to resist that, apparently. "I was like 'we'll be fine, we'll just make stuff up,' and then I realized I couldn't do it. I genuinely needed to know what happened half a thousand years ago in order to write [a specific] location.

"It was really hard work. But I think the thing that makes it hang together is just--we have tried to shave it back at all times and make sure it really genuinely makes sense for itself."

If you're looking for some authors whose settings inspired the Inkle crew, Ingold took the time to recommend Ursula K. Le Guin and Gene Wolfe. To learn more about what makes Heaven's Vault tick, check out our wide-ranging interview with Ingold and Humfrey about its development, or this focused dive into how Inkle developed a whole ancient language for the game.