In this post, I'm writing on the way I see the status quo of RPGs nowadays, and ponder on a few ideas that could bring the genre forward.
Dolgion Chuluunbaatar
Blogger
September 01, 2010

I am writing a JRPG Engine using Flashpunk over at my site, and was pondering on where to go with it, or better, how to make use of it. I'm not very thrilled with making a traditional game adhering to genre standards, so I'll share with you some of my thoughts on RPG design in general.  It's all loosely related to my previous post on non-linearity.

As I see it when playing the common RPGs out there today (Mass Effect 2, Dragon Age, Fallout 3), I find the main philosophies of RPG design: Bethesdas open-world games, the Bioware RPGs and JRPGs.

In the former, you are thrown into a vast world that you can explore and discover at your own pace and go almost anywhere you want. The main appeal of those games is the initial feeling of pure awesomeness of being able to adventure around in a different world.

Bethesda is very good at creating worlds that have a distinct feel oozing from the design of the world - from the textures to the proportions to the way characters talk to you to the quests. I've recently played Fallout 3 like a mad man. It took me something like 4 days of playing to get over the fascination of the Capital Wasteland.

It's mind blowing what those guys made with the franchise level-design wise. There is just so much to do and to go to, a feeling of mystique around every building and area. I loved it. Then the ugly feeling started creeping over me that I had when playing Morrowind and Oblivion. Disillusionment. 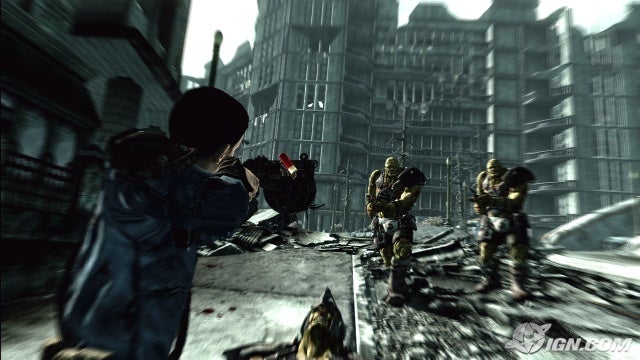 The world looks pretty, but there are problems. I started feeling annoyed by some quests even though the quality didn't decline. It became more and more apparent that the NPCs were just that - NPCs, quest givers and conversation-stations. Underneath the shiny graphics and beyond the fascination, there came to daylight the same old patterns. Go there, get me this item, kill this guy, talk to that woman and report back to me.

A really engaging story with deep characters that play an important role and connection to me, the player, was nowhere to be found in the wastelands. Of course there is the "Find your Dad" quest...but the "Do what you want at your own pace" design of the game brake down the initial feeling of purpose and need to find him.

Of course, it is partly my own decision if I want to do something else than the main quest - which is okay. With Bethesdas games it's always about sort of actively keeping the immersion in your own head, creating it and buffing it up by yourself, with the game giving you only part of the story and nudging you to imagine stuff yourself. You will go around and find a public telephone in the middle of total destruction, but that little reminder of there being actually a civilized society wakes emotions and ideas in your head.

I like those things, but then it might be a little too detached for me, for there are no cutscenes or really linear plot-heavy sequences in the game. This doesn't mean that I love cutscenes or linearity though, it's just that Bethesdas games lack for me this one element that is usually delivered by cutscenes and linear narrative. I suppose the real core target group of their games are people who do have that vivid imagination, who also have a drive to do every quest and find every secret.

I feel that Bioware's RPGs take the interpretation of the RPG genre from a totally different stand point. It's about building up a character while going along a very clearly defined path, and all content is created to make that path as enjoyable as possible. Freedom of exploration is mostly only second priority.

The thing with their games is that you have - within the clear constraints they give you - choices to make to switch from one rail to another. All rails are bound inside the realm of what is believable in the world, though, so you never really feel free to do anything you like. This also has the effect of coziness, for there is always a handcrafted path in front of you that to some degree has the guarantee of entertainment value from the creators.

I like those games because they give me the feeling of reading a novel.  There is arguable more going on plot wise than in Bethesdas games and in the end it's a fun experience. You're the hero of this story, and all you have to do is decide who that hero is and how he/she solves problems.

Bioware has been consequently refining their practices and improving their craft throughout the years. My only real gripe with their games is that they very clearly bring down any initial hopes for a really free world to explore. You only see what they want you to see.

(2D) JRPGs I'm the first to admit that I'm no expert on JRPGs. I have only played the old Final Fantasies in retrospect, and haven't really played famous other JRPGs such as Suikoden or Secret of Mana. From what I hear though, they don't differ in very major ways from the old FF games. I really do like the old SNES Final Fantasies. There is something nostalgic about them.

Even though I haven't played them as a child back in the early 90's, they have the charm of simplistic quests of saving princesses, flying around the world in huge zeppelins and saving the world from evil magicians. I agree that there are a ton of flaws with them. Check out this article. It sums up pretty much all of the things I find are "wrong" with them, though I wouldn't say that those flaws break the games themselves. It's part of the personality of the genre.

Funnily enough, I think the (2D-) JRPG genre has a ton of potential, especially in the indie gaming community. On one side, there is the obvious advantage of simpler content creation. A map is made as a tilemap, graphics are sprites and 2D is not at all less good than 3D. The other major advantage though is that JRPGs are so stuck in their dogmas and standards that a wake-up call would have a huge effect on the audience.

Why not make a JRPG that features a combat system never seen before? It went through my head to make a game where combat is not turn based or real time, but where you tune your party and AI much like you tune your football team in Football Manager 2010, and then let them loose on monsters. It also went through my head to make a JRPG where there is another hero somewhere in the world, who does quests using a "Player-AI", that imitates a players actions, all in real time.

Imagine going around the world meeting a farmers wife who begs you to find her missing husband. You "take" the quest, do something else for a week (in game time) and then when you go back, you find that this other hero finished the quest! And you could interrupt this other hero even while he's doing a quest, kill him, only to have him respawn at a revival stone like you yourself would! This is a real element of dynamic we'd have here, that can influence the playing experience tremendously.

If you take this thought further, imagine this "Player-AI" driving EVERY NPC in the world, the common item seller to other heroes to the king of a castle to the daughter of a magician. They all act in ways that a player would if he/she was to play the story of said NPC in a game dedicated to it. Its effect would be visible when the player influences their range of the world (the characters they themselves interact with, the places they go to and live in).

It would be fascinating to see how they react. This of course calls for a huge effort on the AI, but resources could be spared by simplistic graphics. Imagine THEN, that you could switch your control to any of those NPCs at any time, and try playing through THEIR lives. It's pretty mind blowing if I might say so. And all this in a tilemapped world with sprite characters and a good old JRPG fantasy setting.

In contrast to what you would expect from a JRPG (repair the magical thingy by finding the 4 stones of the elements blah blah), this innovation would have a huge impact on player perception and smash many a prejudice to smithereens. I'm contemplating on how to make such a game, and my JRPG Engine will be its foundation.

What do you think of that?