The Key to designing VR action games is "IN YOUR FACE"

There are no rules when it comes to designing VR games, but maybe we can examine what common features most action titles seem to require. So, what are the greats doing right and what are the must have gameplay modes that every VR Action game should have?
Sebastian Alvarez
Blogger
August 18, 2016 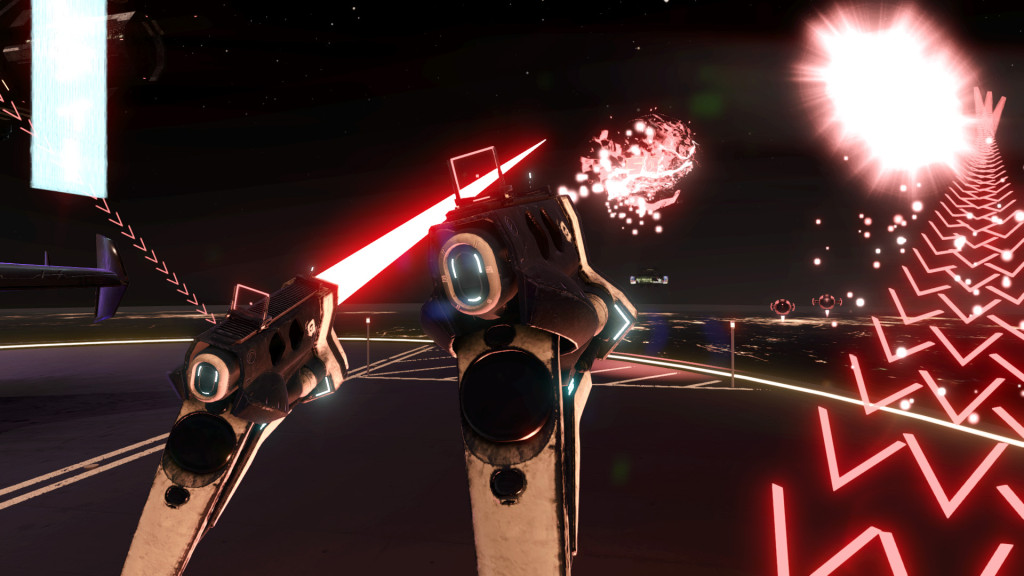 To dodge or not to dodge.

This single thought actually owns a modern 4 bedroom condo, with a quaint little fireplace, indoor jetstream bubble bath and a crescent shaped pool situated in the majestic high rise also known as my head. It has been there, living comfortably I might add, for the greater extent of my entire project. This thought consumes me yet I believe it is justified, considering that the top selling games on steam include features which force you to dodge, duck, dip, dive (you get the idea) creating an exhilarating experience. Games such as space pirate trainer, the current best selling vive game, is based primarily on this basic paradigm; move it or lose it, lose in potential sales that is. 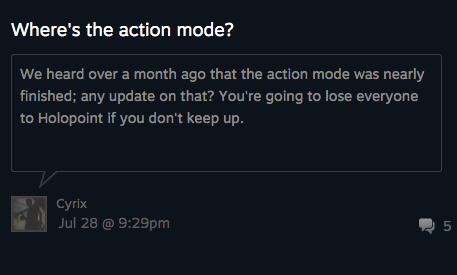 Let’s get to the point. The best room scale games have you right in the action. You are literally moving from a hail of oncoming bullets or punching them in rhythm of your favorite song; either way there are projectiles that are coming at you. Let’s look at two similarly themed games which were released at the same time. Bowslinger and Holopoint. As of this moment, the current overall score is “mixed” and “very positive” respectively between the two but another stark difference is in the gameplay. Holopoints only gameplay mode is based on constantly acting and reacting to the environment around you. Shoot, dodge, repeat. Bowslinger, on the other hand, has a variety of gameplay modes featuring much more leisure activities. In the image above, Cyrix echoes the sentiments of many players when they ask for a more active mode in the game. 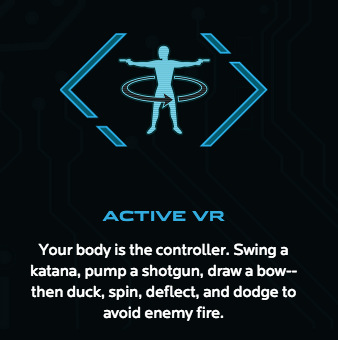 Space Pirate Trainer, Holoball, Audioshield, and the recent popular Raw Data also have just one main gameplay mode, which simply put, consists of objects moving towards you. Enemies zip, Balls fly, and bullets zoom placing all the action in your face. They are all excellent titles and they all have projectiles launched at the player forcing them to either shoot, hit or dodge to win.  Raw Data calls this “Active VR”. On the forefront of their site, this is placed as a main feature. A feature that is necessary in every VR action game. A feature that customers ask for in their game. If you don’t have this feature you’re going to lose everyone to your competition. Without this feature people will wonder “where’s the action mode?”

“There is no need to dip, duck, spin, deflect or even dodge anything”

But now let’s look at the most popular VR game on steam, which was created by steam, Longbow from The Lab. Another bow and arrow game that has you shooting at targets with the big difference being that the enemies are not moving towards you, but towards a gate outside your castle. There is no need to dip, duck, spin, deflect or even dodge anything at any point during the game. What Longbow does do is deliver an “action mode” that keeps you aware of your environment, has you act at a moments notice to defend you gate and creates urgency by reacting to the choice of balloons that fly after each headshot or enemies reaching the wall. However, what all these games do have in common is this very sensation of excitement stemming from the gameplay.

That gameplay being the necessity to act with a strong purpose. Here an analysis of these common elements.

The main focus to VR and Action is not to force the player to dip, duck, spin, etc, but to give it purpose. This is what makes a compelling action mode, to engage in an active environment that reacts to you. Give the player this sense of urgency to achieve a goal under a matter of time. Add a lasting game mode that has a clear purpose. So, what about the thought of adding dodge or not adding dodge which still resides in the highrise? It still lives comfortably but Purpose has the pent house suite at the top floor, with 12 lavish bedrooms, an olympic sized infinity pool, along with a reasonable sized yet charming grand piano.

Written by Sebastian Alvarez of Frame Tale Studios, LLC. You can check out my VR projects at frametalestudios.com or follow me on twitter @sebasrez