In part 3, we’ll focus on how emerging tech and trends may shape the eSports in the future, and how these innovations might help steer the industry toward mainstream adoption.
Andrew Heikkila
Blogger
July 02, 2017

In the Future of eSports Part 2, I discussed how different existing titles and genres compare in balancing the player and the spectator experience. In part 3, we’ll focus on how emerging tech and trends may shape the eSports in the future, and how these innovations might help steer the industry toward mainstream adoption.

Part II of this series focused on the elements of specific games and genres outside of the MOBA sphere that make games popular, successful, and eSports worthy. We also discussed shortcomings inherent to eSport’s current iteration, and how there aren’t currently any working titles or genres that will push eSports toward mainstream adoption. This is mainly due to, overall, a lack of balance between the player experience and the spectator experience. First person shooters, for example, are extremely fun to play, but are not as fun to watch--just like football wouldn’t be as exciting to watch if the only perspective you had was from inside one player’s helmet.

What we didn’t talk about as much is what these titles are not and could be doing, especially with the way that technology and innovation are changing the ways that we play and consume video game content. Twitch streaming and content on-demand change what it means to “go mainstream”, while the virtual reality (VR) and augmented reality (AR) revolutions could challenge what it means to be an “eSport”. Artificial Intelligence (AI), finally could bring gaming and eSports to its highest levels yet, but also risks making players themselves obsolete.

“As TV slowly recognizes the internet we should adopt new thinking and architecture. I want my primary screen to be a search bar. A search bar that pulls in content from every provider that I subscribe to (or that is free). I want it to prioritize ad-free content over ad funded. 4K content over SD. I want a Live TV button In this sub-menu, I want shows my friends like to appear easily. I want shows that are trending Live or that my Facebook friends are viewing at that time to be shown…”

This is interesting to me, because it sounds like what this guy is describing (besides the Ad-free part), is a mix of Twitch, Youtube, and Facebook. Personally, I ditched TV and have been watching less Netflix/Hulu/Crunchyroll because I’ve been watching Twitch. While many think that the future of eSports will be on Twitch, I’m more convinced that since YouTube recently began offering live streaming and ESPN is facing an uncertain future, mainstream adoption will mean eSports live streams beyond Twitch. YouTube live streaming, for example, could replace TV broadcasts for many households in the near future. This “content explosion” and the switch from “television” to pure streaming may help ease eSports into the more mainstream arena as broadcasters like NBC and ESPN loosen their stranglehold on competitive primetime placements. 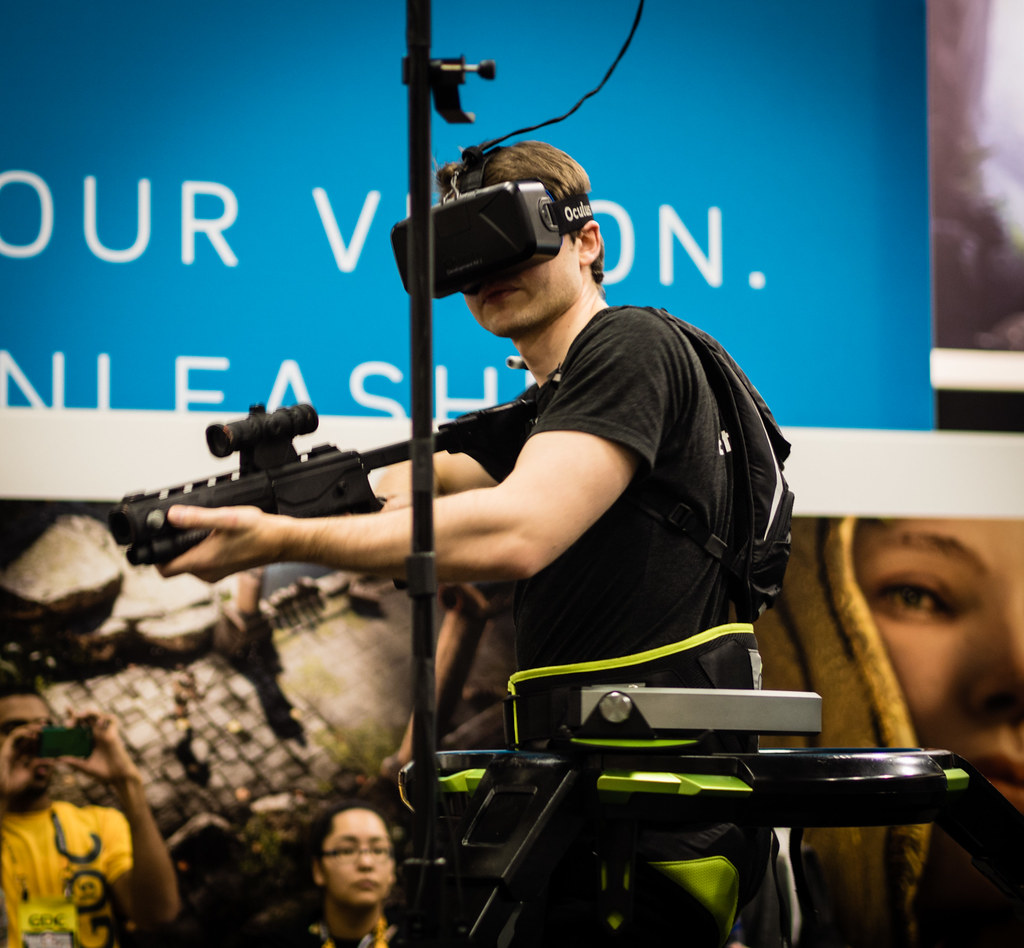 Though limited to select phones and consoles, virtual reality (VR) is finally coming online, with Samsung leading the charge via its VR Gear for Galaxy S8 and S8 plus for the more affordable mobile options, and Playstation VR leading the console offerings. While titular offerings are currently slim, one game has the potential to revolutionize eSports completely — once the bugs and kinks are worked out, of course. That game is Sparc.

Sparc is a VR experience that’s sort of like a cross between tennis and dodgeball set in a Tron-style arena. The idea is that you “throw” and “deflect” a virtual ball, trying to hit your opponent while dodging their projectiles at the same time. There’s a level of athleticism involved that the average, non-gamer spectator could relate to, and the ability to spectate in this type of 1v1 environment could easily support multiple viewing angles. The only problem with this specific title (beyond the general bugginess of VR) is that it might not be dynamic enough, much like 1v1 fighting games, to hold the attention for long instances at a time. Nevertheless, VR has high potential to normalize and bring mainstream popularity to the world of eSports. When you mix in Augmented Reality (AR) and the Internet of Things (IoT), we start to get into what can actually be considered an eSport vs. just a regular old sport with technology.

For those unfamiliar with the IoT, it’s essentially the network of connected devices beyond your computer that communicate with the internet as well as one another. In the future, it’s predicted that almost everything will be collecting and sending data for analysis, including smart advertisements, smart trash cans, and even smart cars. When you layer AR on top of internet-connected everything, essentially you get advanced games that resemble Pokemon Go. Pokemon Go was actually one of the first games to explore AR (overlaying the existing world with virtual projections) and simultaneously reach mainstream popularity. I’m less sure of what these games would look like, or even if they could be considered “eSports,” because besides Pokemon Go, the only AR gamification that I’ve seen is AR rock climbing--which relies on the base layer of reality and actual rock climbing for a subject to modify, making AR eSports likely too close to original sports to set them apart… but who knows?

Just like Streaming, AR, and VR, Artificial Intelligence (AI) has also come a long way. What’s amazing to me is that we can develop computers like Deep Blue that can beat chess grandmasters, or AlphaGo, the Google DeepMind powered AI that beat Go master Lee Sedol, and we still get companion AI as bad as Sheva from Resident Evil 5. Jokes aside, many are asking just what type of impact AI will have on eSports and gaming in general.

On the plus side, we could learn how to optimize jungle routes in League of Legends, for example, by watching a computer that’s already calculated every conceivable champion, build, and gank scenario for multiple matchups. We could finally create opponents that are just as good as those we come across in multiplayer matchmaking. We could create the perfect player — but that then begs the question: what’s the point of playing games if you’ll never be better than the computer? In relation to eSports, advanced AI is still pretty far out there. It could potentially create the best competition imaginable, a new sort of Mt. Midoriyama for those familiar with Sasuke and Ninja Warrior--but it also has the potential to make competition obsolete as well.

In the end, whatever game emerges to push eSports into the mainstream, it will likely be emerging using tecnology that most of us aren't familiar with now. Whether via Twitch or YouTube Live, utilizing VR, AR, the IoT, or even AI, the future of gaming is here — and it’s ready to usher in the future of eSports as well.

This concludes the three part series: The Future of eSports. Check out Part 1 and Part 2 if you’ve haven’t already.