The Art of Shadow of the Colossus (3/6): Designing Agro

Where we go into the crucial role of Agro in the success of this title.
Frederic Fourcade
Blogger
March 21, 2014

This is the third part of my series of articles about Shadow of the Colossus. Here are the previous ones : introduction, and gameplay and story 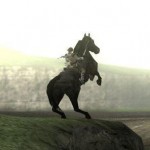 Agro is a very important character in the hero's quest. Somehow their relationship resembles the one between Ico's hero and Yorda, but differs mainly in the fact that Agro is not the goal of Wander's quest, but a companion, helping him to reach it.

Agro, a character in his own right

First of all, Agro must be recognized as a true video game character. Unlike many games where horses are nothing more than vehicles for transporting the player, Agro here is a true companion for Wander. This is suggested mainly by the control scheme of the player to direct Agro. In the manner of Yorda in Ico (or any AI companion that can be found in other games), the player controls only Wander, even when he is on his horse's back. We can only make Agro move by spurring him, or pulling on the reins to one side or the other. This type of control is very close to what is found for example in Trials HD.

This avoids breaking the immersion in the game through the hero, while giving Agro his own personality: he can refuse to do certain actions (such as falling off a cliff, which helps to keep coherent world bounds) or take initiatives (jump a short distance).

Similarly, when the hero is not on his back, Agro has a unique and precise behavior. We can sense that programmers have spent time creating a real personality for him. He tends to flee the colossi, mostly, while neighing from fear. When he is called, he comes to Wander with apprehension, trying to avoid explosions, shots, etc... This makes the game more difficult, but by giving Agro a realistic or, at least, credible behavior, this game design avoid disrupting the immersion in the game world, and creates a real relationship between Agro and Wander.

This is very important in the scenario (see below).

Indeed, it is clear that in this (almost) empty world, apart from a few "not-so-much talkative" colossi, the hero might feel a tad lonely. Fortunately, there is dear Agro, always close to the hero, with his quite credible animations, sounds and behavior, which reminds us that if we cannot do it alone, we shall do it with him.

There are several design choices in the game that build up the relationship with him. First, as we have seen, everything has been done to give Agro a clear and credible personality. 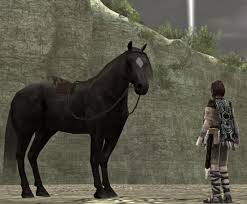 Then, the way we call him is very reminiscent of what we could do in Ico, with three ways of calling his companion (Agro in SOTC  or Yorda in Ico ) depending on the distance. Finally there are all these interactions which can be achieved with him that gives a rather rare richness to this "vehicle" (which, if you followed me in this article, is actually much more than that): we can climb onto him, hide on any side, or fight while straddling him. Truth to be told, many of these aspects are not essential to the completion of the game, but adds to the simulation orientation which is the heart of this game (as we discussed in the second part of this analysis). This attention to detail is also reflected in the ability to cling to eagles or doves, which as useless as it is fun.

Of course, you only really assess the power of the relationship between the player and Agro during the scene preceding the meeting with the final Colossus (which I will not here spoil for you here, but those who have played the game know exactly what I mean, and others should not even be reading this in any case). For comparison, in Red Dead Redemption , never does the disappearance of a mount provide any kind of emotion (there you go, I just had to spoil it).

But Agro is not just a screenplay or immersion artifact, he is an active component of the whole gameplay, as we shall see immediately.

In addition to all the acrobatics the hero can achieve with Agro, the latter has two main roles in terms of gameplay.

Firstly, it is primarily used to help Wander in his exploration of this totally unknown and quite large world. We could do without him most of the time (except for the bridge before the last boss, seemingly), but he helps saving time, and makes, at the same time, the player use and interact with him (because remember, to move Agro, we must actually interact with him via the hero), which enables the building of the strong relationship between the horse and the hero / player. No fast travel in this game, you have to go through the moors on horseback to reach the areas where the giants are (simulation, realism, etc ...).

Secondly, he also serves on a few occasions when fighting against the colossi. He is only present in fights against the giants #2, 4, 9, 10 and 13. Most often, he is mainly useful to flee from the colossus, giving the player time to catch his breath and take a little distance from the battlefield to analyze and adjust his tactics. But he actually plays a crucial role against the giants #10 and 13, where the hero needs to match their speed, which is obviously only possible on horseback (please note that this happens towards the end of the game, thus strengthening the bond between the player and Agro).

These gameplay tools eventually give real substance to this character, which by this mean gives a whole new sense of Wander's journey, much stronger than, for example, the relationship between Link and Epona in Ocarina of Time (which still made a strong impression at the time, and rightly so, but that's another story).

In the next section, I will discuss the graphics and art direction of the game, involved in the emotional power of this title.