The Anatomy of a Shmup

In doing research and observation of online/console shmups, I figured I'd share some of my findings/rules that I'm following while creating my own game.
Michael Molinari
Blogger
February 18, 2010 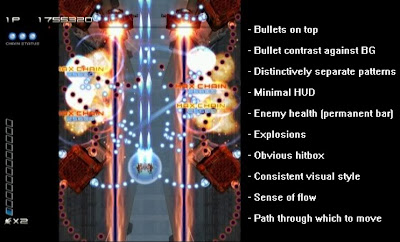 If I haven't made it clear yet, I'm working on another shmup. This time, since I'm not restricted by a competition deadline, I've been paying close attention to the art behind creating shmups, both commercially and online. The big boys appear to be doing everything right. I only ever have a few nitpicks about them. If I ever feel like I don't like one, it's because of personal preference, not something that I can point out as being done poorly.

As for the indie shmups available for free or for a few bucks, they are hit or miss. Sometimes the design is ingenious, but the presentation is lacking. Sometimes the visuals are spectacular, but the gameplay is uninspired. Sometimes the game is pretty good, but could have been pushed further in various areas. There's a different reason for each game, but the importance here is that I'm taking notes on all of it.

Below I've gathered together a list of what I've observed over the months and years of playing. The ideas are in no particular order and only represent a fraction of my records. I thought I'd share them so you, too, can pinpoint a reason for any given game not being quite what you had hoped.

Keep in mind that not everything I say is required for every shmup. They each have their own place. Most of these notes are for scrolling and arena shooters, while some apply to any game or piece of art.

As I've said before, all of these suggestions are optional and in my opinion. They're all things that I've seen implemented beautifully in console/arcade releases and miserably emulated in free online Flash games. Since I'm making a free online Flash game, I'm going to do my best to maintain a level of polish and attention to detail that allows the game to stay together as a whole. Even a single out-of-place sound effect can ruin the entire experience.

To kind of drive these points home, I'd like to use the same identifying features from the screenshot of Ikaruga above and apply them to Space Invaders. Ya know, for fun. 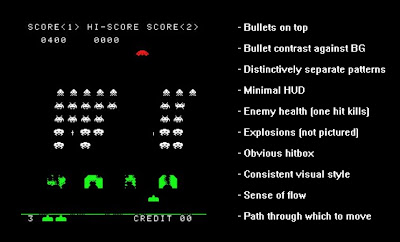 It would be mean to point out the games that I feel could have been more successful, even by just following my suggestions above, so I'll just talk about the free shmups that did a lot of things right.

- Arcanacra: Excellent flow of gameplay, superb use of sound (The enemies/attacks are synchronized with the music), enemy bullets stay visible, enemies show signs of taking damage, there are popcorn enemies, and the boss explosion is worth the trouble. This is the best free shmup that I've seen do so many things so well.

- Heavy Weapons: Great use of sound (especially of enemies spawning nearby), effects and menus match visual style of the game, and of course there are many popcorn enemies.

[cross-posted from SHMUPtheory]
Art
Get daily news, dev blogs, and stories from Game Developer straight to your inbox
Subscribe