Shadow of the Colossus (6/6): Conclusion

Despite a few mistakes in the design, Shadow of the Colossus is the quintessence of what makes a masterpiece: when the whole is greater than the sum of its parts.
Frederic Fourcade
Blogger
April 27, 2014

This is the sixth and final part of my series of articles about Shadow of the Colossus. Here are the previous ones:
- Introduction
- Gameplay and story
- Designing Agro
- Visual Design
- Music 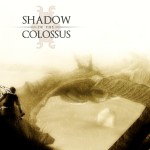 I didn't initially plan to write that many articles about Shadow of the Colossus; I merely intended to describe how I felt about the game. But as soon as I started analysing every aspect which make it a genuine work of art, I just couldn't stop digging deeper and deeper. There are so many wonderfully crafted parts in this game, that I was surprised myself. Nonetheless, there are some drawbacks that could have been avoided. We'll quickly talk about them before concluding about this amazing game.

There are a few drawbacks in Shadow of the Colossus which, fortunately, don't alter the quality of the journey experienced by the player. The main one is the presence of a HUD (Heads-Up Display) which impacts the immersion of the player in the game. It is a significant flaw because, as we have seen, immersion is the leitmotiv of the game. It could have been easily spared as most of the data are already 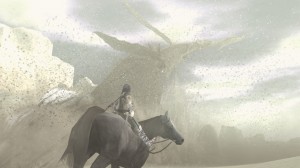 available ingame : weapon in hand is displayed on the player's model, stamina is communicated by vibrations and alarm sound, colossus' health is displayed through their weakspot. The only thing that should be reworked is the avatar's health, but there are many options available to display it in a non-intrusive way (it may even be hidden, as the game is mostly about avoiding injury). Ueda did it well in Ico, and I wonder why he chose to do differently in Shadow. The second problem is that the camera proves to be difficult to manipulate and often gets stuck in walls or corners. It would be a really annoying problem if the environment was not so vast, and if there was not this very useful button that fixes the target on the colossus. On the other hand, we must remember that free camera problems were very common in these years.

All in all, very few technical mistakes have been made when developing this game. But some choices remain debatable. The first one is (sorry for the spoil, but you should not read anyway if you have not completed the game) the reappearance of Agro in the epilogue, which greatly minimizes the power of the scene of his “death”, on its own beautifully crafted. I feel resentment for all these works (mostly movies) that don't follow through with the drama of this kind of scene. The second one is the fact that Wander (the “hero”) talks. When I started this serie of articles, I had only played it once (I played it twice more since then), and I was sure that he was mute (as Link is in all 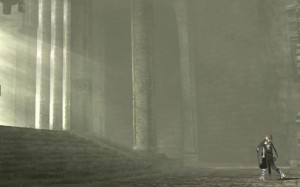 Zelda games). Well, he is not, and he speaks in the introduction of the game; but he doesn't talk anymore throughout the rest of the game. During this conversation, the player feels like a spectator, not an actor of the scene, which breaks the spell of immersion. A mute hero (as weird as it sounds) is a lot closer to the player, as the player cannot converse with characters in-game. Since Wander is mute throughout the rest of the game, it would have been better to shape the intro differently so he wouldn't have to strike a conversation with the temple's god. Finally (and that's a minor point), I would have liked it better if the colossi could smash and kill the hero with a single blow. As the game is crafted as a realistic confrontation between a simple human and a gigantic creature, nothing short of a perfect performance should be required to prevail, and the threat of instantaneous death would have heightened the challenge, the pressure, and accordingly the pride of emerging victorious.

A model of artistic creation

Shadow of the Colossus sets a standard as to how video games should be crafted in an artistic way. It mixes a lot of aspects from different art forms in a masterpiece that is, as a whole, greater than the sum of its part. Each aspect is not only a great achievement but is also completing what other elements could not communicate. Moreover, there are no redundancy in them, as each part brings its own emotions, specific to its own art. Music, visuals and scenario each bring their own contribution to the whole package, and, last but not least, the gameplay ties all these parts in a coherent piece of fine art (where many games only put gameplay as an intermede between cutscenes, and vice-versa).

It is common to say that there are mainly two ways of creating art : one is the product of the artist's instinct, where he “creates away” as ideas flow through him; and the other where the artist crafts a raw version of his work, then fine-tunes it over and over until it reaches the form he wanted to create in 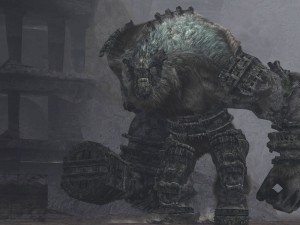 the first place. It is very likely that Fumito Ueda combined both ways to make his masterpiece, because we can feel the uniqueness of this game, both in the emotions it gives us and in the way to communicate them. Generally, video games are difficult to create using the instinctive way, because coding is a long process, which requires testing, fixing, refactoring and so on. I guess experimental games using very few lines of code (or no code at all), thanks to ready-to-use game engines for instance, can be created this way. But, as it is for movies, they are tagged in the “experimental” category and are rarely recognized as real video games. On the other hand, we find more and more of the second kind of games, where the game is released in an early version (mostly free-to-play and social games) and are improved upon, modified over and over to match either the players' desires or business constraints (or simply copy-pasting an element from other succesful games).

The choice of making this game a simulation kind of game when most of the succesful games were arcade ones, makes it a game like no other. At that time, many succesful series were turning to a more arcade-like style of play (like Resident Evil, Call of Duty), and new succesful IPs were also arcade-oriented (God of War, Jak & Daxter, Ratchet & Clank, etc...). Even Role-Playing-Games were reducing their RPG components for a quicker and easier game experience. But fighting against colossi as it is done in Shadow of the Colossus is one of the best boss-fighting experience ever, as the player is forced to use his own cleverness to beat the giant creature.

To conclude, we have seen that, by analyzing every aspect of this piece of art, everything was made in a consistent vision of what the player should feel when playing the game. This gives us in the end the ultimate experience that we should be expecting from the most artistically complete medium there is : the video game.