In a Gaming and Simulation class at the Pennsylvania College of Technology my group of four got started with making our very first 3D game using the Unity engine. Watch as the game grows from idea to completion on the Yotes Games blog!
Tony Yotes
Blogger
September 16, 2013 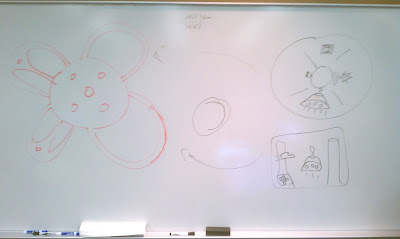 Yesterday in my Gaming and Simulation class at the Pennsylvania College of Technology groups were formed and project brainstorming began. My group of four got started with making our very first 3D game using the Unity engine. Watch as the game grows from idea to final product over the next 21 weeks. 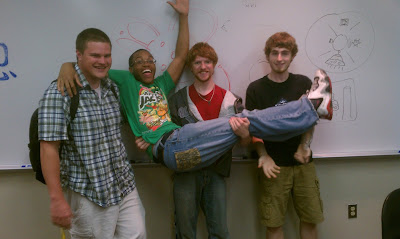 Here is the creative team behind what we're calling Mach-Arena. A game that combines the fast-paced action of racing with the thrill and combat of a deathmatch. After brainstorming over a few ideas for a feasible project this was the one we decided on as a group.

This is me, Tony Yotes (but everyone calls me Yotes). I'm taking a director/producer role, keeping the game's design grounded in reality, organizing code structure, writing the game design document (along with any other paper the teacher wants out of us), and maintaining the game's development schedule so that no one is staying up till 3:00 am working on this thing every night. I'm bringing every bit of experience I have to the table and I intend to set an example for future students in the Gaming & Simulation program. I don't mind doing all the writing because it's actually fun for me. I like coming up with game ideas then writing them down in an easy to read/understand way and I love breaking the ideas down into things that could actually be done at my skill level.

I bring the knowledge and stories of other game designers that I listen to and read about, taking their experiences and using them to positively shape my own by avoiding mistakes common to game development novices like ourselves. I'm also documenting the entire thing on my yotesgames.com blog so other people can see what it's like developing games for school.

Ben & Charles are pretty much inseparable. Even last year they were always together working on some game project. I like working with these guys because they were in my group for the game we made last year. Over that time I figured out how these guys tick and they are the perfect people to help me practice teamwork. Ben is taking a lead programming role in the project while Charles takes on game design.

Ben is the greatest programmer I've ever met. He simply loves to make things work. He gets joy from using code and logic to bring game ideas to life. Ben's passion is great for morale and he never ceases to amaze by coming in each day with another game feature coded and working perfectly. He is willing to pull all-nighters to get things done (as he proved many times last year) and is very open-minded and reasonable.

Charles is an interesting member to watch because I'm seeing him grow as a game designer over time as he practices making games for himself. While I used countless tutorials, podcasts, blogs, and commentaries to learn about game design before (and while) practicing it myself, Charles simply dives right into development and learns through experience alone. I've watched him make plenty of mistakes and his ambitious ideas always get the better of him, but I'm seeing improvement in his ability to start, develop, and finish products. 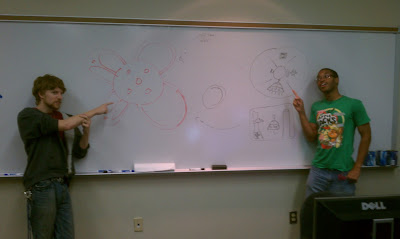 He really just needs somebody to keep him grounded and going on a straight path because his ideas are truly great ones but he goes overboard on the all too fun part of coming up with cool stuff and his ideas just stack up too high. His enthusiasm is contagious and I'm pretty sure he never sleeps. He's always working on a game when I see him whether it's a school project or a game of his own. For this project I'm trying to channel his creative ability and energy into developing the actual game rather than just the idea and hopefully teach him how to finish simple projects then add all the infinite cool ideas after something playable is up and running.

I've known Ryan since last year but he was in a different group for the last project. He was pretty much screwed over because his team abandoned the project, forcing him to do almost the entire Game Maker project by himself. It turned out well though and he got a good grade while his team got what they deserved. I'm interested to see what he can contribute to the team. Hopefully his poor experience last year didn't demolish his collaborative ability.

Getting to work on this thing is giving me the warm fuzzies already and I know we're going to produce something awesome this year. Hopefully by documenting this project someone considering taking a major similar to this will be inspired to go for it. I seriously cannot imagine being in any other IT major, but that's most likely because my heart & soul scream for game design. 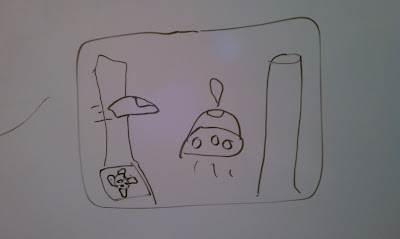 Taking lessons from last year into account, we should be able to finish our game with a reasonable work schedule due to it's feasibility compared to last year's project. Unlike with our last project, I will be asserting myself and taking more control of the project's design. I let my opinions fall on death ears last time and just went along for the ride, leaving me with negative feelings for the project's outcome. With every decision I make, I have multiple concrete reasons for it's necessity and will defend them until  they are understood or overruled by a genuinely better idea. 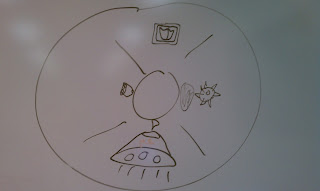 I already feel like I made a big difference this time by urging the team to make a game that's much less ambitious, able to be built upon, and graphically simple. Last year I learned to cooperate, stay open-minded, and not force my ideas onto other people while they did so to me. This time I'm going to learn how to assert myself and gain other people's favor through reason. I'll learn something new and get more team experience which is infinitely valuable in the game industry.

Making this game is gonna be a fun ride. Keep up with how it's going at yotesgames.com.