An run-through of how I created levels for Ruin, a physics-based puzzle game, while planning around player knowledge and the threat of accidental victory.
Devon Wiersma
Blogger
April 18, 2016

I’m currently working the puzzle design (or level design, whichever you prefer) on Ruin, a 3D physics-based puzzle game where the player is tasked with guiding a caravan through reinforcements of enemy towers. Of course by ‘guiding’, I mean destroying all obstacles in their way in a violent whirlwind of destruction. The caravan is constantly moving, so the player must destroy the towers and enemy units in their way in before the player units enter the enemy’s threat range. 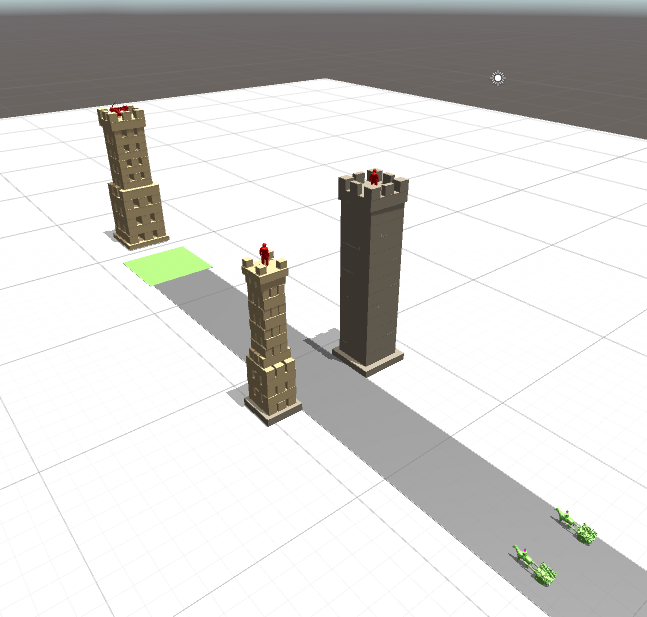 Ruin, as it stands, is just in its prototype phase, and as such is only going to incorporate what we absolutely need to get the feel of our game across. So, for the time being, I’m limited to working with a few base tower types: 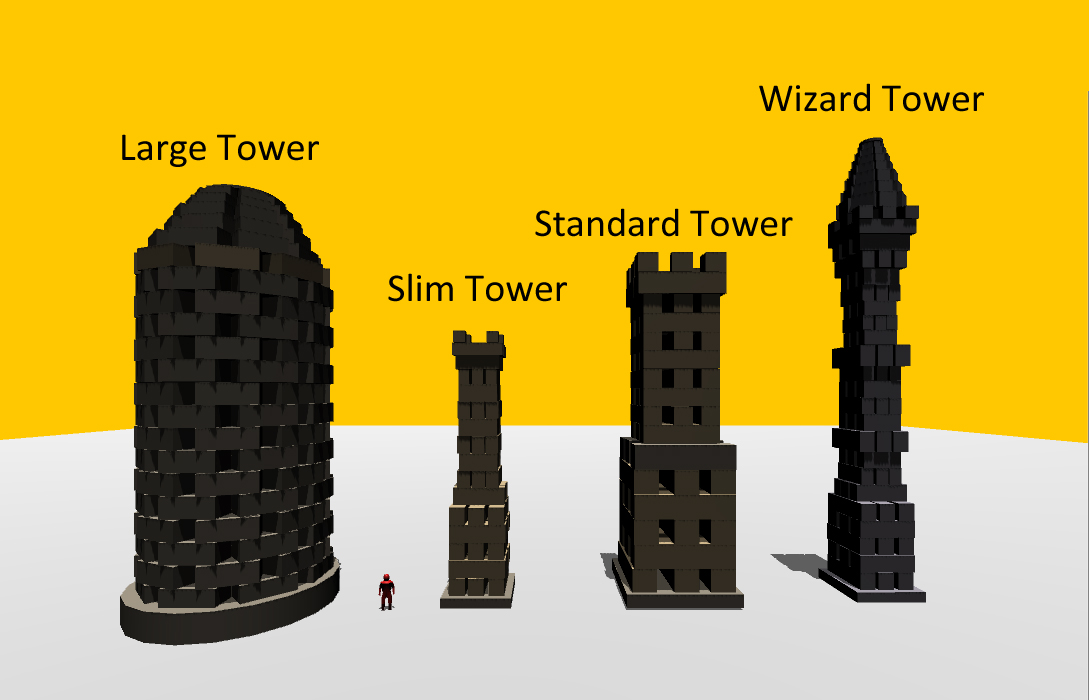 As a general rule, towers are more difficult to knock over the larger they are. The wizard tower, however, is impossible to destroy and must be navigated around and avoided however possible. All the properties of the tower’s blocks, such as weight, drag, ability to burn or be affected by bombs at all can be changed in-editor.

My primary goal is to address the use of most strategies and bombs the player would conceivably encounter throughout the game. As such, I’m going to be creating a different level for each of these and as such, a lot of these levels will be shorter than they would be in the final product.

My secondary goal is to address the problem that many physics-based puzzle games (and even regular puzzle games) have - the notion that the player could conceivably ‘brute force’ a puzzle and solve it in a way that it wasn’t intended to be solved.

My first level is simple - teach the player about their ability to click and place bombs. My only potential problem with this level was the potential for the player to destroy the first two towers with the bomb and click to knock the final one over, especially since my original design had two slim towers up front. To rectify this, I changed one to a standard tower to make it visually more sturdy and adjusted the weight of its blocks in order to prevent the player from simply bombing it apart. This way, they would be forced to use their only click to destroy the two. 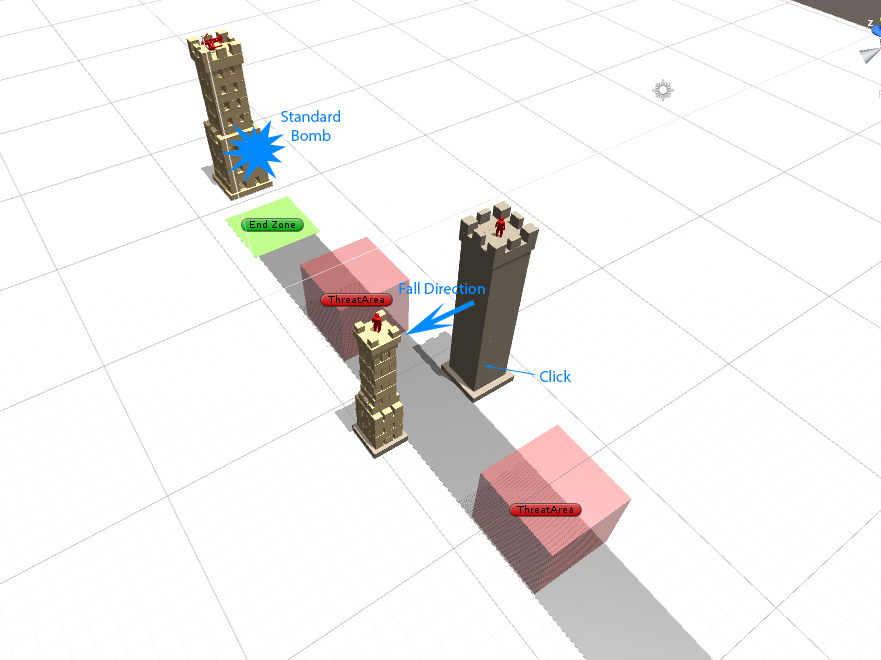 For my second level I need to introduce the firebomb. As this level would likely take place after the player is familiar with the core gameplay of escorting the units, an increase in difficulty should be expected. I’ll also be introducing walls to the player - while not exactly threatening (most walls aren’t. Usually.) they are an obstacle the player will need to navigate through. 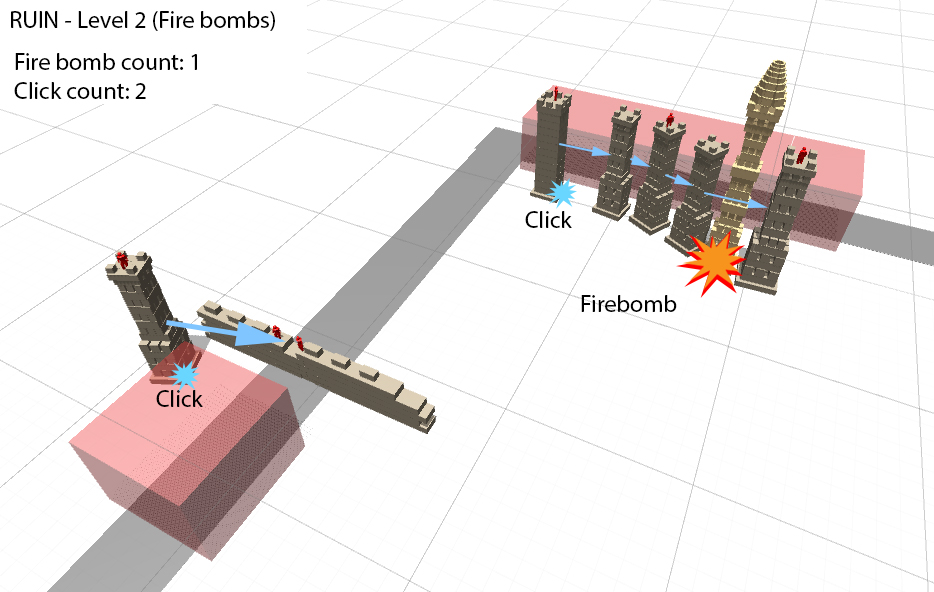 I limit the player’s bomb placement to firebombs since I don’t want to challenge them too excessively at once. The first wall and tower is a simple enough design to be intuitive to the player to solve, the line of towers on the other hand, isn’t. By now the player would have encountered wizard towers previously and know they’re unaffected by clicks or physics. This tower is the only thing in the scene with a wood texture on it to prevent any unexpected consequences of...well...firebombing everything, and it should tip the player off to the solution to the puzzle.

If the player knocks over the line of towers before destroying the wizard tower then the last tower will remain and destroy the player’s unit, so the firebomb must be used.


Level three will introduce the magic bomb, as well as giving a feel for more open-ended levels the game will feature, where units will make their own paths according to the most direct route.

In order to achieve this, I widened the movement path. To introduce the bomb I used the renaissance tower - our tower designer created this tower to be able to withstand losing a few different blocks removed from it, however the magic bomb will tear it apart easily. 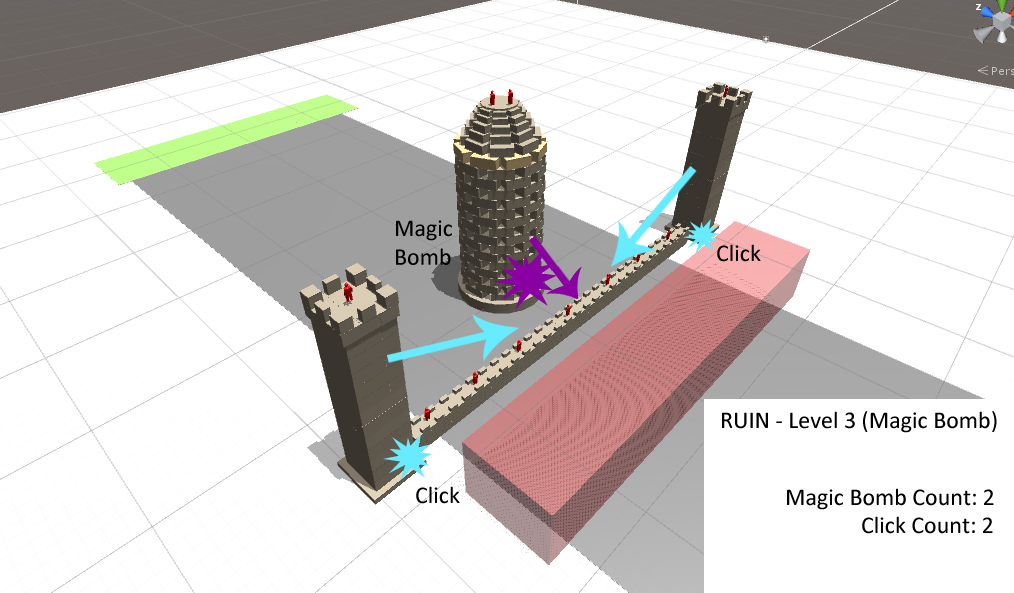 The player is supplied with two bombs in this situation since one magic bomb may not be enough for the player if they place it incorrectly. This won’t pose a problem in terms of the destruction of the other towers since these need to have a controlled fall to effectively take out the units beneath them.

For my final level I’ll incorporate the use of portal bombs. The power of portal bombs come primarily in their ability to work anywhere, and as such I really need to consider the entire map in their usage, especially because the dropping of bricks can be very chaotic. 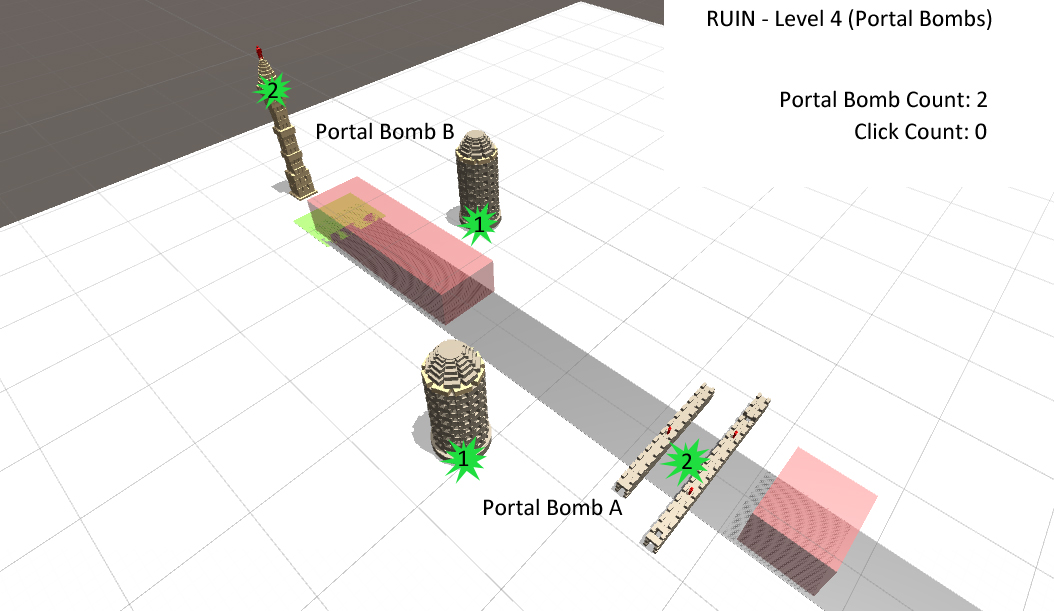 This level is more open ended in its solution, since the portal can pick up both wall bricks and tower bricks, leaving the player free to decide where to drop them. It’s fairly easy to solve overall, but is a good first experience with a bomb that acts much differently than the player and doesn’t ask too much in return.

Thus concludes the designing of my first four basic levels that introduce elements of our design to the player. As our project goes on and we start playtesting Ruin these levels are no doubt going to be iterated upon and expanded.