This is what it is like to take an old RPG from the Gameboy Advance and turn it into a modern day Roguelike while still preserving the spirit of the old.
Andreas Kuni
Blogger
June 03, 2021

Gang of Paws (GOPaws) is a game that I have worked on for years. You go through several worlds. Each is packed with battle encounters and upgrades. The goal is to make it to the final world and defeat the big bad boss. It is a reimagining of Megaman Battle Network (MMBN). In the very likely event that you have not heard of MMBN here’s a short summary:

Megaman Battle Network (MMBN) is a deck building RPG series from 2001 where you play as MegaMan.exe. The plot is weird, but just imagine that your antivirus program became alive and went on to save the world from hackers and computer viruses. You go through the main storyline like a traditional JRPG with an overworld map, interrupted by the occasional uninvited random encounter. The hybrid battle system is where everything shines with the power of a thousand light bulbs. First, combat is paused and you pick cards from a hand you are dealt. Then combat is unpaused and you get to move around and use the selected cards to damage the enemy while dodging their attacks until a timer runs out and you repeat step one. Watch the first 5 minutes of the following video to get a better idea how MMBN looks in play:

These games are absolutely  awesome! If there was a cult dedicated to spreading the word of MMBN, then I would be the high priest, shouting binary computer code from a podium until the very moment where the nerd police kicks down the door and hands out tickets.

This post is about the great design of MMBN and how GOPaws either kept, removed or changed that design. 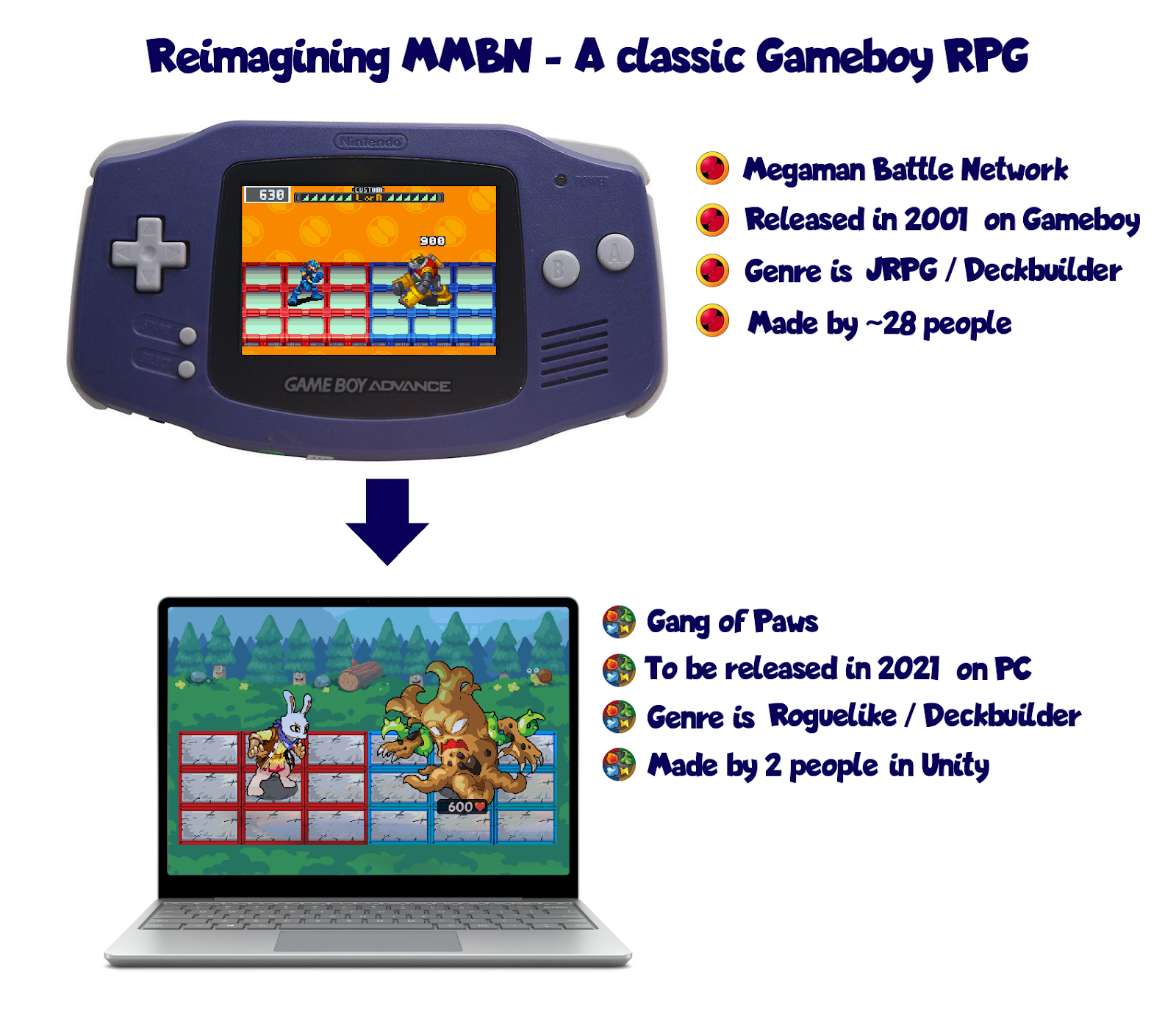 MMBN is set in a ridiculously over-technologized future. The main characters are spunky kids and their anti-virus programs. The enemy are hackers, viruses and an evil mustache that says “mwahaha” a lot. The battleground is cyberspace. The plot revolves around preventing cybergeddon and saving the internet.

For GOPaws, most of my design decisions are pragmatic. The theme became “Wizard Pets” because the pose for casting one spell can easily be recycled for casting others. Literally anything can happen with the wave of a hand when magic is involved.

I wanted every monster and boss in Gang of Paws to also have surprising personalities that would be revealed to the player during conversations. But it was more than I could carry as a solo developer so the feature was dropped. Since for me, the most important thing was getting the combat system right. 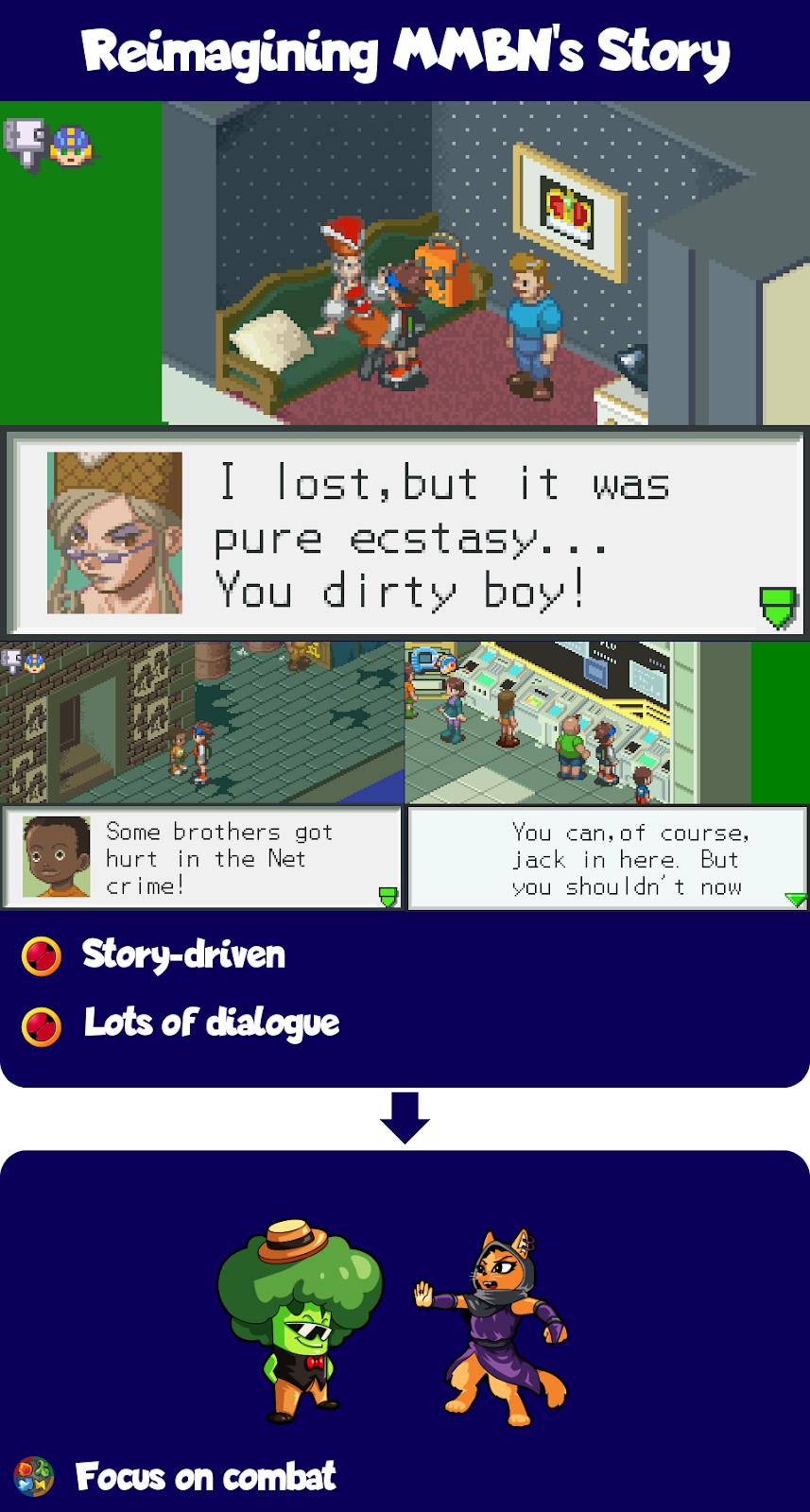 In MMBN, you have a deck of 30 cards including duplicates. It is built before battle from a reserve of cards. The problem was that you accumulated hundreds of cards in your reserve. It is very time consuming and breaks the flow when making changes to the deck.

GOPaws removes the reserve entirely. So new cards are instantly added to the deck when picked up. The player chooses which old card to discard when the deck limit is reached. This change also has the benefit of adding more interesting choices to the game. Example: Should you bloat your deck with the weak half of a combo card, just in case you pick up the other half later? 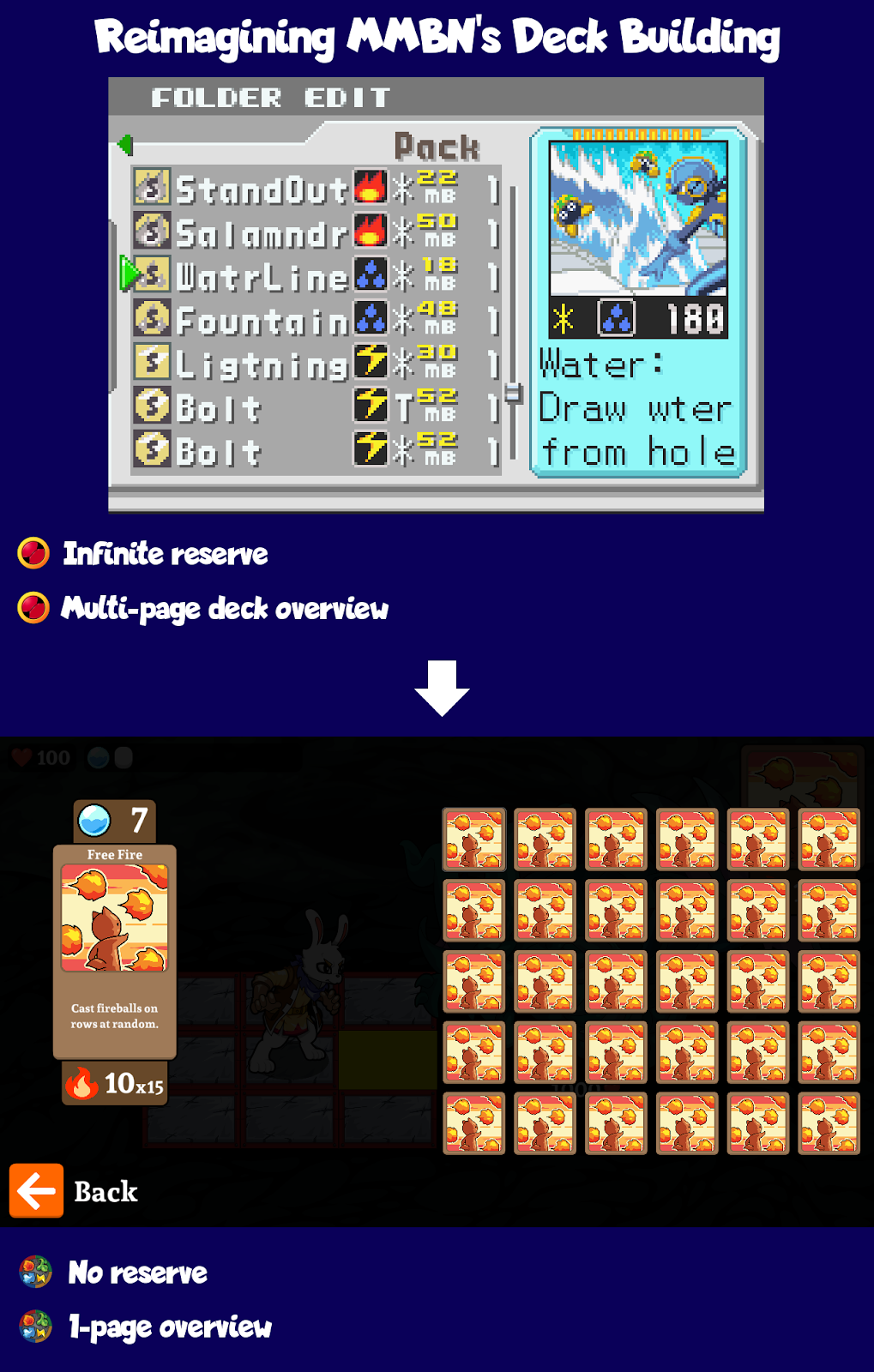 Cards in MMBN had a description of at most 27 characters. For the more complex cards, it was near-impossible to understand how to use them correctly. Fortunately, some of the cards had artwork that acted like a second description, which was really important due to the many details and side effects of each card.

GOPaws follows the same design with a bit more focus on storytelling. There is a recurring good guy and bad guy(s) that appear together in most of the art. This lets the player know how each card affects everyone on the battlefield. All the art was done by a contractor. The process was very simple. We agreed beforehand on the design of the 2 recurring characters and I wrote about 200 scenarios that he would illustrate. Example scenarios could be...

MMBN had a really weird Tetris-like upgrade system where you would fit blocks into a grid and each block would activate an upgrade like more health, more damage etc. It was a fun system but not the essence of the game. Rather it was a way to limit how many upgrades the player could have activated at any given moment.

In GOPaws, you choose 1 out of 3 upgrades per world and they are always active. This works better for a Roguelike where you are constantly resetting your progress. 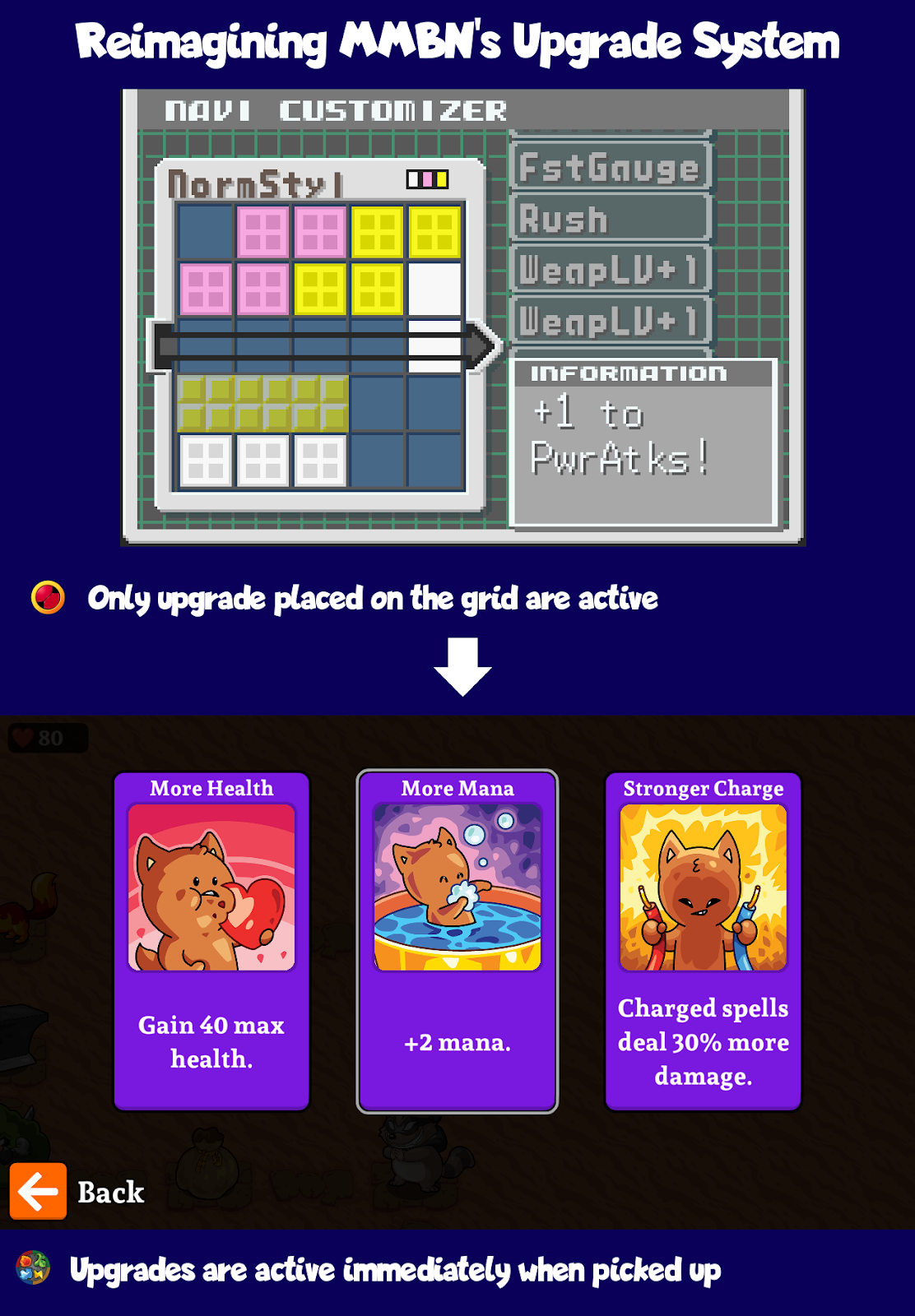 MMBN forced you into battle with random enemies at intervals when running around the overworld. This has some problems that are listed below together with a description of how the problem has been solved in GOPaws.

Solution 2 and 3 work really well together. Only 1 enemy will attack at any time, but they are all dangerous, so battle won’t get easier as enemies are defeated. 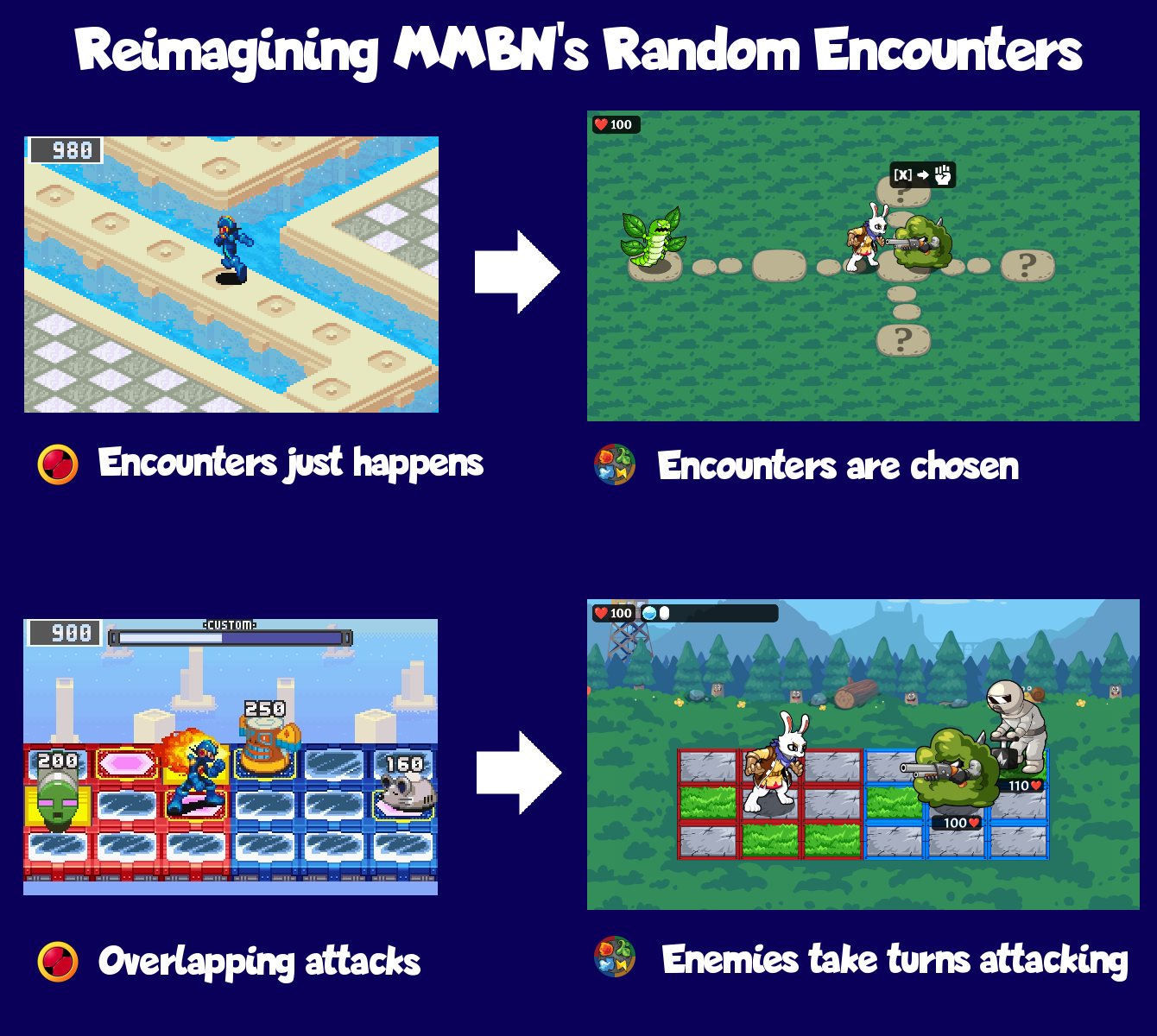 MMBN had a lot of cards with varying complexity. Some were really obscure and required Sherlock Holmes levels of IQ to understand. This is due to the extremely limited 4-6 word card descriptions and sometimes complicated combinations of triggers and effects that were never explained. A regular card in MMBN wouldn’t just deal X damage to an enemy. It would summon a bullet, but without letting the player know how it moves, where it starts from and how it behaves when hitting the enemy.

In MMBN; you could charge certain cards under certain conditions. In GOPaws you can charge any card at any time, but the player is unable to move while doing so, adding an element of risk versus reward that must be considered at all times. A great way to instantly make combat a lot more interesting! 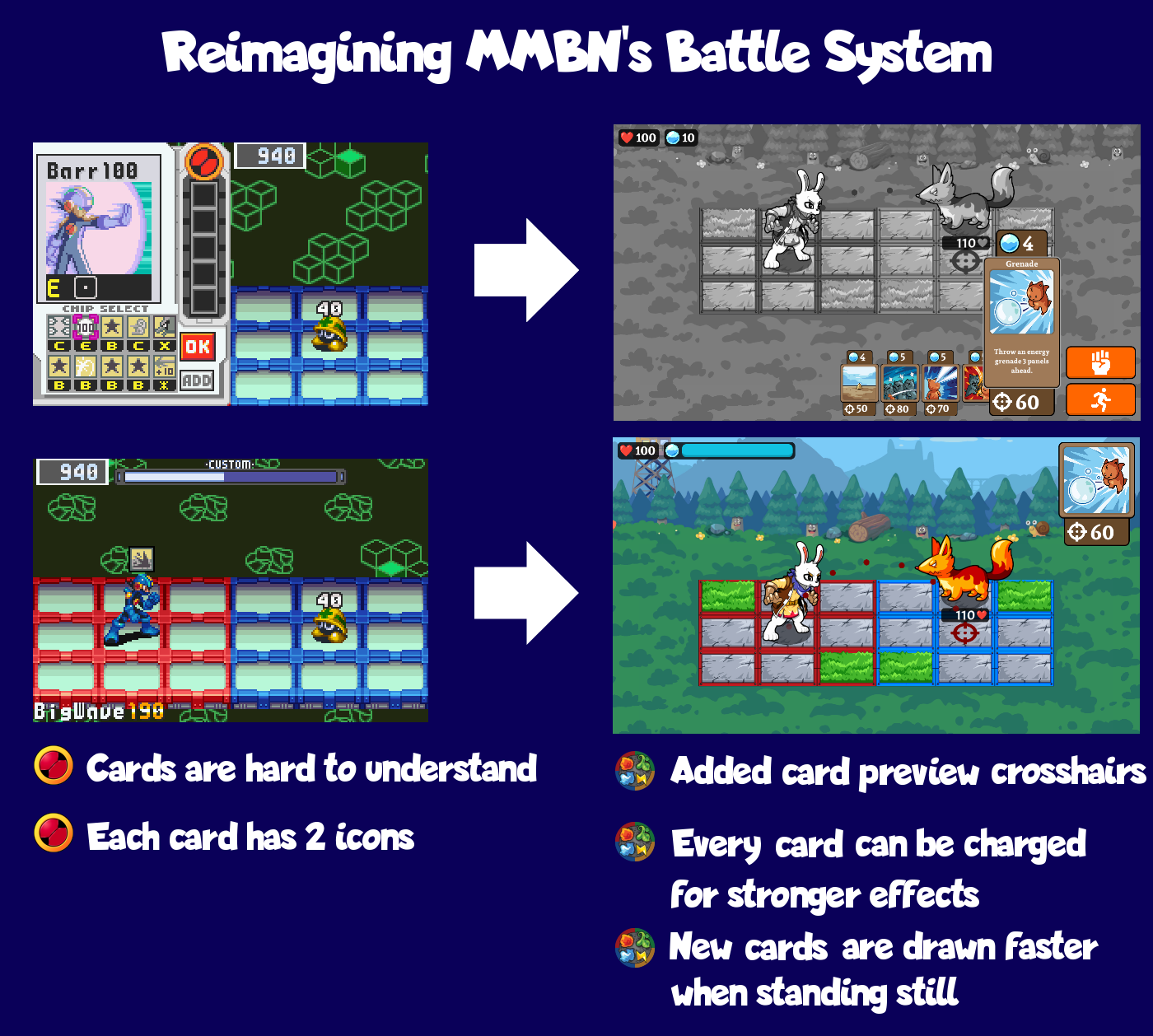 Boss battles in MMBN were the best! They were so great that the challenge for GOPaws was to come up with new ones, without borrowing too many ideas.  Boss battles have to feel more grand, challenging and different from regular enemies. My method for designing new bosses was:

Here is an example. For the Sand Master, the gimmick is to make clones. His gimmick consists of two attacks:

Because all the Sand Children are independent of Sand Master’s other attacks, he must be designed in a way so he won’t unfairly lock the player on a single row. 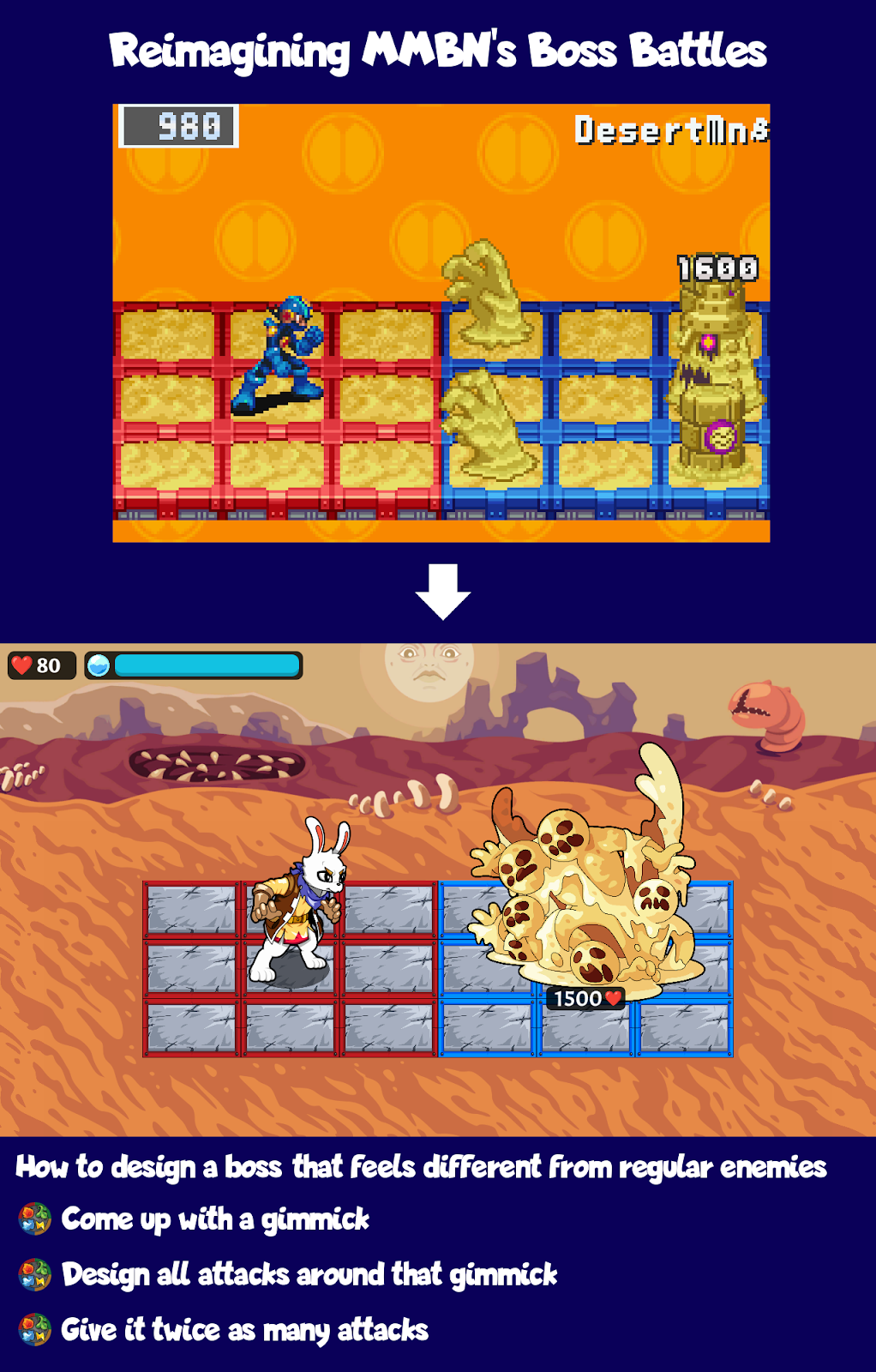 My opinion is that MMBN always had fairly good final bosses. They only had slightly more attacks as regular bosses. But they certainly looked and felt like real final bosses. Why? Because they were BIG! The final Boss always took up 9 times more space than any other boss. They also had cargo loads of more health that could actually survive the 1-turn-kill combos the player could consistently pull off.

For GOPaws, the final boss is also very big, very healthy and has double the attack count of any other boss. There are no gimmicks and it is instead just a really straightforward hard battle. It allows the final boss to stand out from the other bosses. 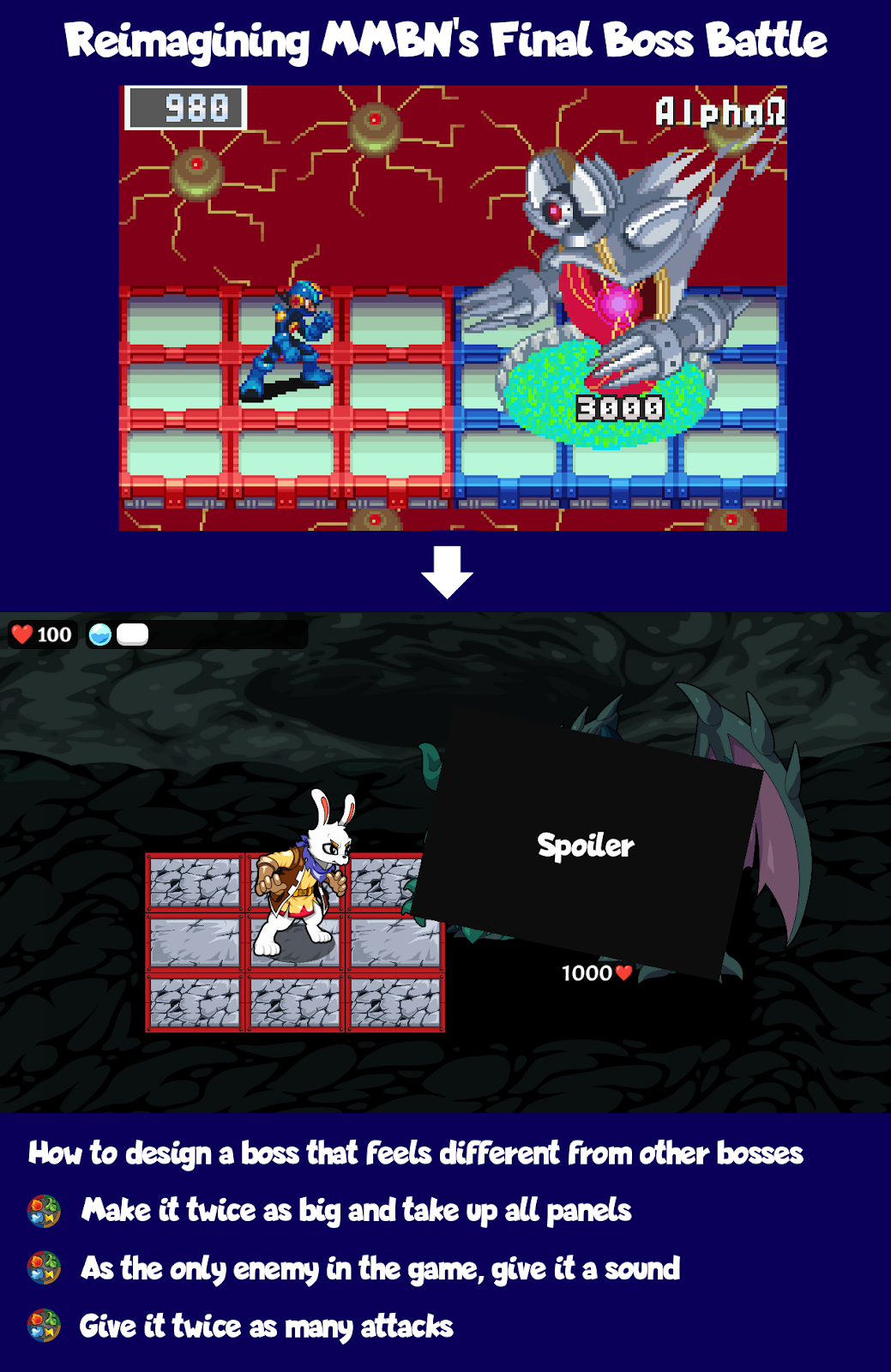 I have worked on GOPaws for many years. Mostly because the project was rebooted and reworked several times due to my own vanity. But I learned a few tricks that I would keep reusing.

If you are curious about GOPaws, then give the official website a look.
https://gopaws.arkuni.com/