Political extremism and gunplay meet in The Church in the Darkness

We desperately need games that analyze political extremism in all its forms. One of the greatest flaws of Dontnod's Remember Me is that it all but gave up on exploring the ethics of Nillin's radical acts, which included flooding a whole district of Neo-Paris. Do the ends justify the means? Is a real revolution possible without violence? Remember Me just shrugs and deluges the player with pretty graphics, in the end.

Enter Paranoid Productions' The Church in the Darkness, an upcoming game that critically explores the leftist underpinnings of a social justice-oriented congregation turned reclusive cult: the Collective Justice Mission.

You play the aunt/uncle of a young man who's gone to the South American jungle to join the Mission. Gun in hand, your objective is to infiltrate the compound, find out what's really going on, and get your nephew out of there.

The Jonestown parallels are obvious, and there's an interesting continuity that links the game's Summer of Love leftism to contemporary forms of radical politics. As you wander the compound, sermons about the power of love and bromides against American imperialism in favor of our "brothers and sisters in North Vietnam" rise above the endless burr of jungle cicadas. The voices of Rebecca and Isaac Walker, the couple that runs the cult, sound out over the loudspeakers preaching something like liberation theology. I had to smirk when Rebecca Walker, one of the cult's leaders, seethed at Boston's failure as a "shining city on a hill" that was now home to "fake progressives"; now there's a timeless complaint.

"We desperately need games that analyze political extremism in all its forms."

How can these ideas turn to madness and lead people into the totalizing world of a potentially violent cult, however? That's worth exploring. On the strength of Paranoid Productions' PAX West demo I can't quite say whether they succeed or not, but the signs are hopeful.

The core idea of Church goes a long way to expressing the nature of political possibility: each new game loads up a different version of the cult. Some variants are peaceful communards, others live up to the game's Jonestown inspiration. You have to discover the truth. This is beautifully reflected in subtle ways: the tone of the speeches, the newspaper clippings, letters, and notes you uncover. Even the voice acting for Isaac Walker, who you can meet in the demo, changes quite markedly in different playthroughs.

The Mission contains many equally plausible truths, then. In that there's a notable lesson, expressed with ludic elegance here: staunch opposition to the status quo needn't always become violent extremism.

It remains to be seen whether the game will address other even thornier issues. The radical racial politics of the 1960s and 70s; relations with the locals in this fictional South American country, including its indigenous people; the sometimes toxic gender dynamics that prevailed in leftist communes. If not, its vision will only be a superficial one that steers dangerously close to using politics as window dressing. But on the strength of the demo, it does do important work nevertheless.

The bigger problems with the game arise from its controls.

Your infiltration of Freedom Town sees you start with a pistol in hand. That sets a tone almost immediately. Your first challenge is to get into the village by subduing a guard. You have a variety of tools at your disposal, including tranquilizer darts and chloroform. You can subdue people without killing them, in short, and each encounter constitutes a de facto choice between subtlety and just Rambo-ing anyone who stands in your way. 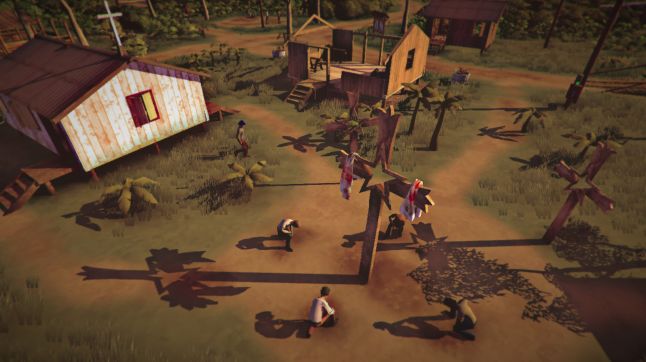 There's nothing wrong with this, of course, even if shooter/stealth games are nothing new under the sun. The larger issue, however, is the same one that's long afflicted MMO The Secret World: the ambitions of the game's stealth mechanic are far beyond the grasp of its controls.

Church's controls make for a struggle throughout its otherwise beautifully-detailed map. It can be maddening to try to navigate properly around guards sensitively with the WASD keys; hand-to-hand combat, which requires precise positioning, is frustrating.

The result is that the game all but twists your arm into treating it as a fourth-person shooter, the controls for which are only marginally better. It's too tempting to just give up and start shooting everyone, which feels like an especially videogamey inversion of the Jonestown scenario the game so obviously invokes.

Limited ammo and different gun-types make this, potentially, quite interesting in mechanical terms, but even this is overwhelmed by loose controls that are entirely at odds with the precision demanded by the mechanics.

The troubling part is that this is clearly a dramatic deviation from the intentions of the developers, whose excellent writing portends a nuanced story that should reward exploration and problem-solving. For now, however, the controls are barbed-wire blocking the way.

This is a game layered with meaning; it's not meant to be a straight forward shoot-em-up where one switches off her brain for good old fashioned Doom-y fun. Its encounters are clearly designed as equations to be solved. The issue is that it's almost impossible to do so elegantly, even at the lowest difficulty level. I reached the end of the demo by mastering the use of rock-throwing to distract guards and townspeople (few of whom you can talk to, most of whom just summon guards with ever bigger guns).

But even if the controls were more supple, it raises a larger issue with the game's identity. It's marketed as having "tight top-down infiltration gameplay" but one wonders if Paranoid did enough to make other options appealing; you can talk to certain cult members, but they're few and far between.

On the one hand there's an element of realism to this. You're a stranger in a compound that's in the middle of the jungle to isolate and guard itself against the outside world. Why would they welcome you openly? On the other hand, it feels like a missed opportunity to make the choice to kill much more meaningful. If there were a conceit that ensured the cult was not violent with you as a first resort (perhaps that could be a variable that changes depending on your playthrough?) it might open more ways to explore by talking to the cultists. As it is, shooting everyone feels instead like a default posture that is at odds with the game's theme of exploration.

The choice to be the one who kills the cult could be quite powerful and beautifully dark; there should be more underlying it than a default gun and loose controls.

All this aside, I still have high hopes for this title; if its political themes are more than just gloss, the game has the potential be a landmark in the indie space. We've sorely needed a game about where revolutions fray and fail, a game tackling the thorny ethical questions that separate goals from methods, ends from means. If it gets lost in a haze of desperate gunfire, more's the pity.

Katherine Cross is a Ph.D student at the University of Washington who researches anti-social behavior online, and a gaming critic whose work has appeared in numerous publications.