PICO-8 is a fantasy console to make, share and play tiny games and other computer programs. PICO-8 Zine is a 48-page fanzine made by and for PICO-8 users. Learn how to make a game (from the code, sprite, music point of view).
Arnaud DE BOCK
Blogger
October 05, 2015

The first Pico-Zine was an incredible, unexpected success.

People from all over the world downloaded the PDF and I have had to repeatedly flood my local mailing office with hundreds of paper copies. This is an amazing achievement for the Pico-8 community, both the newcomers and those who shared their knowledge and code. 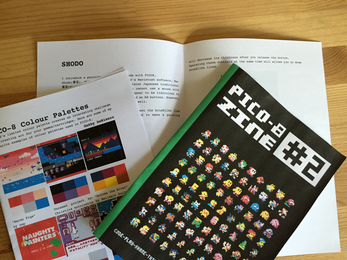 In Pico-8, there is no real reason to make a distinction between the player, the consumer and the maker. If you can play, you can also make: the source and assets are always a single image you can share and change as much as you want to.

Through its well-thought-out constraints and limits, Pico-8 breaks a lot of frontiers, and that is what is amazing about it. It’s a tool to make games in the largest and most inclusive way possible.

You know what? I have never been very knowledgeable about coding. I messed around with BASIC when I was younger, but since then code has lost most of its appeal to me, it became obfuscated, complicated and not-so-logical. From an outsider’s point of view, code is very similar to magic. It’s an arcane formulae rendering the most amazing interactions and stories. It’s necessarily encrypted, protected and out of reach. It’s the sacred language of an illuminated cast, the developers. 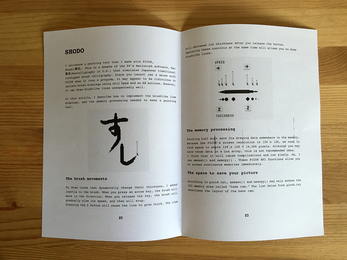 Pico-8 has broken that feeling. For the first time, I have had this amazing ability to “follow the trail” of code, directly and instantaneously. For example, I am able to look at a piece of code made by a well-known developer and change the way a character jumps.

Compared to other game engines, Pico-8 has a very specific philosophy: it’s a “Fantasy console” and a walking utopia of making. This is because of two features :  it’s an all-in-one swiss army knife style of game-making (everything is done within the space of the engine, no plug-in, no dependencies) and it’s an extremely shareable format (if you can make you can share). This means that Pico-8 is the best tool to build an open community around a shared knowledge of making for the sake of making.

you can download the fanzine for free on Itchio :

or order the paper version here :