I wanted this article to be about Carteret’s story but she was unexpectedly felled by the Old Hag in the forest before I had a chance to put pen to paper. I’d had an idea to write a condensed diary of her evolution over the course of a few weeks of play as a mercenary Hellion (a kind of barbarian-berserker class) in my employ, trading blood for my family’s lost treasure. Instead, I’m left with something of a eulogy for her, a Darkest Dungeon character that I’m going to miss dearly.

Why did I care about her, though?

One of the great challenges of video game development, surely, is being asked to make meaning for a living; all artwork colludes in this profoundly human enterprise and games are no different, perhaps even special for how they depend on the engagement of a player to release the latent contextual meaning that sits inert in most games.

“Meaning” is the line between a game being a memorable cult classic and forgotten in a bargain bin; imbuing games with a sense of significance beyond inputs and responses, something that connects with you emotionally as well as logically. Meaning is what ensured Sid Meier’s Alpha Centauri would be remembered as something more than a competent 4X game, but as a philosophical classic that arched towards the profundity of a Hugo Award winning sci-fi novel. 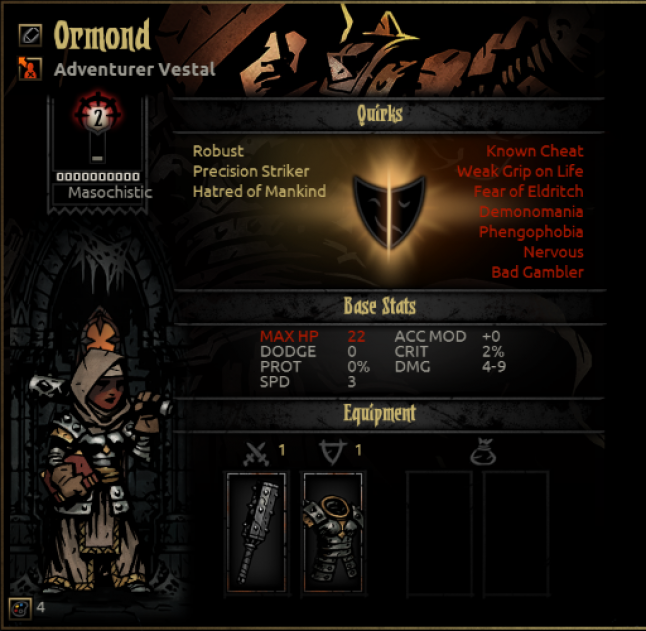 Meaning is sticky; it shapes our consciousness and stays with us. It not only makes sense of the world but also lends it a spectral kind of significance. When it comes to a video game, making a game meaningful means giving the player an experience that effortlessly pulls them into the game world, suspends disbelief, and gives them a sense of experiencing something above and beyond the mere mechanics of achieving objectives or winning.

Often the “easiest” way to imbue a game with meaning that makes it memorable is to simply give it a well written narrative or, failing that, to use good writing in other ways as flavor text sprinkled throughout the game, or through creative use of errata like instruction manuals, as I recently suggested. Narrative is undoubtedly important, but not every game needs or should have a clearly spelled out story; not every game should have an RPG’s worth of text and lore.

There are other ways to make games meaningful and Red Hook Studios’ Darkest Dungeon illustrates this beautifully.

Darkest Dungeon is essentially a roguelike and primarily centers around organizing parties of adventurers to go through procedurally generated dungeons, recovering loot and gaining XP to level up. Simple and boring enough, except what sets it apart is its emphasis on exploring what D&D-style dungeon delving can actually do to a person. It takes a toll, surely, that cannot be measured in HP alone. It can psychically scar you, it can change you as a person—for better or worse—and it will all have an effect both on how you fight and how you recover from the rigours of battle.

The genius of the game lies here, but even more so in how it uses this witches’ brew of elements to make a meaningful game that has very little in the way of dialogue and only the broadest adumbrations of a story, about your family as you slowly unlock it over the course of the game. Darkest Dungeon is deliberately high stakes. It auto saves constantly, robbing you of the ability to save-and-reload to either experiment or save a fallen party member if things go pear-shaped. Once you commit to an action, there’s no turning back. But the inevitable deaths of party members are given serious bite because they emerge as people.

Austin Walker wrote on the matter brilliantly, describing the mercenaries you assemble as “burnt torches,” spent by the ambition that the game forces you to mercilessly enact as their patron. It’s part of the deliberately gloomy, low fantasy atmosphere that the developers sought to create, but how did this happen? 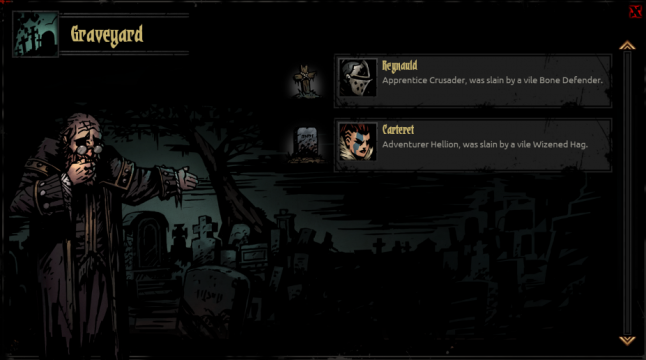 I would argue a significant factor here is how the various buffs and debuffs are applied to the characters in the eponymous dungeons. Good or bad, they’re known simply as “quirks” and placed on their character sheet (this has the happy side effect of not stigmatizing mental illnesses).

Their mechanical effects are myriad, ranging from impacting combat to affecting how they recuperate in the Gothic town that comprises their home base. But they also string together like beads on an ever-lengthening necklace to tell a silent story.

Carteret fell in love with someone in town, a woman who worked at the local brothel; this gave a “debuff” that prevented her from recuperating anywhere else in town, but I hardly complained. She deserved someone to get close to, I thought, after everything I put her through. It made her death that much more regrettable, the first time I well and truly cursed Darkest Dungeon’s autosaves.

She had also become a masochist over the course of her adventures. It gave her a debuff to blocking incoming attacks, but also put a smile of recognition on my face as I wondered just what transpired between her and her girlfriend in town.

Meanwhile, my cleric Ormond, was occasionally driven to supersede my commands when it came to the dangerous task of inspecting dead bodies, treasure chests, or opening doors. She was wont to be seized by divine purpose to be the one to take these risks; perhaps it was her way of dealing with the terrors of these dungeons, a way for her to take back control in this challenging environment.

Obviously I’m filling in details, making up stories and tales to fill in the blanks left behind by the mechanics; but that’s all to the good. That the game encourages me to do this and facilitates this form of emotional connection with people who would otherwise be interchangeable members of standard RPG classes is something of an unpretentious triumph. It makes meaning with an utter economy of words and lore.

The Quirk system alone creates characters worthy of the name and lends their lives and deaths an impact they wouldn’t have otherwise, which then feeds back into the primary themes of the game: darkness and fatalism. There could be no melancholy to the drear without these characters to make you feel for them.

To give into the powergaming, min-maxing instinct, which demands you fully instrumentalize these characters, is something that can’t be done without provoking at least some thought, some recognition of a person’s story beneath all the stats.

Of Carteret it’d be both cliche and true to say she died as she lived, flying into a rage of furious combat aided by her recently-upgraded spear. Her woad-smeared face will be quickly replaced by the next Hellion I add to my party (all members of each class look identical), but there will be no one with quite her strange and fascinating combination of Quirks. Little story beads round her neck that made her who she was, which made the game fun and memorable both.

There’s an elegant efficiency to this.

I should point out that I’m a partisan for writing in video games; it’s a profession that deserves to be given more respect, power, and freedom than the triple-A industry currently imparts, to be quite certain. This lack of freedom leads to a myriad of knock-on problems, from difficult workplace conditions, to poor writing, to the endless cloning of stereotypes and safe bets. Worlds like Darkest Dungeon’s begin from an inventive literary imagination, even if it “only” speaks through artwork and the ludic matter of the game itself.

Writing of some sort remains a precious skill in this industry. But as I said, it’s equally true that not every game requires in-game narrative, as such. The worldbuilding inventions of writers and creative teams can effloresce in other ways.

Darkest Dungeon is, at heart, a relatively simple RPG that focuses on dungeon diving combat, it doesn’t necessarily require a story. But the puzzle of meaning was one Red Hook nevertheless took seriously, creating interesting characters who are the product of your adventures with them. The Quirk mechanic is a clear and beautiful demonstration, a lesson, even, of how lavish meaning can even arise from voiceless buff/debuff mechanics.