The 1CC means something different to each person. Some scoff in jest while others dedicate a lifetime. I'm somewhere in between.
Michael Molinari
Blogger
May 10, 2010 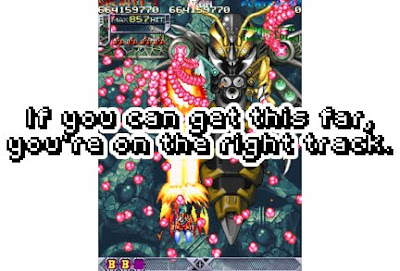 Within the circles of those who continually test their mettle against the forces of constantly scrolling antagonistic affiliates (relatively speaking), there at one point or another comes into discussion a mention of the one credit completion, the 1CC, the accomplishment for which there is no reward other than the drive to keep pushing forward to gain another (conditions permitting). The 1CC is the friend of the challenge-seeker, the foe of the casualite, and a distant cousin of the credits screen.

I've mentioned this little thing before, but for those who enjoy caressing their eyes over its description, a one credit completion, in shmups, is the art of playing an entire game from start to finish without ever losing all lives, thereby not using any continues. Yummy. It gets a bit more complicated when you break down how to accomplish this in any given shmup, but the general strategy is the same: Get a lot of points, earn a lot of lives, abuse systems to maintain a possibility of survival, and fail... over and over.

Failure Is Only An Option At First

There are of course variations to the methods for gaining such a title, which include playing for survival (dodge everything), or using tool-assisted software (a demonstration of a different caliber altogether). The real treat that we've all come to see is to witness a human putting his all into one joystick, a set of buttons, and doing what countless others before him could only hope to accomplish.

The issue I have with the lore surrounding this skill is the slew of misconceptions surrounding its existence. I've read many attempts to cleanse the reputation of the 1CC and its achievers. They all do a good job of clearing up some air, but it's hard to convince someone from the other side that something once thought to be a waste of time is actually something worth fighting for. Opinions are just opinions I suppose.

There are people out there who buy/try a shmup, play it in its entirety one time, credit-feed the countdown whenever necessary (sometimes dozens of times by the final levels), beat it, and walk away with a cheap sense of thrills from various arrays of bullets and boss designs, never desiring to understand what greater accomplishment lies just beneath the surface. Something was lost along the way.

The 1CC and Me

What's my personal drive for attaining the 1CC? Pulling off a 1CC means that I fully understood the rules by which a game is bound. It means I have control over what was designed to be impossible at first glace. It means I overcame the obstacles that stopped me countless times before. It means I understood something fully and could actually perform the necessary skills when the time came for it.

Is this not the same feeling that people get when they build a car from scratch by themselves? The same feeling of building a house from the ground up? The same feeling of winning the final round of Hold Em on national television? All of these people worked hard to get where they got. They learned from their mistakes, from others like them, pushed passed the point where others gave up, and went the distance.

Other kinds of people would have just given the car-in-progress to a mechanic, or the second floor's completion to a group of construction workers. A shmupper would have pressed start to continue. There's nothing wrong with this. The car gets to drive; the house gets to be lived in. But what do you tell the kids to teach them about motivation, personal drive, and self-worth?

Okay, those may be a bit dramatic, but the ideals behind these accomplishments are the same. People want to do things entirely on their own, without the help of a continue option, to prove to the world that they are not spineless drones to challenges that give up and never try again.

Never gaining a 1CC is fine, too. It's even okay to stop trying on one particular game. The point is that you should always be pushing yourself to learn, to grow, to gain something from your experiences that you can take with you. Sure, you could live in that house that you built, but you could also take what you've learned from 1CCing a shmup and apply it to managing your personal business more efficiently, to driving on the highway both more efficiently and safely, or to composing that concerto the world's been waiting for (the one that looks easy, is difficult to play, is fun to listen to, and takes generations for people to dissect and fully appreciate).

I know there are various Achievements and Trophies given out for 1CCing a game, but those aren't worthy of representing the blood, sweat, and blisters associated with going those extra 100 miles. The real reward comes from within. It can't even be shared with friends who don't know about its roots without sounding like a cheap brag. Those friends need to experience it for themselves, and I don't mean having them only play one credit to see how challenging the game really is. They need to experience the thrill of gaining a title few in the world have ever held in their hands.

Everyone needs to 1CC something in their life.

Take this guy for example. He beat Super Mario Bros. by playing on a dance pad. Granted, it took only a week of practice, but he has a sense of accomplishment that no one else in the world can feel. The best part of all is that his joy is shared in raw form on camera, especially during the final level where we hear his yearning to touch that axe and solidify his journey to that point. And what does he do after the credits? He asks the community what game he should beat on a dance pad next.

He's taking what he gained, what he earned from pushing himself to achieve this goal, and applying it to something new. Personally, I think he just enjoys the thrill of that final moment, where it all comes together and he knows that he pulled off what he set out to do.

On the subject of shmups, it's fun to know that there are people on the other side of the spectrum that are not satisfied with the 1CC alone. They yearn for an even greater accomplishment: to both 1CC a game and to hold the highest score in the world for said game. Granted, a higher score implies more bonus lives which in turn implies an "easier" time 1CCing a game, but the added dangers and challenges of going for those higher scores is more than enough to warrant the quest for such an endeavor.

My point is, the 1CC is not a worthless art and a sign of someone having no life. Everybody does something in this world. Everybody is striving for something. However, not everyone will be able to continue after having failed. It's those that can push themselves to their limits and keep moving forward that are deserving of what they've earned. Some of those people play shmups. But this way of thinking goes for anyone and everyone.

I respect anyone who doesn't give up, and I look up to anyone who can get up after having fallen down. Whether or not any of them are trying to 1CC is irrelevant. I just wanted to let some open minds understand why the 1CC is not a goal exclusively for the elite; it's a waypoint for anyone desiring better things, a stronger being, and something onto which to grasp in order to find value and meaning in this chaotic world.

You and I both know it would be tough to have a dedicated post to the 1CC and not end with a video of courage and strength. Below is part 1 of an 8 part video of someone recently 1CCing Gradius III on Very Difficult mode. This game is one of the hardest of them all to 1CC, especially on the highest difficulty. Has it been done before? Yeah. Has it been recorded before? Probably. Does this guy feel any less accomplished? Will he continue pushing himself to accomplish great things in life? I think actions here speak louder than words.

Additional Links:
- The 1CCers of the Shmups Forum
- Shmups Forum discussion on how to practice shmups
- SuperPlay! A database of videos of people being really good at shmups.