Novice Ultra Mode: An Oxymoron For Us All

Have you ever felt like a novice at something, but wanted to be an ultra player? I think I might have a temporary solution for you (until you upgrade from novice and are on your own).
Michael Molinari
Blogger
March 12, 2010 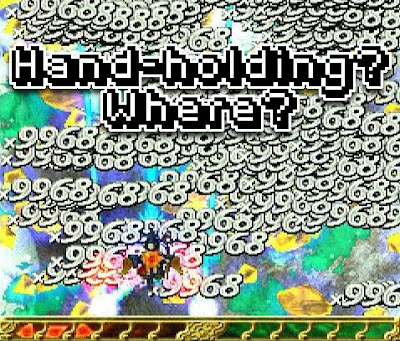 Too Easy, Or Too Fun?
It's a well-established notion nowadays that the shmup - particularly the vertically-scrolling danmaku shooter from overseas - is a genre of gaming best reserved for those with determined hearts and as many quarters as they have reasons not to go easy on themselves. With that in mind, it's a breath of fresh air to see that Cave, the head honcho in professional modern shmup releases, has introduced a Novice difficulty into their home port of (deep breath here) Mushihimesama Futari 1.5. For a game that's popular on YouTube based solely upon its difficulty, it's wonderful to learn that the developer didn't want to shy away those who would otherwise use this game's existence as a reason to stick to their Mario RPGs (don't hate) and actually have a chance at completing a game. But then they made an Ultra version of Novice mode. Yes, this is where it gets fun.
Novice Original mode by itself is the tamest out of... thirteen possible modes there are in the game. It features very few slow-moving bullets and plenty of ways to milk your lives out. Auto-bomb is included here, granting you another chance to live in exchange for one bomb. This is a step up from Ketsui for DS, which would clear your entire bomb stock upon being poked by a pink dot. Take into account that the beginning of each boss will net you a bonus two bombs and you effectively have dozens of lives at your disposal (and no need to even hover over the bomb button).

Don't be fooled, though. The tweaked mechanics of the game don't hold your hand the entire way. If someone is playing a Novice mode, it's likely that he or she feels that it's the appropriate difficulty at which to play. Novice Original is great for people to get into the jive of playing a bullet hell shooter altogether. For those who have some shred of confidence, but not enough to be on bomb duty the entire time, Novice Ultra is the way to go (I am ignoring Novice Maniac, the in-betweener, as it's pretty much the average between my two points of interest).

Novice Ultra also spews few bullets at the player, also at a slow pace, but these comparisons are in relation to the original arcade release, found elsewhere on the disc. There's plenty of bullet weaving to be had, and even less hand-holding present (perhaps only a few fingers are gripped at this point).

Suddenly You're Amazing
The thing that makes this mode so thrilling is the illusion of you being awesome. The developer went through a lot of trouble to revise every single bullet pattern to create immediate dotted chaos on the screen, only to have it fall into a recognizable pattern with wide gaps for escape. There are very few moments of overlapping patterns, some of which come from the same enemy, effectively keeping your focus at maximum (and your sweat glands dry). On top of this, larger enemies' bullets disappear upon destruction, giving you a break just before your eyes dilate to their maximum. Once you get used to this little feature, you'll quickly go from Marty to Doc in expecting immediate danger to just disappear.

Just to prove how helpful this mode is, I 1CC'd Novice Ultra on my second try, having gotten to the final form of the final boss my first try. And the best part of all? It was a complete joy to play through from beginning to epic end. Though I didn't have too much difficulty lasting the entirety of the game, I had my mind gears churning out some finely-tuned calculations. This accomplishment is one of my two legitimate 1CCs, the other being a full 2nd loop clear in Star Prince in Retro Game Challenge (that counts, right?). 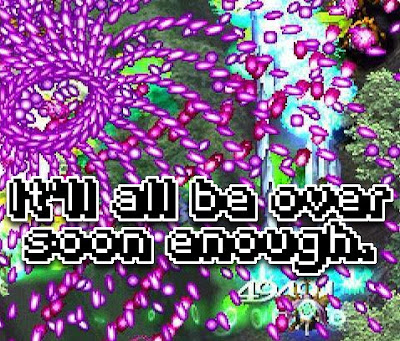 This Is Not A Review
So, the real question is, "Does Novice Mode really allow beginners/novices to get into the shmup club?" The short answer is yes. The long answer is no (I know, that's actually one letter shorter). It's definitely a step in the right direction, but I'm sure more can be done to help out those who aren't accustomed to bullet herding, max chaining, multiplier maximization, etc. Just what those things are, I am uncertain. I guess we'll just have to wait and see what evolutions of an old genre will pop up in the future.

I tried to keep this post away from becoming a review, but in all honesty, this is a fantastic port of the original. And the fact that it's region-free means that anyone with an NTSC Xbox360 can join in on the fun... for about 70 smackers. If you're interested in learning more about the game, BulletMagnet from Dtoid has a ridiculously detailed article covering every single aspect of the game.

Below is part 1 of a 4-part run in Novice Ultra. The rest can be found from related videos, but I suggest you discover the rest of the game with your own two thumbs.