On the heels of releasing my own 2D fighting game on the Xbox One, I discuss what has changed in the genre over time, and why it may not be for me as much as I used to believe.
Matthew DeLucas
Blogger
November 16, 2015

For years I feel like I could say "I love fighting games" with confidence, but lately, I'm not so sure.  Ever since I attended EVO in 2014, I've been having this feeling that maybe the genre that influenced me so heavily, that made me want to get into the game industry, isn't quite what I thought it was or maybe it has changed into something I no longer find attractive.  Another thought is that maybe I've been playing them the wrong way or with the wrong goals this entire time; however, saying that someone is playing a game "incorrectly" is audacious.  You could argue that most Smash players aren't playing the game the way it was designed or originally intended -- but that would be blasphemous.

Before I start, I want to write a quick disclaimer that these are just my opinions and reasons that I personally don't get as much enjoyment out of the genre that I used to.  This is not me dooming the genre or up-and-coming games like Street Fighter 5.  Instead, it's a slight explanation as to how I approach the genre from a design perspective, albeit it is rather atypical.

Now, the items I listed are actually all extremely unimportant to what a fighting game actually is and probably needs to be.  I know this, but I feel like there was a time when fighting games at least attempted these features; however and again, I feel like they no longer do because they don't have to.

So before "good" online multiplayer was possible, I felt a lot of fighting games, at least more prominent ones, had a lot of extra modes.  Soul Blade's Edge Master Mode comes to mind.  The problem now is that a lot of games usually do substandard jobs with this.  There's arcade, training, a few challenge combos and survival maybe, and that's about it.  If you weren't very social or didn't have opportunities to be social, you were stuck playing the CPU a lot.  To me, at the time, this was fine, especially with modes like EMM that created variety.  I feel modern fighters offer so little that eventually going through arcade with each character feels like a chore, especially with the reward -- which I'll go into later.

When online multiplayer became possible on consoles, I appreciated that some games such as Tekken 6 and Mortal Kombat 9 provided fun and unique single-player experiences but noticed that some games like Street Fighter and Soul Calibur were sorely lacking.  And when I first played online modes -- I want to say Dead or Alive 4 was the first game I played online -- I had fun for a bit, but frustration started to take hold from losing so often that I no longer was having fun and I had to ask myself, "Why am I doing this?"  Someone made the analogy to me that it's about the fight not the fight results, similar to the concept that it's about the journey not the destination, but I couldn't help to feel like I was just playing strangers and had no destination in mind.  I wasn't really improving or enjoying myself.  It felt more like wandering aimlessly than enjoying the journey.

Now you could simply shout, "Well get better!" or "Train harder!" but at my age -- I'm "old" in the eyes of many fighting game fans -- and with the number of games out there, it's just like "Why?  Why keep playing this game I'm not enjoying anymore when I could easily pick up something new in minutes?"

Recently, newer games are showing they are going to have a heavy emphasis on this; Street Fighter 5 and Rising Thunder come in mind particularly.  And you know what?  This is fine.  This is what the audience wants; it's the closest thing people have to the days of the arcade, but you know what?  It still isn't the same as playing in the arcade -- though I'm curious if anyone will make a VR port of Street Fighter 2 where you stand next to an arcade machine and your opponent is next to you in the VR environment.  I think my attitude would maybe be a little bit different if I wasn't a game developer and/or there was a strong fighting game scene in Pittsburgh.  I mention game development because a lot of my free time is spent developing my own games so even if there was a scene, I doubt I'd be able to dedicate a lot of time to it.  I will say, however, that the most enjoyable moments I've had playing fighting games have been playing with people in person, especially friends -- unless I or they hate the game cause then everyone is miserable.

I guess, going back to my design choices comments, because I'm not huge into online multiplayer, I ultimately decided to not include it in Battle High 2 A+.  Okay, the main reason is I have nearly zero online multiplayer experience, but if I really wanted online multiplayer, like CRAVED it, I would have probably either done it myself or sought the resources to do so and been researching how to do it from day one, which I didn't because doing so didn't really interest me.

Weak Narrative and Even Weaker Delivery of Said Narratives

I don't want to criticize the narratives of fighting games too much, because I know that Battle High 2 A+'s isn't the strongest, but lately most fighting games narratives just don't feel that compelling, and when they are, they are poorly delivered.

BlazBlue comes to mind mostly.  BlazBlue has an interesting story -- I won't say it's good or bad -- but it's delivery was PAINFUL to get through.  Having to lose every battle in Story Mode in Calamity Trigger was bad, but then the 20 minute "cutscenes" in Chrono whatever the hell were even worse.  Narrative moments can help give the players of action-heavy games a break; however, I feel they have to be proportional to the content they are intersecting, and BlazBlue just failed at this.  Actually, this is why I didn't player Persona Arena, as I heard it has from similar issues, that and it's an ArkSys game which I always want to like, they look so good, but I just suck at them, but I digress.

Again, Soul Edge and Soul Calibur did a great job with their stories.  Each character has an ending, but also longer bios that you could choose to read when unlocked.  The narrative still isn't tied into the gameplay well though.  And Street Fighter's endings and unique intro scenes are interesting, but the fact you can't rewatch them is a bit frustrating.  I know, from an engineering perspective, it's a minor feature that was probably the first to get cut, but from the animation perspective, it probably sucks knowing these won't be viewable -- at least in game.  Thank, YouTube!

One game that I felt attempted to do this interestingly -- maybe not successfully -- was Battle Fantasia, another ArkSys game I sucked at!  They had special battles in one mode where you have to perform a unique task to affect the story's outcome.  Some were silly like throw the opponent six times, and they didn't always result in the biggest reward, but I liked the attempt.  I would love a game that tied it even more into their gameplay. 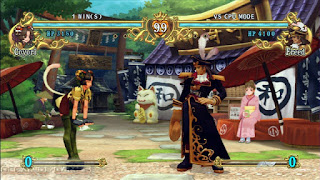 However, narrative doesn't matter realistically in the genre.  Sure, it helps breathe life into characters and probably would affect the popularity if omitted entirely, but knowledge of the narrative has no outcome on the fight and most games' fights aren't determined by unique actions such as performing six throws.  When I brought up narrative once, someone replied that the players in the competitive fighting game scenes create the narrative.  When I watch fighting games on Twitch, I find this interesting and sometimes exciting, but as someone who enjoys writing to a degree, it's a little depressing knowing that most of the will most likely be ignored.

Now when it comes to delivery, I at least attempted to do some of this with Battle High 2 A+.  There are bios, and players can watch the endings if they desire.  If I get the chance in a future update, I'd love to add a deeper story mode, one that maybe has some aspects of Battle Fantasia's story mode in it or in my next game, a deeper mode where what you do in battle actually matters more.

Lately, the most popular fighting games themes fall under a category I call 20XX.  It's kind of like now, but some technologies are more advance.  Tekken, Dead or Alive, King of Fighters, Street Fighter, Virtua Fighter, and probably more that I can't think of fall into this category.  It ends up making the thematic landscape of the genre just feel bland.  I feel a few years ago, theming was a lot more varied.  Samurai Showdown, Primal Rage, Star Gladiator, Darkstalkers, all games with unique themes but never really caught on or have fallen into obscurity.

Now, not every fighting game is like this.  I applaud games like SkullGirls, BlazBlue, Guilty Gear, and the fledgling CereBrawl for doing unique themes; however, theme, like narrative, doesn't really matter.  Well, it doesn't matter to the actual game itself, but I do feel that theme has a underlying, almost subconscious effect, on the popularity of a game series.  I feel that if f the theme is good, players will more likely be attracted to it initially -- like a book with a good cover.

A track from Cerebrawl.  I mean, that witch character looks so neat!

When I bring this up, my mind goes to Smash Brothers.  If Nintendo decided, "We don't want our characters beating each other up," and decided to make a 100% original IP for Smash Brothers, would it be as popular as it is?  It's impossible to prove either way, and you could argue that the lackluster popularity of similar games like Playstation All-Stars supports the argument that ultimately gameplay is important (or use it to say that nobody likes Playstation IPs that much).

As for my games, I definitely want to branch out in theme.  Admittedly, Battle High doesn't have the most unique theme; it has Rival School and Avatar:  The Last Airbender influences, and you could argue it's borderline 20XX.  Regardless, I definitely want to try and stray away from that in my future ideas, whether it's a fighting game or not.