Since the beginning of console gaming, JRPGs have relied on a storytelling formula that takes the minimum amount of work by developers to create lengthy, complex stories that maximizes player's engagement. This is how they adapted narrative into gameplay.
Jorge Veloso
Blogger
November 17, 2014

There is a great difference in the creative process of a videogame that depends on the discipline of the project lead. We often see games conceived from the points of view of programmers, artists, producers, composers and game designers; and each of them provide a different perspective regarding the systems that will be implemented.

From all the disciplines involved in the production of videogames, it’s rare to see writers take the lead. This doesn’t mean there are few games created with the story in mind; it means that few game systems are developed from a writer’s perspective. This used to be the case in early console gaming in Japan, in the particular case of Final Fantasy.

In early Final Fantasy installments, production, art assets, music, dialogs, and mechanics were developed around the storyline, so in turn, storylines were written with production in mind, which led to the creation of a formula that, in addition to superb writing, brought the golden era of JRPGs.

Mutatio ex Fabula refers to “changes from the story”. It’s the process of adapting storytelling elements to interactive media. For this article, I will use it to differentiate plot twists as a narrative formula in non-interactive media from a videogame narrative dynamic.

By this definition, a plot twist is a non-interactive form of narrative, usually delivered or revealed, rather than explored. For example, the plot twists in Call of Duty: Black Ops, Bioshock and Metal Gear Solid are all one-way tickets: you will be told the same story, even if you enjoy experiencing the story now that you know the twist.

In Mutatio ex Fabula, on the other hand, plot twists serve as breaking points that change your dynamic in the game. They present you with a twist that changes one aspect within the game, and let you explore its consequences through its mechanics. The clever use of Mutatio ex Fabula is the secret behind the success of Final Fantasy games, and those who are fans can clearly see the decline of the franchise as they ceased to properly implement it.

In JRPGs, mechanics are often centered on battle strategy, character optimization and story advancement. Locations and maps are used as places where these mechanics take place, yet the mechanics themselves don’t apply to them(for example, the strength stat of a character does not mean he can move vases or barrels placed in the scene, unless it is part of a story advancement). Final Fantasy writers became well aware of this, and took the chance to weave storyline and mechanics together.

In Final Fantasy V, the story centers on a party following the antagonist through the world. About 1/3rd into the story, a plot twist reveals one of the party members, an amnesic old man, to be a king from another world where the antagonist was imprisoned before the beginning of the game, and then the party is thrown into this other world. As the player, you are being revealed a plot twist through the story, but now you get to experience this twist. You get to fight these new monsters, visit new kingdoms and otherwise explore every nook of this new dimension. When you finally go through this entire world, around 2/3rd into the game, you are now revealed that these 2 worlds used to be one, and were separated to seal the evil in the void within them. At this point, both world maps overlap, and again players are given the opportunity to fully explore this 3rd version of the world, with every town now available, new paths open because of the overlapping geography, and explore how this world reacts to what has happened to it. Townsfolk and other NPCs talk about how they’re dealing with this new world, as both NPCs and players are equally adapting to it. This is a fine example of Mutatio ex Fabula delivered through plot twists woven into gameplay. Other great examples of this are Final Fantasy VI, The legend of Zelda: Ocarina of Time, Chrono Trigger and the Mass Effect Trilogy. Chrono Trigger in particular made use of Mutatio ex Fabula with such frequency and finesse, that you could barely go to the same place twice without being revealed an aspect of it’s past, present or future that would change your perspective about it or your relationship with it.

Mutatio ex Fabula offers the chance to reuse previous assets, or change them to a minimum, in order to maximize the immersion and credibility of the game world. By delivering a well-crafted narrative, the very same place could be used to deliver countless different experiences, as only changing a couple of dialogs, or even 1 asset, is enough to see it with a whole different perspective with a well written context.

Recurring places with different contexts means a deeper exploration into the idiosyncrasy of their people. This makes even one-liner NPCs feel more alive, as even though they do not respond interactively to the player, they do seem to respond to the world they live in. This marks a deeper connection between the player and the game world.

It allows developers to write complex and lengthy stories without worrying about making enough assets/towns/characters to keep monotony at bay.

In order to properly pull off a Mutatio ex Fabula, there are a few rules to follow:

1.- Engage the player in each iteration of recurring places

If you are counting on different versions of the same place to engage the player, make sure the player gets to know the place before changing it, or else you risk the player passing through the first time, and not noticing the difference the second time. Final Fantasy IX thought of a great way to do this…

In Final Fantasy IX, one of the biggest areas is Lindblum Castle. In the game, they want the player to get familiarized with the whole area before destroying it and having the player explore its ruins. What they did was having, as part of the main quest, a hunting festival, where they would set loose monsters across the whole area and a contest between the player and NPCs for who hunts more monsters. This was a great way to motivate players to run through the 4 districts of the city, and they set the starting point for the player the district that would get most story attention across the game. 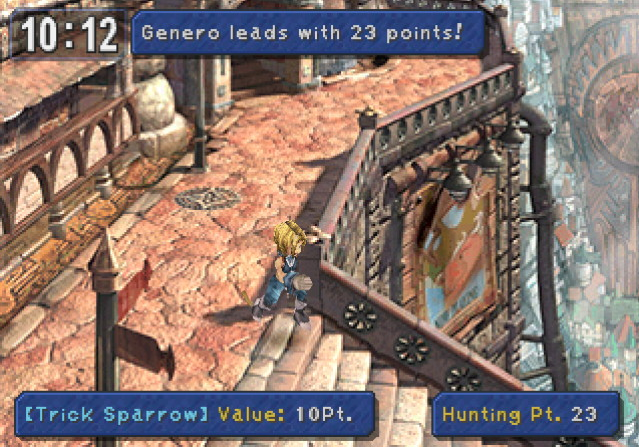 2.- Give equal attention to changes in every location

Immersion is sure to break if even one NPC seems unaffected by major changes in the world. The NPC may be unaware of current happenings, but they must still have at least a dialog or behavior depicting his unawareness. In this, it is better to have few locations that “twist” more times than many stale locations. If at any time in production, a certain location turns out too big to change or there is not enough time/resources to update it, it’s better to dispose of it in the storyline, and make every other location refer to this “tragedy”.

The reason Mutatio ex Fabula works is because of our imagination. In any given circumstance, changing a context and generating a few responses to it will give the player enough information to fill out the rest. For example, you don’t need to produce a burning town to imply unrest; it suffices with removing the crop assets and changing a couple of dialogs so NPCs talk about a great hunger since their farm burned, and the player's minds will do the burning for you.

This is all i have gathered about Mutatio ex Fabula so far. Try to pin down which other games have used it, how were they used, and how has it grown outside of JRPGs. As it is an ongoing study, I’d also like to read what you think about it.