GTA IV was allegedly an open world game with a vibrant city to explore. But none of the NPCs wanted you to see it. Thankfully, the Wild West setting of Red Dead Redemption precludes the annoyances of cell phones--and returns control to the player.
David Hughes
Blogger
June 24, 2010

I've sunk 10+ hours into Rockstar's newest game Red Dead Redemption over the past week. It's a well-done game that could do wonders for a basically empty genre (Westerns) in video gaming. It's also one of the few games that compels me to strive for 100% completion--even though I'm no 'achievement whore'.

Yet until the game was actually in the drive of my Xbox, I was pretty skeptical. Sure, the game got awesome critical reception, but so did Rockstar's blockbuster Grand Theft Auto IV. And that game left a horrible taste in my mouth.

Before you think it, I'm no moralist when it comes to gaming. I enjoyed slaughtering rival gangs in GTA San Andreas, maxing my evil level in Fable II, and being further along the path of the dark side than even HK-47 in Knights of the Old Republic. It's because GTA IV is supposedly an open-world game.

Supposedly. Sorry, Rockstar, but I can't call a game 'open world' when ANY time I try to explore Liberty City my 'friends' are calling me to save their ass from gangsters, to go on a date, etc. In short, the NPCs didn't allow you to be your own character. Content was NOT at your own pace--at least without them grumbling about you 'ignoring' them. 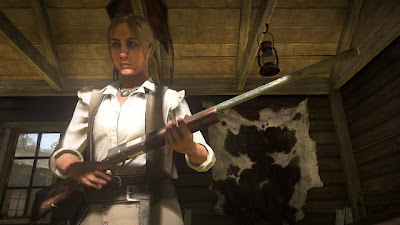 I'm never going to call you on your cell phone.

Red Dead Redemption fixes that glaring design problem. Missions are strictly at your own pace. Heck, if you wanted to explore "Oblivion" style for twenty hours, you could. I'd personally get a little bored just doing that, mostly because the vast majority of NPCs are just scenery--albeit scenery you can shoot.

The structure of missions is very similar to GTA IV, with mission grouped around certain main characters. Each time you meet one of those people, a mission is triggered. Eventually more characters are introduced, all with their own line of missions. It's a lot of content for a relatively simple premise but, unless you specifically trigger a mission, the plot will not advance. Period.

I've really enjoyed having that freedom, especially since the game allows you to be distracted by just about anything unless a mission is in progress or you've taken on a bounty. Shoot animals, ride all over the wilderness, trigger 'mysterious stranger' side quests, etc. Defend yourself against seeming endless supplies of bandits every time you take down a bounty target.

There are a lot of things I could write about, but mission control was my number one concern going into the game--and Rockstar has finally restored the 'open' to their brand of open-world gaming.