SEARCH
A minimum of 3 characters are required to be typed in the search bar in order to perform a search.
Announcements
Event
Free Webinar on 5/24: How Predictive Analytics Drives Mobile Conversions & Boosts Revenue - Register Here!
PreviousNext
Design
19 min read
article

Mage Knight - Lessons from the Tabletop

What can a video game designer learn from a board game? I walk through some key design decisions made in the recently released Mage Knight the Board Game as examples of how the constraints of tabletop game design help foster innovative design solutions.
Glen Cooney
Blogger
February 29, 2012

What? A Board Game in a Video Game Design Blog?
As much as I have devoted the last several years to the study of video games and how they are made, I have come across certain board games that have also caught my attention. Not the Monopoly or Scrabble games everyone knows about, but the kind found only in specialty shops, alongside Warhammer figurines and D&D manuals. They are the kind of games that I feel don't get enough love these days.

Consider this: video games have been steadily evolving over the past several decades, but this evolution has been held back by technological constraints. Alongside those technological constrains are the rising costs of utilizing these new technologies, driving the cost of developing video games up higher every year. What this means is that as games get more expensive to make, you start to see less variety and experimentation in the medium, as an ill-fated risk can mean a death sentence to a development studio, or a major loss the stockholders of a major publishing company. 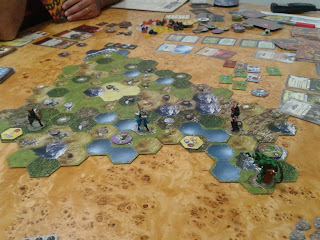 By contrast, the board game industry has been steadily growing. While remaining very much a niche market, they are able to thrive and grow without the constraints put on video games. The costs of development are very low, and a game prototype can be whipped up by a single designer working with a team of dedicated testers. And since the technology never really changes (aside from making pieces look fancier, etc), board games are able to enjoy a steady and constant forward momentum toward innovation and new creative frontiers.

Mage Knight the Board Game* is an example of some truly excellent game design to come out of the board game world. It's one I felt like highlighting here to show just how much video game designers can learn from our board game designer friends.

*Not to be confused with the earlier miniatures game set in the same universe.

Overview
Mage Knight is a fantasy conquest game where you take on the role of one of four Mage Knights and battle your way across the map, acquiring Fame, loot, and conquering various holdings across the map. All of your actions are dictated by a deck of cards, and gameplay is all about careful management of your cards and how to maximize the effectiveness of each turn.

The game is far too complicated to go over every rule in detail, so I highly suggest watching this video demo of the first round of play to get an idea of how the game is played. If you want to learn more and/or put your reading comprehension skills to the ultimate challenge, both the Rulebook and Walkthrough book are available through Fantasy Flight Game's official website (be warned, though, the books are not very well written and can be very confusing). Hopefully this will make enough sense as to not be too confusing should you not choose to look into those things, but just thought I'd give you a heads up.

So without further adieu, lets take a look at the game's various mechanics.

Put on your robe and wizard hat!

Mage Knight has a lot of interesting mechanics that interact together in fascinating ways. It strikes a strong balance between randomness and predictability that allows for deep strategies to emerge and for fun surprises to happen over the course of the game. Below are a few highlights of the system I found particularly compelling:


Banding together with our Board Game Brethren!

Sure, great board games like this one may not pull in the money or have the name recognition of video games, but ignoring them would be a big mistake in my opinion. There remains a vast treasure trove of great design decisions and discoveries and concepts borne out of board games that most video games today have not even considered. 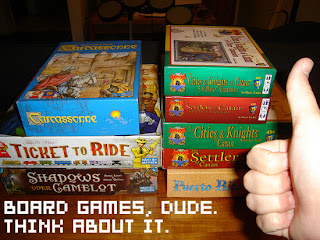 To me, good game design is good game design, whether it is on a table, TV, or computer screen. I hope that in some small way I can help bring more attention to great board games out there and foster a greater bond of mutual collaboration between the board game and video game industries. There is much we can learn from eachother, and even more to gain from it.