Here at Gamasutra, our wonderful editorial staff know that I absolutely will not shut up about X-Wing Miniatures. For better and for worse, it's the first game to draw me heavily back into the tabletop world since I was a teenager, and it's given me a new appreciation for the nature of live game development.

As announced a couple months back Fantasy Flight Games (which has made some dizzying purchases this year) will release a 2.0 edition of X-Wing Miniatures starting in September. This marks a huge shift for the game as it moves to being officially app-compatible, and restructuring many of the core rules that the game shipped with in 2012.

It's a transition that frankly, I haven't experienced before in either tabletop games or video games. A collectible card game might continuously introduce new cards, but it will also use drafting rules to limit what kinds of decks players can build. A digital game may obviously sell a huge expansion, or even just DLC, but those don't quite tend to come with such ground-level rule rewrites as what's happening in 2.0.

As more and more developers (big and small) begin to live in the new world of live games, X-Wing's 2.0 edition offers some notable design and production learnings that can transition back to the digital space.

It's notable how many 2.0-related design decisions don't even impact the immediate state of the game, but its future. Talking to the developer team last year, we briefly touched on the fact that every expansion to X-Wing Miniatures either had to rely on rules established in 2012, or in the slightly updated rulebook released in 2015.

That means, while developing every expansion, Fantasy Flight had to answer to decisions made years in advance, with a relatively limited amount of space to expand those rules based on new information.

In 2.0 however, Fantasy Flight has made two notable changes to allow more patching methods that can happen outside an expansion pack release. First, the company has announced integration with a web-based app that will contain updated information about upgrades and their point value (which I haven't been able to test yet). This keeps the game's meta in a more fluid state, and opens the door to more fixes besides just adding new upgrade cards to the game.

As an example, is an individual card winning too many regional tournaments? Just bump up the point cost before the world championships to force players to rethink their lists.

Second, Fantasy Flight has updated the cardboard pieces that mark each individual ship on the board, removing the fixed stats (which still exist on paper cards), and trading them for small hash marks that can help players mark a ship's position on the board, and which way it's able to attack. (You can see these white marks on the cardboard bases in the image below) 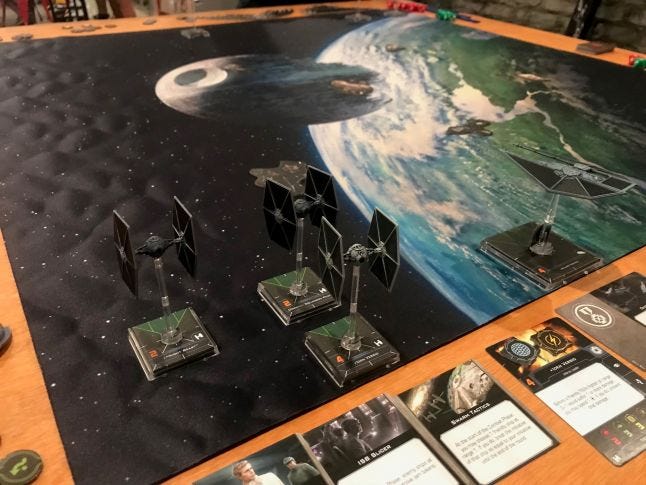 This is notable because, while it does impact many changes you can see in the game's conversion kits, it also opens the door for new design information that couldn't be communicated in the original version of the game. It's now possible to, for instance, properly state if a ship is "behind" another ship, as opposed to just being "out of another ship's firing arc." Ships can now execute 90 degree turns, thanks to the hash marks. You can compare this to the old cardboard, seen below, which had less positioning-related information, and more representations of a unit's stats and available actions: 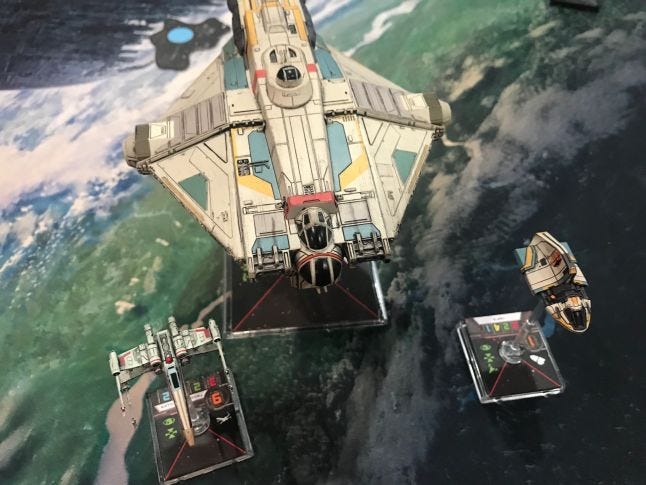 If need be, ships can also have new firing arcs added because every piece of cardboard has enough lines to portray that information (this is partly helped by the addition of a cardboard piece that creates a mobile firing arc).

These decisions, along with a few other notable additions to the game's rulebook (such as organizing game tokens by type), help show that these game updates aren't just an opportunity to retroactively fix unwieldy design, but create smoother paths to updating the game in the future as more design hiccups inevitably surface.

2.0's rule changes bring down the power ceiling, but expand the means to get that power

When games like Destiny, The Division, or World of Warcraft move to a sequel or major expansion pack, managing the upper levels of player power becomes an enormous task, and not just because it's a subject that dedicated players will be especially sensitive to.

In those World of Warcraft expansions, Blizzard chose to expand the level cap by 10 points, in order to slowly phase out weapons and armor that previously dominated the top of their play space. When Destiny jumped from 1 to 2, they dropped all players back to level 1 and made (evolving) changes to how progression would move forward at endgame.

But after a few games of X-Wing 2.0, it would seem that one design goal with this change is to lower how much damage players can deal per turn, while spreading out the number of ways for players to make that damage happen. Two new game tokens, the charge token and the Force token, open ways to granularly spread out dice modification. The new Bullseye arc (seen below, represented by the two parallel lines in the forward firing arcs of both ships), creates another conditional that rewards players for ambitious and risky maneuvering. 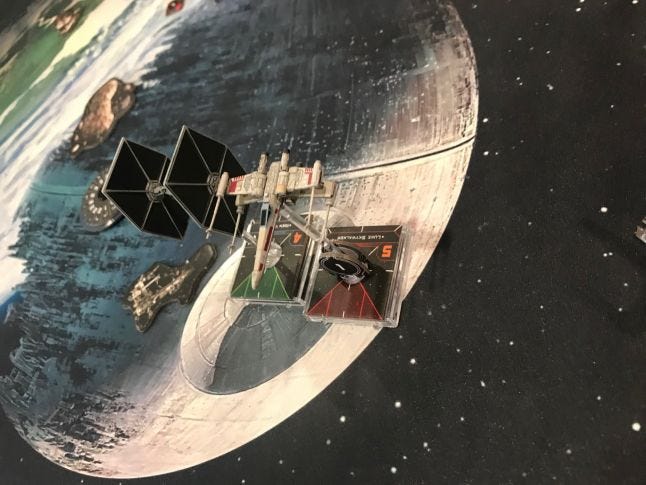 But elsewhere in the game, it's been announced that a handful of cards that kept the old power ceiling propped up won't be returning. Push The Limit, a card that enabled any elite pilot to perform any two actions in exchange for one detrimental stress token, is gone. In its place are selectively-picked linked actions which pre-determine what actions players can link together.

360 arcs, which allowed players to attack while not pointing their ships at their opponents, are now replaced by the aforementioned mobile arcs, which reduce the ability to attack in just any direction, but give the developers more possibilities to reward players who line up a precise shot.

Going over all these changes would take too much time, but at the moment X-Wing 2.0 seems to be a game where players seem less rewarded for trying to build squads that have incredibly high numbers of easily modifiable attack dice, but rather are tailored to creatively modify less red dice for more precise shots.

Refreshes are a good time to look at your pricing structure

The reality of any major update like X-Wing 2.0, Destiny 2, etc, is that the cost of development is expensive, and creating a new piece of software or game hardware means a large price tag for your already-paying players. In an age where player feedback (for better and so much for worse) is reshaping how developers interact with players, developers need to be canny about the way they price their updates and expansions.

To be clear, the X-Wing 2.0 upgrade is expensive. The new core game set runs $40, and individual conversion kits (which help veteran players keep their collections playable), are $50 apiece. That's a $90 just to play one faction in 2.0. In digital game terms, that's comparable to a special edition except it still wouldn't contain the "full game."

But it would seem Fantasy Flight has anticipated some sticker shock for that price, and they've paired it with some other structural changes that will impact player spending and their own revenue. First, if you total the cost of the expansions each kit is supporting, it's worth far more than $50.

Previously, a year's worth of ship expansions might cost up to $300, and players were encouraged to buy ships they might not even use to acquire upgrade cards that would benefit their preferred squadron.

Which brings us to Fantasy Flight's second change. The company has made clear that instead of cross-faction purchases, players can now be assured that sticking to their preferred faction means they'll have all the upgrade cards they need to field that faction's ships at full strength. That means the $90 purchase mentioned above could be viewed as either a fraction of X-Wing Miniatures' total game cost, or a foothold for selective players to dedicate themselves to one specific faction for the forseeable future.

It's a long-term promise to reduce the mandated buy-in for the game, in exchange for a high up-front price that doesn't mandate a full $190 purchase ($290 after the Resistance and First Order conversion kits are released later on).

You can start testing major 2.0 ideas in your 1.0 edition

Earlier, I mentioned the mobile firing arc, the bullseye arc, and a few other mechanics that are spreading across the 2.0 design space. But for veteran X-Wing players have been experimenting with these mechanics a little over a year now, since they were utilized in expansions like the Shadowcaster and the Kimogila fighter.

At the time, 2.0 was maybe just a rumor that popped up on Reddit occasionally. But thanks to their implementation, players weren't left in confusion at the announcement that they would become standard parts of many parts of the game experience.

While not every new feature can be soft-tested with players in this fashion (The game's new medium bases, a great addition to the game, would have been expensive to attempt), it may be worth looking at your upcoming features and see if there's a way to sneak it into your current game state.