SEARCH
A minimum of 3 characters are required to be typed in the search bar in order to perform a search.
Design
11 MIN READ
Blogs 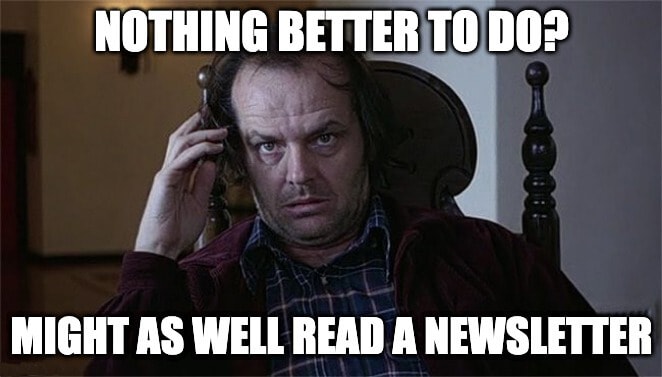 Hope everyone is staying safe out there. Here is more content for your friday.

Plenty of Shader Graph posts to satiate your shader appetite. How-to's on game genres such as FPS, Roguelikes, and platformers to get you started.

Lastly, a bunch of handy editor scripts below, as well, look out for the Asset Store sale starting next week. Stay tuned and enjoy!

Unity 2020 roadmap: Recapping the tech and solutions coming this year - A lot is happening at Unity this year, and we’re excited to share some of the highlights. So grab your favorite beverage and dive into this post to learn about our recently shared roadmaps on core Unity technology and game-changing offerings for live content, as well as the upcoming Unite Now digital programming series.
Unity

Introduction to Shaders in Unity - Ever wondered about shaders in Unity? In this tutorial, you’ll learn what shaders are, how to display vertex colors and how to animate within shaders.
raywenderlich.com

Stylised Water in Shader Graph and URP - Stylised water is the rite of passage for every shader creator on the Internet. Although there’s already a deluge of water effects out there, URP is still relatively new so one more won’t be flooding the market. Today I want to recreate the water from The Legend of Zelda: The Wind Waker - it has a very distinctive, stylised appearance which we should be able to reconstruct in Shader Graph and Universal RP. Let’s dive right in!
Daniel Ilett

Pixelation Shader - Are you nostalgic for the past? Let's see how you can achieve this cool retro effect in a 60 second #shadersdonequick tutorial! You can get the graph here.
Alexander Ameye

Dark Side of the Wall - Learn how to partially bypass the post-process effects.
Kabuk Games

Sketch Post Processing - @harryh___h awesome sketch deserves a breakdown. Took a month, but I love it . Unity URP, All Shader Graph, breakdown at the end, and here's the git.
Christopher Sims

Terrain and Mesh Blending in Unity - In this tutorial I’m going to go over how to blend meshes with terrain (or even other meshes) in unity. This tutorial is fairly advanced, but I’ve tried to break it up into individual stages.
Louis Waloschek

Artists’ best practices for mobile game development - Our partners at Arm have put together a series of in-depth guides to help technical artists and game developers optimize their game art and improve performance when building for varied mobile hardware.
Unity

One Million Sprites. More Than 120fps. DOTS Not Required. - When you lurk in the DOTS forum, you’ll see guys like this who made a DOTS library that can render one million animated sprites yet still get 60fps. I have created my own DOTS sprite renderer which is good enough for our game but it can’t handle a million. I got curious.
Coffee Brain Games

A simple guide to get started with Unity ECS - How to easily implement the Entity Component System pattern in your Unity DOTS project.
Marios Koutroumpas

How to find more information about a DOTS packages? - Do you want to learn more about the internals of DOTS implementations such as Burst or the C# Job System? In my recent blog post, I'll explain how.
kazum93

Function Types: A Spectrum - C# gives us lots of types of functions for us to call. We must constantly decide between them. Should this function be static? Should it be virtual? There are many factors that go into making the decision. Today we’ll look at the function types as a spectrum and hopefully get a little perspective on our options.
JacksonDunstan.com

A turtle made it to the water: projectile motion, camera rotation and object pooling - As a big fan of the game World of Warcraft, I wanted to recreate one of its mini-games, which is a quest in which the player has to attack crabs and albatrosses by throwing a projectile at them so that the baby turtles reach the water.
Laura Almón Manzano

Hang Line Postmortem Part 1 - How pirates made my game successful - Spoiler: I was successful with my first indie game because it got pirated. But before we get into that, let me introduce myself. Hi! I’m Ed, and I survived making my first indie game by myself! Now that the shock of achieving this miracle has worn off, I’d like to give something back.
Ed Kay

Tutorial: How to Make a 2d Platformer in Unity - Custom Physics Shapes on Tiles and Slopes
rookj

Building a Roguelike From Scratch – Unity Tutorial part 4 – Player and Movement - Hello fellow rogues! Now we finally have our map, so let’s go to the next step: spawn the player character and let the player move it around.
Nomad Hermit's Grove

Video Chat with Unity3D, the ARFoundation Version - In this Augmented Reality (AR) tutorial, you’ll learn how to communicate and chat with friend in AR.
Rick Cheng 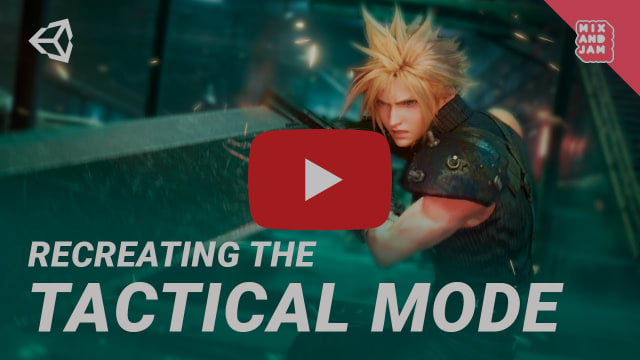 Grappling Gun in 3 steps in Unity - How to make grappling gun in Unity 2D in 3 steps?
Technical Friends YT

How to make a 2D platformer (E01 Character rigging) - Unity 2020 Tutorial - In this tutorial series you will learn how to create a 2D platformer in Unity. I recommend that you have unity 2019 or newer installed when following along.
inScope Studios

Dapper Dino Presents: The Building Blocks of Unity (Beginner Livestream) - Along with Andre (better known as Mix and Jam), I’ll be discussing two of the “building blocks” within the Unity engine: GameObjects and Components. During the stream we’ll build a target-shooting game, learn essential Unity tips, and answer your questions throughout with live Q&A.
Unity

Creator Kit: FPS (Overview) - Welcome to the FPS Creator Kit! This bite-sized kit has magically miniaturized you, the doctor, into a tiny sickness-fighting force of good. Your mission: to travel through your patient’s body, destroying evil germs wherever you find them.
Unity

I made DOOM in Unity! - Play the Game and Download the Project Files here.
Code Monkey

Unity3d Oculus Quest Hand Tracking Setup With Physics - Today I like to show you the results of my experimentation with Unity Oculus Integration hand tracking and what changes I had to make to ensure physics were more accurate when interacting with hands and rigid bodies.
Dilmer Valecillos

Unity Save System Tutorial - How to make Singleton ScriptableObjects. [also check out Jimmy Vegas' How To Make An FPS WOLFENSTEIN 3D Game Unity Tutorial 031 - SAVING THE GAME]
The Messy Coder

Blender to Unity : Moving Platforms Tutorial - In this Blender 2.8 and Unity tutorial I show how I created a low poly platform withh Blender, the export it as fbx and import it into my Unity project, the Unity Low Poly game Kit.
Jayanam 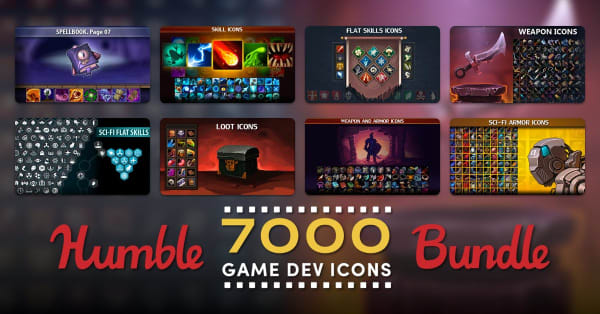 HUMBLE 7000 GAME DEV ICONS BUNDLE - Create your own PC or mobile games, software, applications, websites, and more with this bundle of icons! Your purchase will support the following organizations responding to COVID-19, Partners In Health, Action Against Hunger, and Red Nose Day. In addition, you may also choose a charity of your choice! $449 WORTH OF AWESOME STUFF. PAY $1 OR MORE
Humble Bundle Affiliate

Easy Save - The Complete Save & Load Asset - Why use Easy Save? For Amateurs... It's easy to use and well documented For Experts... It's fast, feature-rich and extremely flexible.
Features includes: Compatible with most platforms. Fast and Lightweight Serialization. Fully Documented. PlayMaker Support. 5-star Customer Support. Secure Save Data with Encryption. Save & Load from Web. Cross-Platform Save Data. Save Almost Any Type. Save as Spreadsheet. File IO.
Moodkie Affiliate

Game Assets And Resources - This page lists free and paid game assets and game resources for making 2D games, 3D games, Unity games, mobile games, and other games. While most of these assets are free, some may offer a freemium model with some free assets and resources and some paid.
Hotpot.ai Open Source

GradientWindow.cs - A Unity editor script which lets you save a Gradient as a texture file (place the script inside a folder named Editor).
Daniel Ilett Open Source

DisableExitTime.cs - Most of the time when I create an animation transition I want it to transition back immediately, instead of dealing with Exit Times. So I wrote an Editor Script that will set several at once.
Jeff Harper Open Source

SimpleProfilerWindow.cs - I made a little memory graph window for debugging memory leaks that happen at seemingly random times, and to build up some familiarity with general memory usage (oh look it just grew by 1GB, fun!).
joon Open Source

MyBox - MyBox is a set of tools, features and extensions for Unity. It is MyBox. Now it’s yours too. The package is available on the openupm registry. Includes custom Attributes, Types, Tools and Features.
Deadcows Open Source

Unity .abr Importer - Ever wanted to use Photoshop brushes in Unity? Wait no more! This importer turns Photoshop brushes (.abr files) into a series of alpha textures. These can easily be used to create terrain brushes.
William Enders *Open Source

Unity Symbolic Project Linker - I was sick and tired of manually creating the symbolic linked version of our #Unity3d project needed for multiplayer testing. Enter the Unity SymLink Creator! It's free and open source for anyone interested!
Thomas Brown Open Source

Free lowpoly packs - Are you at home and don't know what to do? MAKE A GAME! I've made 70 COMPLETELY FREE lowpoly packs. You can go and download all of them on my website!
Quaternius 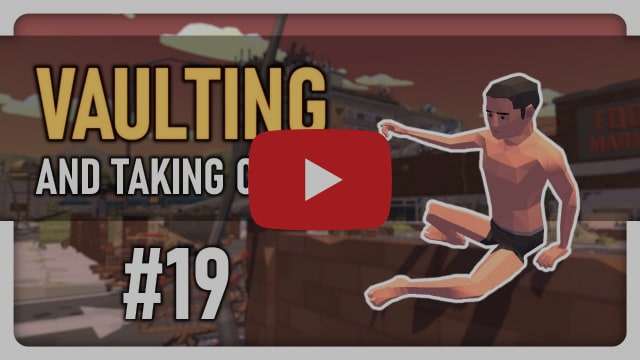 N.E.S.T - N.E.S.T is an action-packed, looter-shooter mobile game that entrusts you to save Earth from an alien invasion after a rogue interstellar radio message leads them straight here. Unconventionally however, these aliens don't arrive via spaceships. Instead, large nests crash into Earth's surface, and it is up to you to destroy them all before the aliens regain their full strength, and take over our beloved planet.
Daniel Lochner