Inside the lo-res Roguelike FPS inspired by Canadian politics

This tough shooter with base management elements harkens back to the glory days of classic FPS titles like DOOM and Wolfenstein 3D.
Christian Nutt
Blogger
March 30, 2016

Bunker Punks, which launched as an Early Access title on Steam today, harkens back to the glory days of classic FPS titles like Doom and Wolfenstein 3D. A tough shooter with base management elements, Bunker Punks encourages players to go through the randomly generated levels multiple times to earn enough credits to upgrade their base of operations and improve their chances of survival.

The story of Bunker Punks came to Shane Neville when Canada was entering its ninth year under a Conservative government. In Neville's view, civil rights were being taken away, privacy rights eroded, corporations were gaining power, and there were huge environmental problems across Canada. The country is now under new leadership, but before that happened Neville channeled some of his perceived frustration and anger into making a game, and thus Bunker Punks was born.

Bunker Punks tell the tale of a group of revolutionaries named The Zero Sum Gang, a ragtag bunch of rebel celebrities who are trying to overthrow a corrupt corporate government. Led by the courageous pistol-slinging Molly Pop, they attack and pilfer corporate strongholds to bring much-needed supplies back to their underground bunker deep in the wastelands.

Their activities had caused the government to label them as “Bunker Punks” in a propaganda campaign to discredit these rebels and their raiding activities. “If some of the posters in Bunker Punks resemble campaign posters from the last Canadian election, it’s not a coincidence,” says Neville. 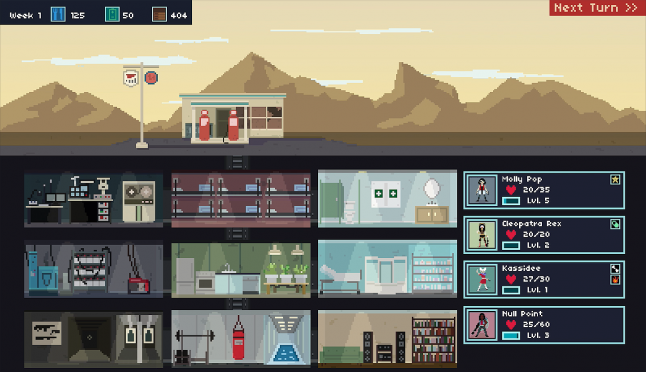 The idea for base-management gameplay in Bunker Punks came from Neville’s own fascination for customization of build-outs in games. Similar to Luca Redwood’s 1000000 and You Must Build a Boat, players could experiment with different bunker build-outs for varying effects and advantages.

“I wanted something to keep the player engaged on a longer basis. The FPS part was great for moment to moment gameplay, but I wanted the player to be considering long-term decisions in their gameplay as well,” Neville says.

The original design of Bunker Punks included a full bunker survival sim where punks would heal day-by-day, events could happen in the bunker (such as illness or low morale), but it ended up being not very engaging at all. This idea was scrapped for a simpler bunker management system, simply because the effects of what happened in your bunker and how they impacted the FPS gameplay were too ambiguous. 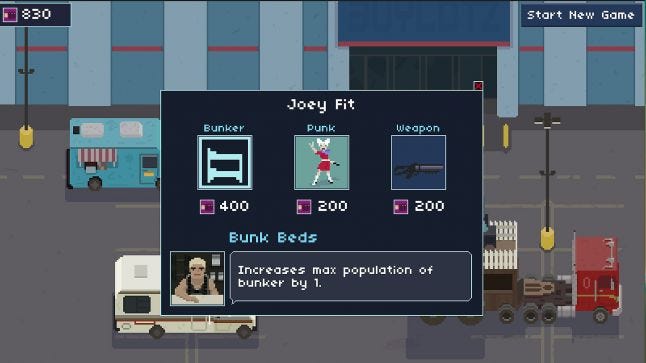 “It felt like the bunker building was getting in the way of playing the game,” Neville notes. It took a few complete redesigns before bunker-building reached the point where it is today - a non-linear skill tree for every member of your gang.

“You can increase damage buffs, stats, and unlock special abilities now,” says Neville. “The first few types of upgrades the player has are quite simple and obvious: weapon and health upgrades. As you play, you unlock more subtle upgrades like economic upgrades and speed buffs.”

The more you play, the more you internalize each punk’s strengths or weaknesses. Whenever a punk dies, the remaining members of the gang get buffs based on their stats. The rest of the gang might end up having more armor or be better with a particular weapon type. This makes your last character more important.

“Rare item and weapon drops also play into this. If you get some great armor that buffs pistol damage on your first couple of levels, you might want to optimize that with whom you choose for your next raid.” 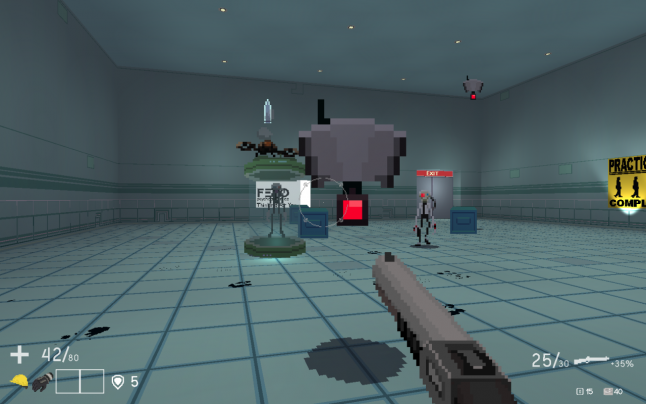 The decision to include mainly classic FPS weapons was also one that wasn’t taken lightly. Pistols, shotguns, assault rifles, baseball bats and rocket launchers are all weapons that most players will already be familiar with.

“They understand how a shotgun works, and what happens when a rocket is launched. This makes the game more accessible right off the bat,” says Neville. “But there are additional weapons which are more complicated. An example of this would be the Grenade Launcher which lobs rolling, bouncing grenades that do a tremendous amount of damage, but it can only be found much later in the game. It’s difficult to use, but rewarding.”

“And there have been more than a few weapons that didn’t make it past prototyping. It also took a long time to get melee to a point where it was fun and felt good. But there are still a lot of weapon ideas I want to try as well.” 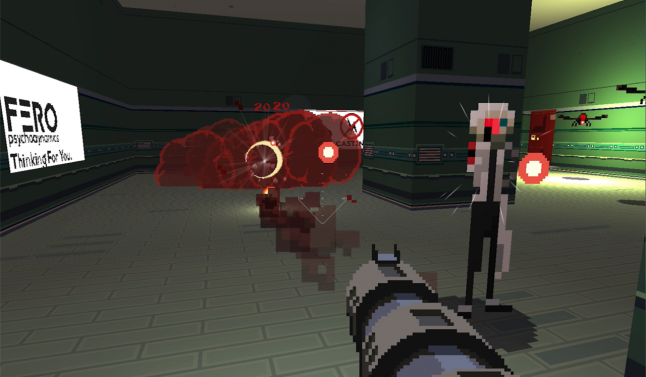 Something else which draws the attention of any new player to Bunker Punks is the display of hit point damage whenever an enemy is being shot at. According to Neville, it’s there to help the player understand the weapon system and how it works with other systems in the game.

“I did a lot of playtesting with Bunker Punks, and I saw a lot of players make poor choices while they were playing because they didn’t fully comprehend the systems at play,” says Neville. “After the display of hit point damage was added, playtesters started to equip themselves more intentionally as opposed to picking a weapon just because it sounded cool.” 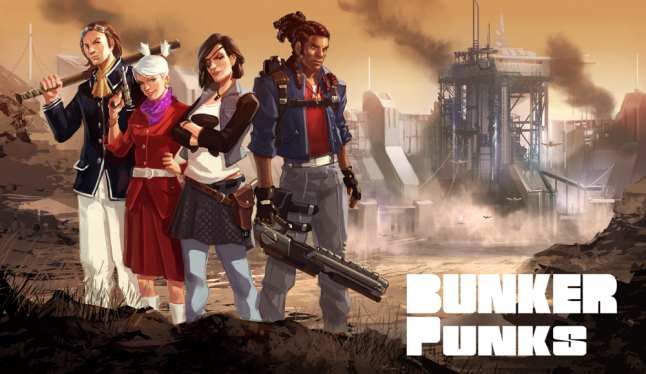 Bunker Punks is still in Early Access, and Neville admits that there is still a lot of content to be added. More weapons, items, bunker upgrades, playable characters, enemies, world objects, narrative elements and level types are just some of the features on his wish list.

“There are also a few new mechanics that I want to try out,” Neville says. “I’m not sure they’ll work, so I don’t want to promise something and then cut it later because it didn’t work out. That said, I definitely want to make the individual punks more unique and most of the potential features are based around that.”

“But there are definitely no plans for multiplayer,” he continues. “Bunker Punks is not really designed to be a co-op game. Adding competitive multiplayer would require completely different level generation algorithms to create compelling levels, and that would have been a very different game.”