Improbable: How a team of 15 builds a physics-based MMO

Why a small team at Surgeon Simulator dev Bossa Studios is using Unity to build a persistent, physics-based, high-flying online world -- with the help of a mysterious tech startup.
Alex Wawro
Blogger
October 28, 2015

When you mention Bossa Studios, I think of floppy bread and spy watches. I do not, as a rule, think about massively multiplayer airship games.

The British studio is best known for I Am Bread and Surgeon Simulator, though its body of work stretches beyond that and will soon encompass a high-flying massively MMO game: Worlds Adrift.

The project is chiefly interesting because of its ambition: Bossa has a team of 15 people working in Unity to build a persistent, scalable online world with the sort of physics-based game design the studio is known for.

The team's goal, according to designer Luke Williams, is to replicate the open-ended appeal of early MMORPGs like Ultima Online rather than their more rigid, content-driven modern siblings.

“When you see Blizzard struggling to keep up with demand for -- when all the World of Warcraft players are leaving because the content has dried up -- well, if Blizzard can't handle it, how the hell can a small studio like ours keep up with that?” Williams tells me during a recent phone conversation. “We’re calling back to Ultima, I think, in terms of having a huge open world to just explore.”

But by the same token, how the hell can a team of 15 hope to build a game of that scope in the year between when Bossa began seriously working on Worlds Adrift last November and when it aims to ship it late this year?

The answer, as it turns out, is that they can’t -- they’ve had to work with an external team at Improbable, the London-based tech startup that’s raised millions in investment to develop what it describes as an operating environment for building virtual worlds.

“You can think of our technology as an operating system; we’re orchestrating all these processes together to create a bigger experience,” Improbable CEO Herman Narula tells me, via phone. “Nobody at Bossa needs to worry about server infrastructure or networking -- all those things are part of the OS-like layer that we provide. The game really just needs the developers to build gameplay using our APIs and an engine, like Unity.“

Though Improbable’s market isn’t limited to game companies, Narula says the firm has been refining its own technology with Bossa’s help as the two work together on Worlds Adrift. 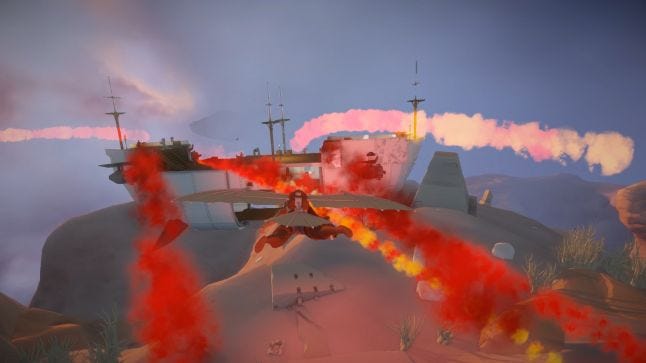 The game will be the first real public test case for Improbable, and Bossa CEO Henrique Oilifers says the game would never have happened if not for a chance meeting with Narula last year; the project was originally conceived (as Traveller) during one of Bossa’s regular game jams and shelved because it was too challenging to implement.

“This is something we could not do with 15 people in a year if we didn’t have the Improbable platform to work with,” Olifiers tells me during the same (crowded!) phone call. “I couldn’t do the game, as it stands today, with four times the team -- I couldn’t do it with 60 people without this technology.”

Imagine each of the squares represents a portion of the MMO game world overseen by a single server, and each is capable of handling a certain amount of data. If a developer wants to exceed that limit in a given square, they have to subdivide it and give each smaller square its own server, which in practice means increasing costs (you have to pay for more servers) and increasing server overhead as you now have ten servers exchanging data instead of one.

"Hooking up with Improbable allows us to avoid these completely arbitrary limitations," says Olifiers. "We can design a game that can say 'Oh, there's a lot of physics-intensive stuff going on over here,' and turn a bunch of workers to focus on that location, handle computing those physics and whatever else is going on -- AI, whatever -- and talk to each other while the event is going on. When that event is over, they go do something else."

Narula claims those "workers" are just Improbable's way of referring to instances of the game engine (in this case, Unity) running on a giant virtual server distributed across many machines in an Improbable cluster. Part of Improbable's job is to manage these workers, creating or killing them as demand shifts and migrating them across machines to minimize lag (alongside client-side prediction algorithms) for players.

"Doing this is like playing a gigantic game of musical chairs with lots of flaming boxes," the Improbable chief tells me. "We're constantly bringing up and bringing down game engines and smaller, other kinds of specialist engines. They're no longer like the monolithic gods that run a particular area of the world; now they're just like, specialist services that handle specific stuff like physics or something else."

What this effectively offers, from a game maker's perspective, is the promise of building a massive online world without needing to create your own server-client architecture -- you just have to trust Improbable to handle things, and build your game using its APIs.

It may not be for everyone, but Bossa seems to appreciate having the opportunity to see how the physics-based design philosophy exemplified by games like I Am Bread works on a massive scale.

"I love designing games like this because you can build a core set of mechanics and then just let the world be played with," says Williams. "I think this form of game design sort of taps into this raw desire for players to learn how things work. What we're trying to do in the MMO space is to bring what we've learned from games like Surgeon Simulator and I Am Bread into an online game environment to see if we can make an interesting MMO game, because the genre has felt a bit stagnant recently."

He and his team are designing Worlds Adrift such that if a player cuts down a tree, it will fall, roll down a hill and stay there until someone does something with it or the entire game shuts down. Players start out on islands floating in the air, but they can use the game's suite of crafting systems to construct airships and explore, building things and fight with (or alongside) each other.

More interesting than the game itself is what its development portends for the future of online game design. If Worlds Adrift works out, it will showcase how new tech may open up MMO game development to developers that have neither the resources nor much interest in fielding games cast from the World of Warcraft mold.

"We know our audience," Olifiers tells me. "It's the person who stops and looks at systems in games and says 'What if...?' That person plays regular games, says 'What if?' and nothing happens. Our games aren't like that. If you try something, chances are you will be rewarded. That's a core design goal."