Dissecting just what makes my adrenaline pump during a specific portion of Imperishable Night, wherein gameplay is simplified and I really shouldn't be breaking a sweat at all.
Michael Molinari
Blogger
March 07, 2009 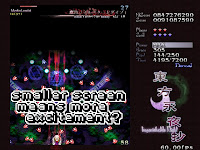 In Imperishable Night's second level boss battle against Mystia Lorelei, there is one phase of the battle wherein most of the playable area of the screen is shrouded in darkness, despite an already hectic array of bullets dancing about in all directions (which also can be considered a clouded area of bullets, giving me even less content to speak about). All you have to work with is a small circular area surrounding you, forcing you to focus moreso on bullet dodging rather than shooting the boss as a top priority. I've commonly found myself leaning to the edge of my seat, sitting perfectly upright, licking my lips in anticipation, and giving off a wry smile that invites the game to "bring it on."

However, I sometimes stop to think why I get so excited over something like this. At first impression, it feels as if this phase requires exceptional reaction time and swift maneuvering in order to survive (both of which are certainly true), but for a few reasons, this phase is far easier than the rest of the battle.

First off, you have only a small area of the screen to worry about paying attention to, as opposed to the entire screen otherwise (but in my eyes, the player need only worry about this immediate surrounding area to successfully survive in any situation, sans unscheduled evacuations to other locations).

Second, in viewing the entire screen of bullets, the eye will quickly locate the bullets that are an obstacle and that pose an immediate threat, negating all others. Players of this game specifically know that early patterns of bullets will be in entirely different configurations by the time they get to you below. 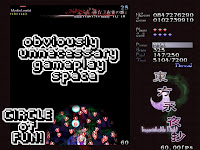 This brings me to question: Why does this portion of the boss battle bring the most tension, excitement, exhilaration, etc., despite it simplifying the game and bringing me to the most primitive of mechanics (the process of movement

)? I suppose it's in the presentation. You're forced to watch this ominous, dark clouded area swallow up your battlefield, leaving you with little to hold onto by the time you gain back control.

And then once you complete that phase, the viewable area becomes even smaller, making you feel as if there's no room to even breathe, let alone dodge seemingly hundreds of bullets.

Keep in mind that this phase would have failed design-wise if it weren't for a set-rhythm of bullets that are repeatable and not tied to player position. Thankfully, the barrage of sudden pain spikes is known to be escapable, a feature that makes the entire experience worthwhile and memorable.

And now, a section of the Level 2 boss battle of Imperishable Night:
[YouTube link here]