Tinker Knight is at once the most diminutive and gargantuan associate of the Order of No Quarter, and along with the Enchantress, one of the two most cinematic.

Yacht Club Games co-founder and programmer David D'Angelo gave Kickstarter backers another inside look at Tinker Knight, mechanical master of Clockwork Tower. "I actually programmed that boss live on Twitch," he said. A streaming service engineered for games, Twitch lets players broadcast themselves playing their favorite titles or watching others play, chatting with viewers as they go along. In planning Shovel Knight's Kickstarter, the team hit on a way to subvert Twitch: Invite backers to watch them design parts of their game, even accepting suggestions.

"It was weird because we didn't have a design for [Tinker Knight], which was pretty unusual for us, going into a boss," D'Angelo continued, reflecting on his live stream. "'Hey, here's Tinker Knight with a wrench, and a big mech. Make a boss out of it.' Okay! I just free-wheeled it on Twitch." 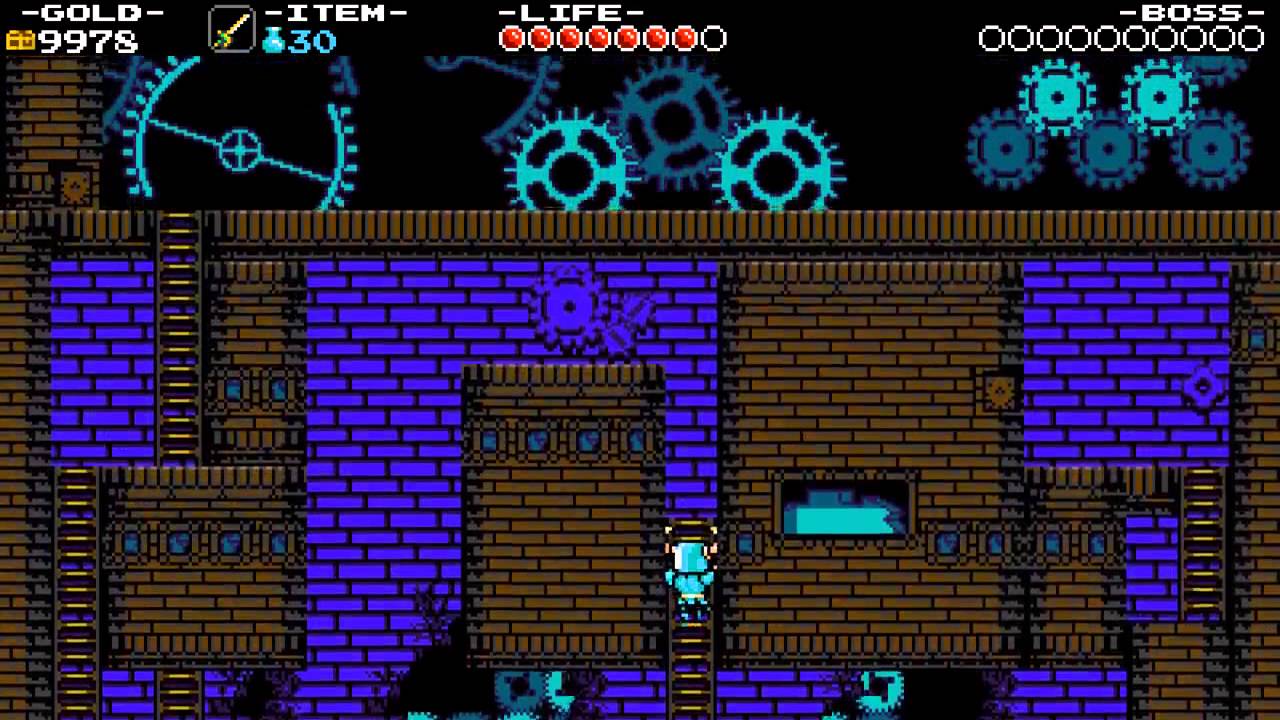 At the end of Clockwork Tower, players drop into a dark room occupied only by a workbench. A tiny man wearing a welding mask and spotless apron looks up and crosses wits against Shovel Knight. Tinker Knight flails and trips, wide open for players to unload slashes and shovel drops. Just when players think they've won, the floors gives way and players drop into Tinker Knight's second workshop.

"A lot of times," Yacht Club co-founder and Shovel Knight director Sean Velasco said, "we joke that, 'Let's do a floor break here.' A floor break is how you up the ante. With Tinker Knight, we said, 'Oh, yeah, we'll do a floor break.' In the new campaign—"Specter of Torment"—every boss floor breaks, just because when you're [making] a side scroller, there are only a few ways you can clear the scene; having the floor break out from underneath you is one of the easiest ways to do it."

Now that he's lured Shovel Knight into his trap, Tinker Knight unveils his War Machine, a gigantic tank covered in spikes and missile launchers and armed with a striped lance. Tinker Knight sits behind the wheel of his mechanical monster, shooting off homing missiles and unloading bombs. "The idea was, we want to have this tiny character that kind of sucks at first, but then at the end he gets into this giant [machine] and is all cool and badass," Velasco said. "The War Machine is kind of an homage to the Guts Dozer [in Mega Man 2], but we also tried to break off and do our own thing."

Yacht Club felt some apprehension in designing the War Machine. "The second form of Tinker Knight was weird because we'd just come off Double Dragon Neon and we'd done this huge tank battle, and no one liked it," said D'Angelo.

"Ever since Contra III, I would say that all of us consider jumping and riding on a missile to be a quintessential videogame thing."

The issue, he explained, was that Double Dragon Neon's tank battle took the form of a platforming challenge in a game centered on simple brawling—a square peg crammed through a round hole. The object was for players to avoid projectiles and climb up the tank to deal damage to a weak spot. "There were bullets all over the screen, and they were hard to see because there were so many," D'Angelo continued. "They were all over the place and it was hard to tell where your goal was. It was a mess. We were doing [Tinker Knight's] tank battle, and everyone was like, 'This is going to be a disaster.' It wasn't like a normal boss; it's a platforming challenge, not a boss fight per se."

Over multiple rounds of play testing, Yacht Club solved the issue that had plagued Double Dragon Neon. In Tinker Knight's second phase, players must mount the tank and bash War Machine's head. To do this, they can pogo off a bouncy bomb and land on the lance, but the lance twirls in mesmerizing fashion, like a barber shop pole, so players must keep their footing to avoid falling off. Another option is to wait for Tinker Knight to fire a line of missiles that come in threes and fly in a stair-step pattern. 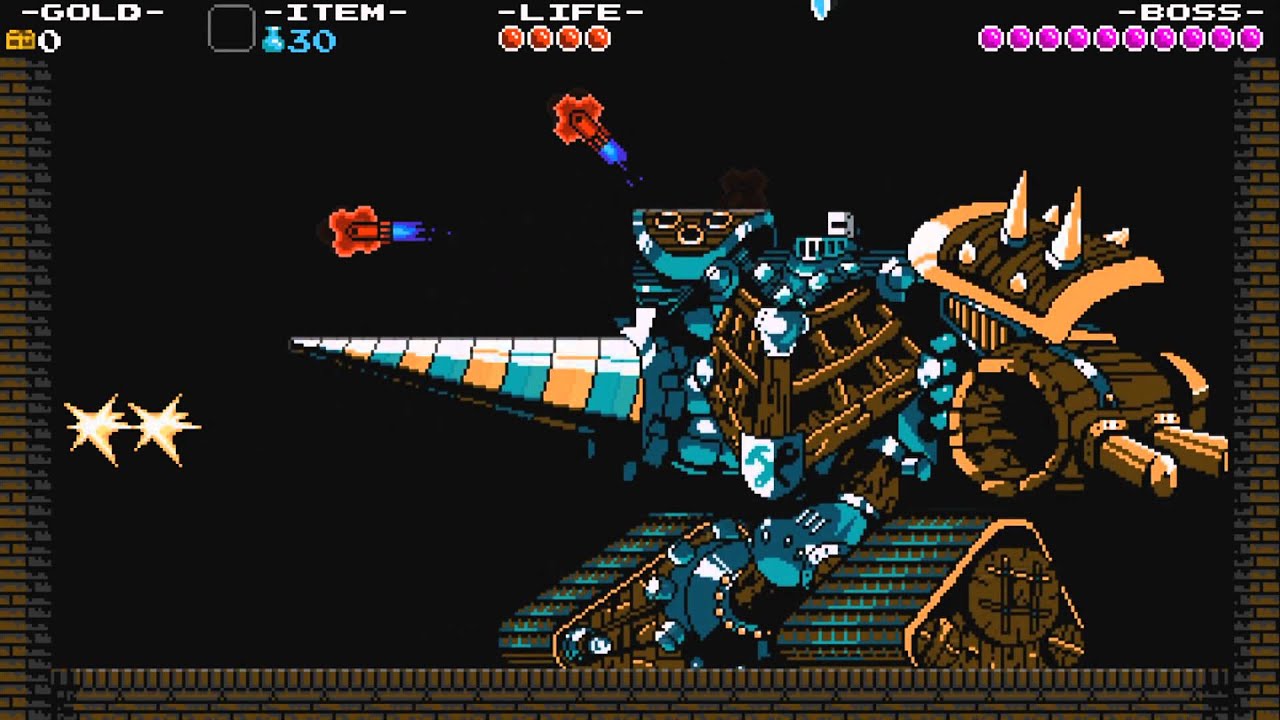 "We tried to think about, how is Shovel Knight going to get up there?" Velasco said. "We came up with the idea of jumping on missiles. Ever since Contra III, I would say that all of us consider jumping and riding on a missile to be a quintessential videogame thing: 'We've got to have riding on a missile.'"

Missiles blast out of shoulder-mounted launchers, giving players a hazard to be mindful of when they ascend to War Machine's head. The game lets them inflict only so much damage before the War Machine bucks them off. They knew that figuring out how best to reach the boss's weak spot would be more rewarding than getting lucky once and bringing the battle to a close.

"It felt like a lot," D'Angelo said, "but it was still small and understandable, learning what elements you had to interact with. Each part is a discrete stage. When you're at the bottom, the missiles at the top aren't coming even close to you, so you don't have to think about them at all. All you're thinking about is [climbing] his lance. So it's like, 'Once I figure out that step, then I can think about the next step.' Having none of those intermingling attacks helps with the clarity of [the fight]."