How the Nemesis system got an indie makeover in Star Renegades

Star Renegades is a new turn-based role-playing game from Massive Damage, a mid-sized all-remote studio that made some waves on Steam with Halcyon 6: Starbase Commander. It's got a neat synthwave vibe, intensely detailed pixel art, and to our surprise, a riff on the Nemesis system first seen in Monolith's Middle-earth series.

In case you missed those adventures of hack-and-slashing the Uruk-Hai, here's a quick primer on the Nemesis system: Instead of a linear class of elite boss fights, the folks at Monolith filled their open worlds with procedurally generated orc hierarchies.

Their existence was defined by randomly pulled characteristics that would be updated as the player either killed them, controlled them, or lost battles to them. It's a system that rewards exploration, research, and manipulation as opposed to brute force.

In Star Renegades, the system is tuned for a different purpose: refreshing the JRPG experience to take what was traditionally a 40-hour adventure and make it palatable for a modern audience. Here's a quick breakdown on the decision making behind this system from a chat with creative director Peter McLaren and studio head Ken Saito on the GDC Twitch channel.

Star Renegades' procedural bosses come on the back of a game that is trying to take the fun of classic turn-based combat and make it engaging for shorter play sessions. McLaren explained that one design goal was to drill into why classic RPGs like Final Fantasy or Golden Sun were fun, but to meet the schedules of players who have aged, and have less free time than when they were kids. 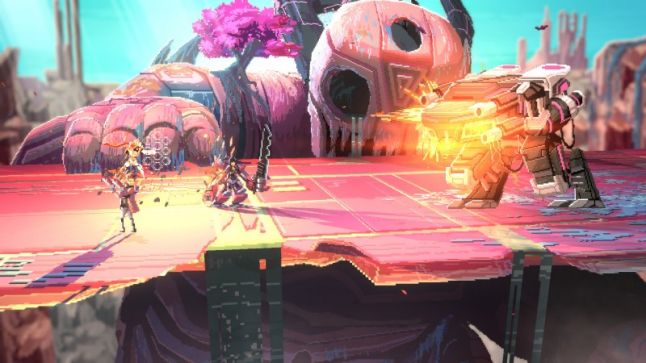 This decision is in contrast to how Final Fantasy itself has evolved, a decision McLaren says was deliberate. "Being indie, you have to do things that triple-A is not doing, you need to actively stay away from that fire because if the trend is going that way, and you release something triple-A companies are doing just as well, you're not going to be able to compete with it."

So with that in mind, why does a mechanic from Monolith's triple-A megafranchise work in this indie RPG? Well it's worth pointing out that six years after the debut of the Nemesis system, few other games have attempted to mimic it. McLaren explained he only understood Middle-earth's Nemesis system once he began developing one of his own.

"It's undergirded by the core aspects of [Middle-earth: Shadow of Mordor]," he explained. "Free exploration is a big part of what makes that system work....along with the fact that all the orcs fundamentally come from the same primordial goo, which is just a character with two arms, two legs, and a weapon, who's trying to kill you."

"The fact that they're coming from a common space makes that system possible, so there's a lot of ingredients that you need to make your own version that works." 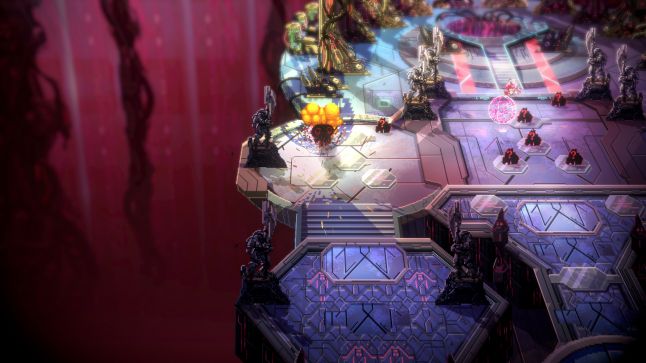 Since Star Renegades doesn't have expansive open-world combat, its enemies on the alien hierarchy use a mix of strengths and weaknesses that intersect with how players can build the characters in their party. One might be resistant to a certain attack type, another might have a personality trait that reacts to certain status effects.

And since the game has a roguelike structure where players can select and evolve different abilities every run, Massive Damage was able to tune enemies to either challenge or reward players who built their parties along different paths.

It opens the door for players to create their own relationships with particular bosses--if one escapes them and adapts to their abilities later on in the run, it can feel like the game is responding to how the player has specifically built their party, and challenge them to double down or shift gears.

That "partybuilding" component, in Saito's words, put Star Renegades in a bit of an odd position with playtesters. The game isn't a full roguelike, nor is it a deep RPG, but using the latter's combat system for the former's short, repeatable play segments, giving it a unique identity that fosters some special systems.

"We're kind of in this in-between space," he said. "We've heard some people would rather see a more tighter, roguelike experience, and some people that would like to see a more expanded JRPG experience. Being in the middle was a little tricky for us."

It's an interesting direction for developers interested in picking up the banner of the JRPG franchise, but it's worth knowing that for Massive Damage, the inspirations from other games far removed from the genre have been a natural fit.