How RimWorld fleshes out the Dwarf Fortress formula

"I was fascinated by how the player and game could work together to create a narrative in Dwarf Fortress. I wanted to push that even further, and do it in a way that's approachable."
Alex Wawro
Blogger
August 11, 2016

In a 2013 blog post, developer Tynan Sylvester described what he calls he calls “The Simulation Dream,” a desire for a game world that perfectly captures every nuance of and complexity of the world that it models.

He calls it "the idea of making a complex simulation of a story world, which creates fascinating emergent stories as powerful as those you might write yourself."

But Sylvester observes that players don't actually want as much simulation as they think they do--for instance, they didn't appreciate the carefully designed ecosystem of Ultima Online, because they were too busy killing every creature they encountered to get ahead in the game, and it was impossible for any one player to see how the depletion of the wolf population was effecting the deer population.

And the rich emergent systems of The Sims may lay the groundwork for rich narratives, but they are often narratives that the player superimposes on the onscreen action.

The secret, Sylvester theorized, was to create a simulation that was not overly complex, and that a player can observe and comprehend. This theory rests at the very core of RimWorld, Sylvester’s recently released collaboration with Ludeon Studios. It's a simulation sandbox game blending elements of science fiction, the wild west, and the infamous sandbox management sim Dwarf Fortress.

RimWorld is about survival. As the Godlike leader of a group of crash-landed survivors, it’s the player’s task to help establish a new, functioning colony in which survivors can build up their camps and steadily improve their own conditions. 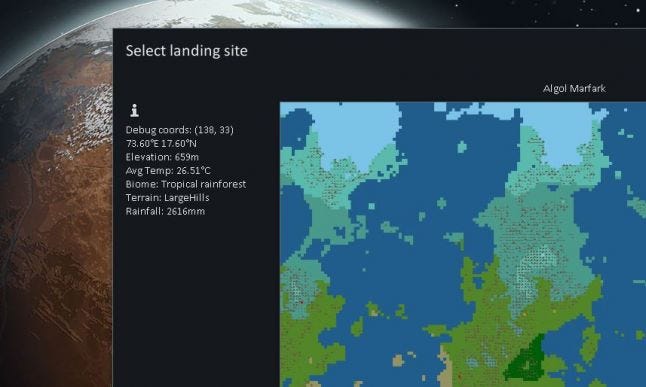 Currently in Early Access, RimWorld has had an overwhelmingly positive reception with players on Steam and has sold over 150,000 copies on the service despite its higher-than-average price of $30.

Toeing the line of more niche game releases, RimWorld is an involved strategy game with thickly-layered elements powering each and every move a player makes.

RimWorld was clearly inspired in some ways by Dwarf Fortress, but it's reductive to say that it is a re-imagined and modernized version of that game. Yes, it draws heavy inspiration from the PC strategy classic, but it also attempts to improve upon some of Dwarf Fortress’ ideas to create a more modernized take on the wider management simulation genre. 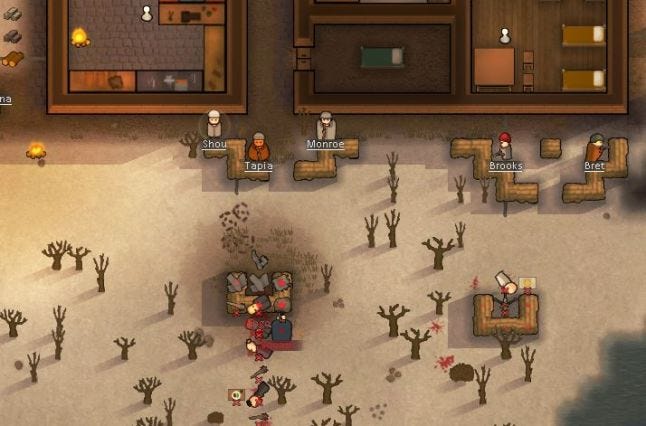 Considering his thoughts on the Simulation Dream, it’s unsurprising Sylvester is most drawn to Dwarf Fortress’ ideas and openness allowing for stories to develop organically.

“Dwarf Fortress amazed me because of the stories people wrote from it," he says. "I read generated tales like Boatmurdered and Gemclod and was fascinated by how the player and game could work together to create a narrative that actually worked,”

“I wanted to push that even further - and to do it in a way that's approachable, and without falling into some of the design traps that have, in my opinion, marred Dwarf Fortress.”

Dwarf Fortress is known for being a difficult-to-master sandbox simulation requiring a large time investment in order to fully comprehend its complexities.

In an attempt to make it more accessible, Sylvester has pared down some of the more layered ideas in Dwarf Fortress, but laments how it has the potential to affect any emergent narrative.

“Dwarf Fortress' abstract presentation leaves the player's mind to imagine the story from scratch, the same way your imagination paints a picture from words in a novel,” he says. “RimWorld is also abstract, but it shows enough that it constrains the imagination a little bit.”

The Dwarf Fortress influence is evident in RimWorld, but there are perceptible differences between the two. Set on a “dangerous distant planet,” RimWorld sports a more modernized take on the plains, mountains, and valleys, giving them depth and texture beyond mere flat colors.

Creatures, people, and structures have form and take up a more three-dimensional space on the map. Every survivor has a unique appearance and identity made up of technical strengths and weaknesses, familial bonds, and personality traits that may or may not come into play depending on what tasks they carry out.

Another differentiating factor is the AI Storyteller, an “algorithm that generates events from a categorized database, based on a few statistics about what's happening in the game.” It’s used as a way to introduce a random element into the gameplay of RimWorld and encourages more emergent stories to develop in tandem with the player’s actions.

There are small aspects to each character and piece of RimWorld that deliberately add story value to the experience, be it natural disasters or interpersonal conflicts. When they interact, the result is often compelling. Sylvester claims the best stories still come from interactions between these carefully tweaked systems. 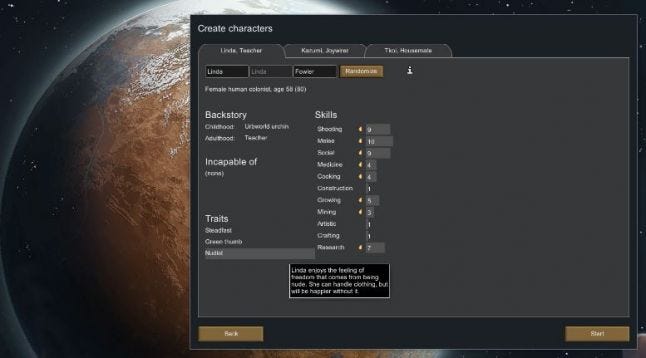 “The real engine of story is the gameplay systems themselves - the simplified characterization that tries to impact gameplay as much as possible, the small number of characters that tries to let the player get to know each one, the generation of family relationships to imbue cold mechanical interactions with deeper meaning in the player's mind,” he says.

“The game tries to hurt but not kill the colony,” Sylvester explains. “Raiders, when they win a battle, will steal or kidnap and leave, instead of killing everyone. When someone goes on a mental break, they do some damage, then recover. The storyteller eases off when the colony population drops."

"The goal here is to not just cut off the story, but let the spiral down into death play out over a long dramatic arc, or even be reversed. The process of losing is very dramatic, and I want to drag it out because drama is good."

“Also, I tried to design the incidents so they could interact and overlap," says Sylvester. "Toxic fallout lasts for days; fires burn slowly over time, raids can besiege the colony for days at a time. So what happens if traders arrive during a siege? Or manhunting animals go mad during a fire? The richness comes when several events interact, and making the events last a long time helps that happen as often as possible.”

The resulting narratives range from amusing to devastating. Sylvester points to one story in particular, recounted by Rock, Paper, Shotgun’s Brendan Caldwell, in which a young pop-star-turned-survivor is in a horrific accident, suffers a mental breakdown, and slowly turns into a deranged, ravaged monster. All of it happens while these different systems interact and react throughout the course of play. 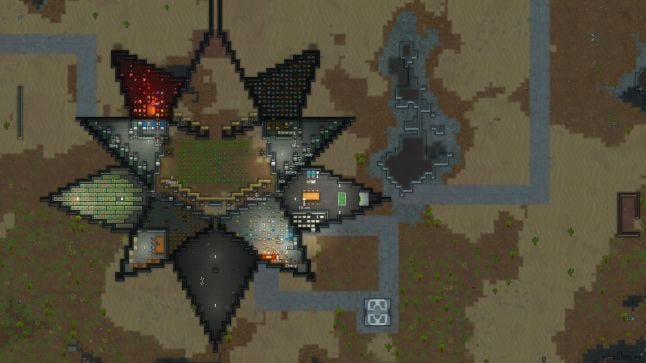 RimWorld is one powerful example of the ability games have to tell stories unique unto themselves, to utilize technology and structure as a means of creating a story instead of telling one in a linear fashion.