A brief dive into the secondary adventure mechanic of scavenger hunts shows how some titles, like 2018's God of War, create rewarding gameplay and replay-ability, and others are stuck in old outdated practices.
Adam Cohen
Blogger
October 11, 2019

Hi there, my name is Adam, I’m a Game Designer, let’s talk about Adventure Games.

When building an adventure game, side quests are critical to turn a linear experience into one of discovery and replayability. Without them, environments can easily blend into the background and become simmered down to their basic aesthetic themes and remembered by the player as little more than noise. To reinforce the potential depth of levels and make worlds feel lived in, mission designers utilize a versatile mechanic: Scavenger Hunts. 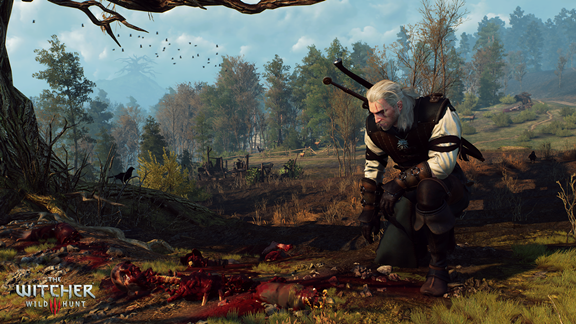 Titles like The Witcher 3 made great use of their expansive environment by adding tens of hours of hunting for armor sets and buried treasure. You really were able to take on the role of the character and is one of my favorite examples of a scavenger hunt.

What Is A Scavenger Hunt?

Scavenger hunts in games are pretty straightforward: the player is tasked with finding similarly themed hidden “drops” in the environment and rewarded with usable items as a result. The depth of clues vary, but the true location of each drop is a mystery, and acts as a challenge for players to tackle and break up their gameplay. While these quests share a common core idea, their implementations vary wildly between developers, with some devoting a large portion of their game's content to these systems.

Let's talk about Treasure Maps in God of War 2018 and Lucky Emblems in Kingdom Hearts 3 and how the former succeeds while the other falls flat. To start, Lucky Emblems.

Kingdom Hearts 3 (KH3) is a 2019 third person action-adventure which follows Sora and his friends as they explore worlds from Disney and other franchises, as Sora tries to grow in power for a final epic battle. The game takes you across several worlds, from the high tech San Fransokyo of Big Hero 6 to the living-toy world of Toy Story. 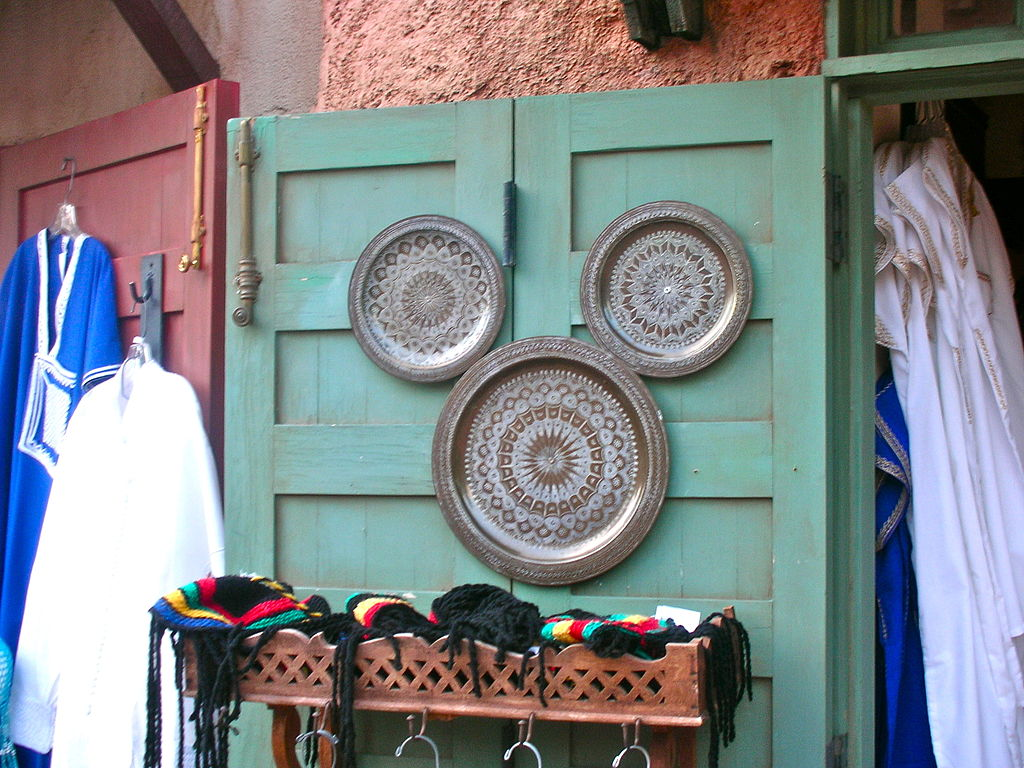 A Hidden Mickey found in Disney World Epcot’s Monaco. The plates are arranged to shape a “coincidental” image of the mouse’s famous silhouette.

KH3 uses a system called Lucky Emblems, a series of Mickey Mouse shaped imprints modeled after the Hidden Mickeys scattered throughout Disney parks. These emblems can be found almost anywhere, on top of buildings, behind signs, and even embedded in rocks. 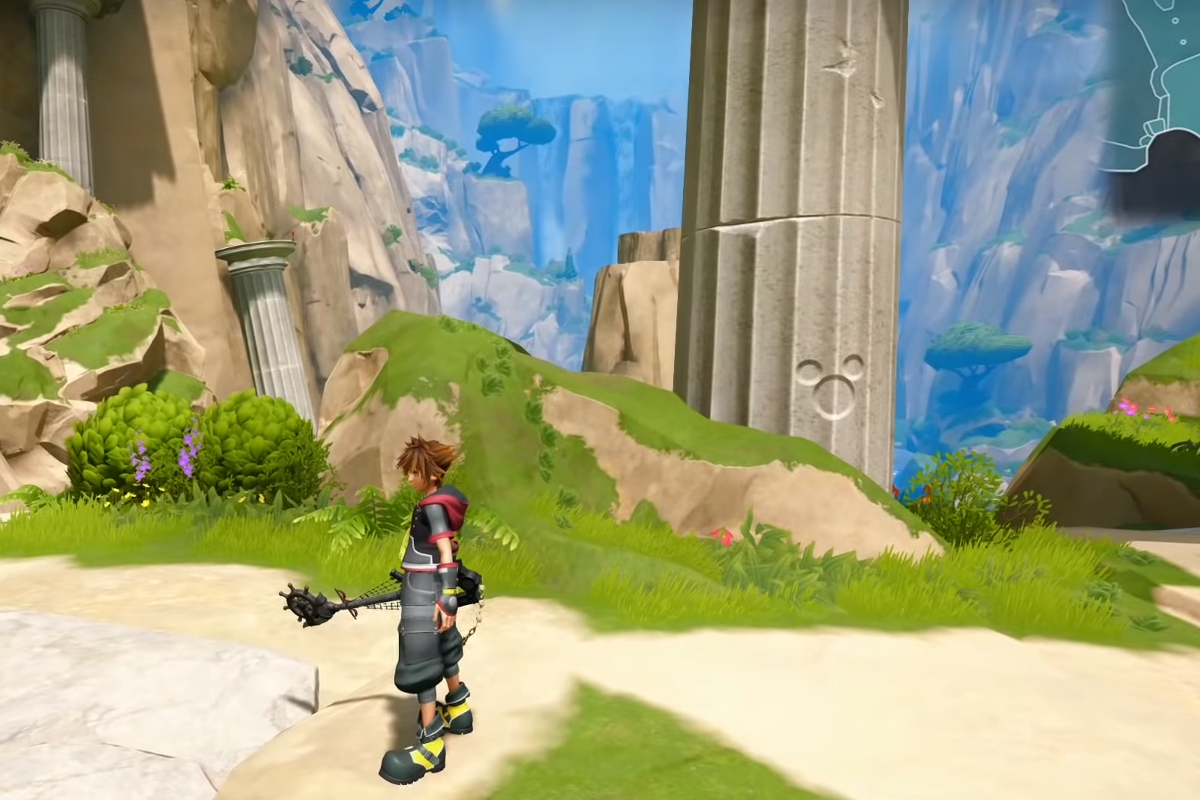 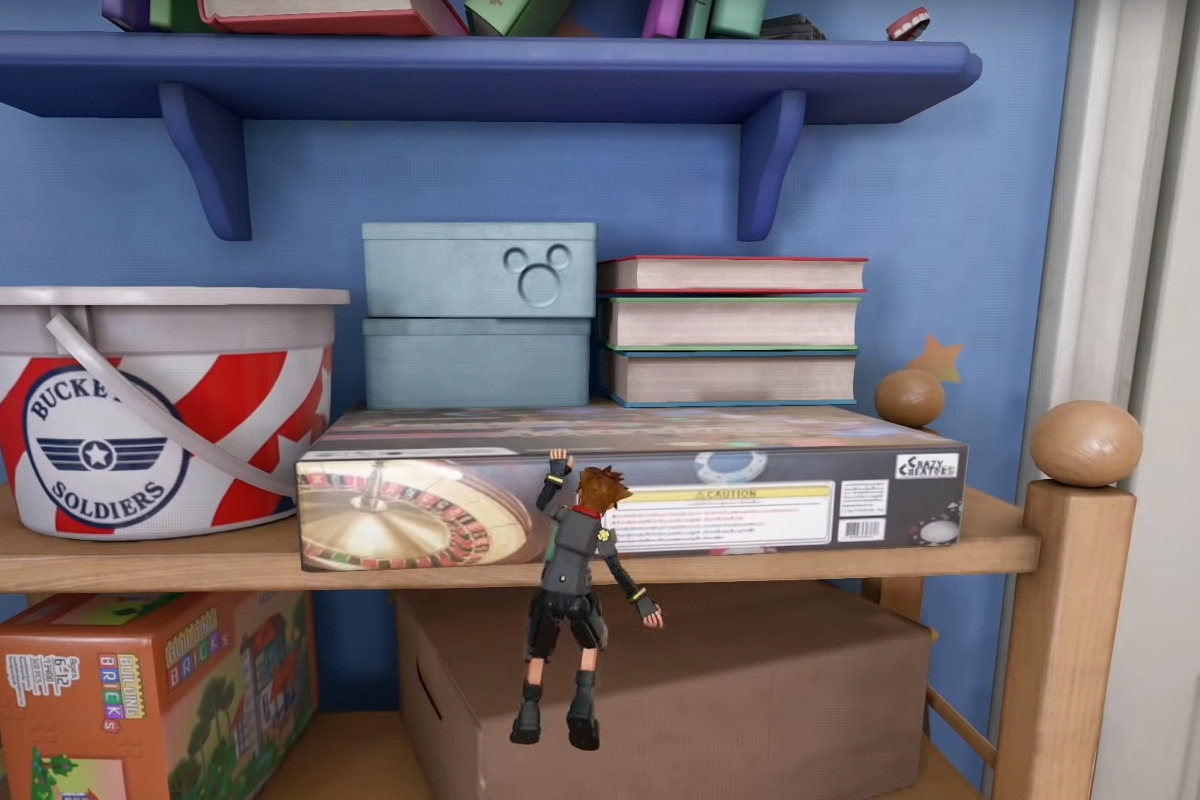 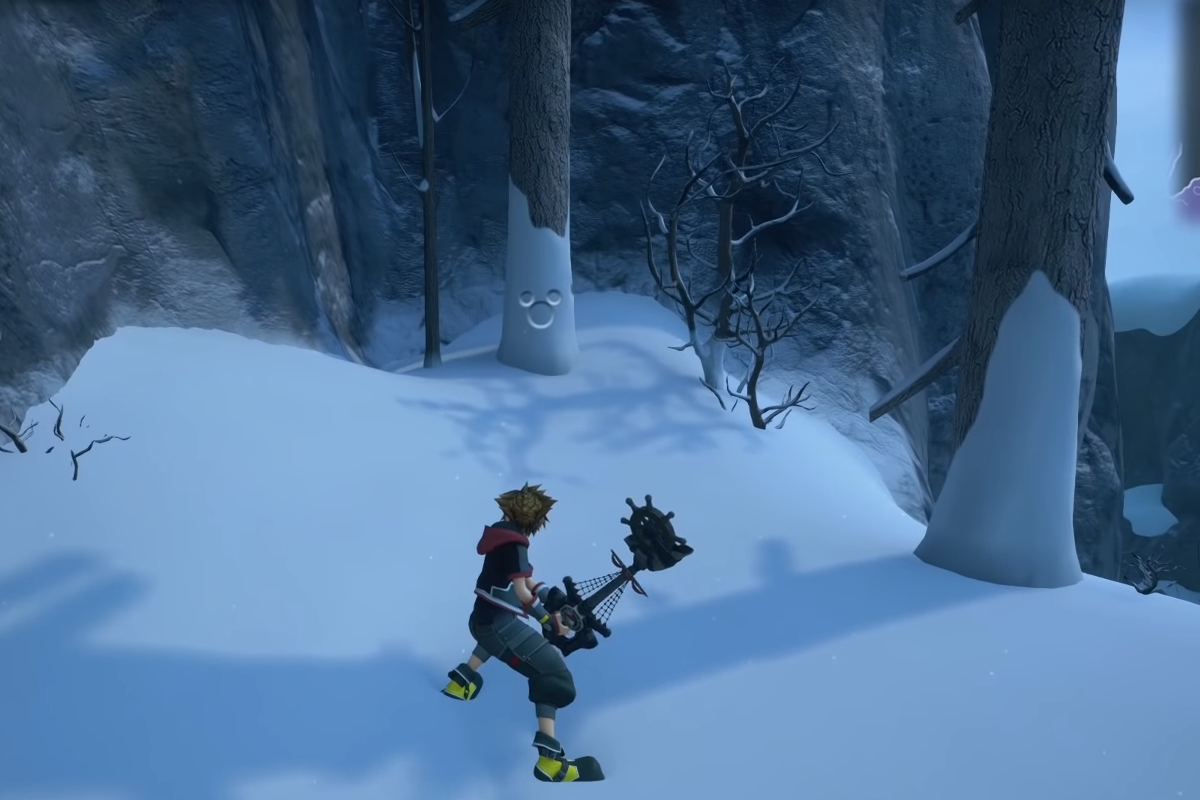 Unfortunately, what’s strange about these emblems is how out of place they tend to be. Their placement is, for the most part, random, and carries no lore connection, even somewhat confusing players engrossed in the series expansive story (one that is critical to its larger, long time fanbase). Beyond that, the rewards for obtaining them are, from the player’s perspective, random. The game rewards you with an item each time you find a certain number of items, milestones the developers chose to pace that progression. These items could have had some theming to them, but given how the system is designed (each lucky emblem adds towards a total accumulated value regardless of where they’re from) those themes would easily get lost. 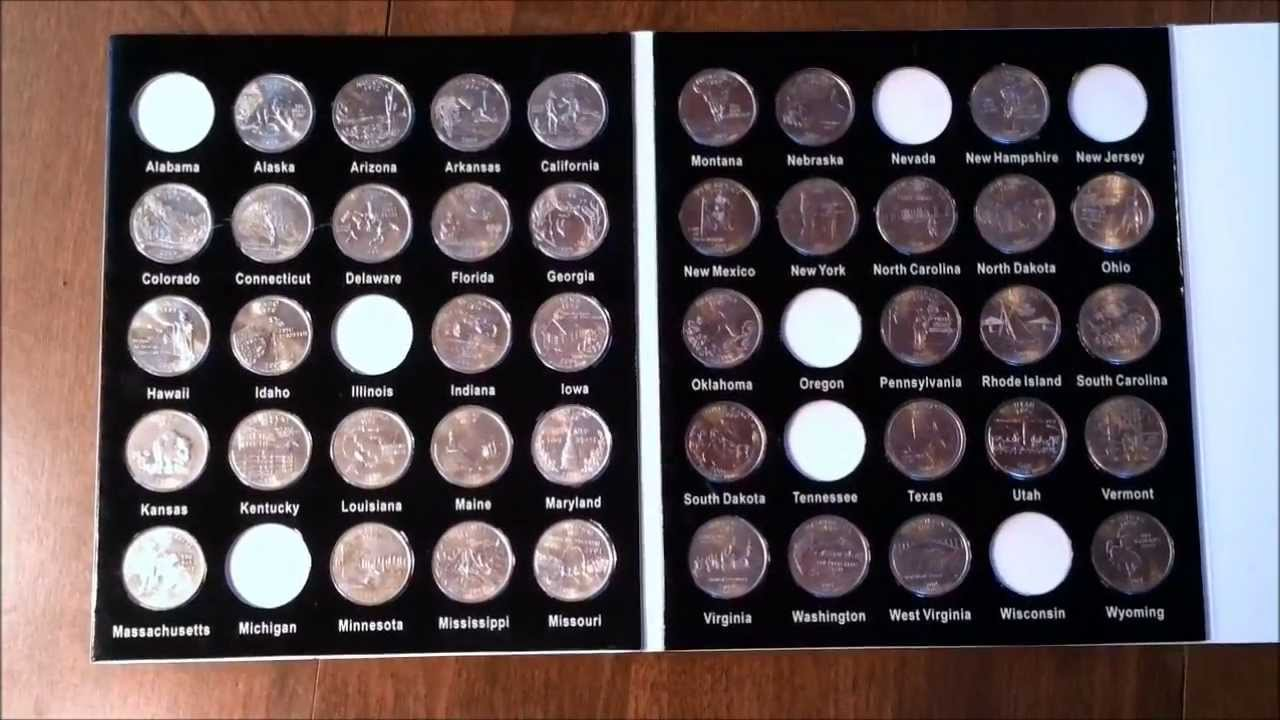 Quarter collection is a real-world equivalent to Lucky Emblems, and represents a random system of reward. You don’t find these quarters through skill or expertise but by chance. How is that supposed to feel good to players?

Now Kingdom Hearts does have lore based collectibles, in the form of Secret Reports, an item the player can find that, frustratingly, has no actual in-game reward beyond a completionist sense of accomplishment.

Misuse of Scavenger Hunts breaks the illusion and makes it clear that this system exists purely to pad out game time. Kingdom Hearts 3 is not the only game guilty of this crime but acts as a great example of what not to do: making collectibles single purpose (lore or useable items), or creating incredibly gamey systems. To shift to a more positive note, let's talk about the Treasure Hunt system found in God of War and why it does a fantastic job of expanding the game.

God of War is a 2018 third person action-adventure which follows Kratos and his son Atreus as they journey from their forest home in order to release the ashes of Atreus’ mother. The game takes you across several realms of existence, from the mystical, pinkish riverscapes of Alfheim, to the frigid and deadly chills of Niflheim.

God of War uses a system of Treasure Maps, where the player can find a small drawing of a location, accompanied by a piece of lore and immediately noted as a quest in their journal. This allows players to delineate between flavor text and actionable opportunities in the game world. 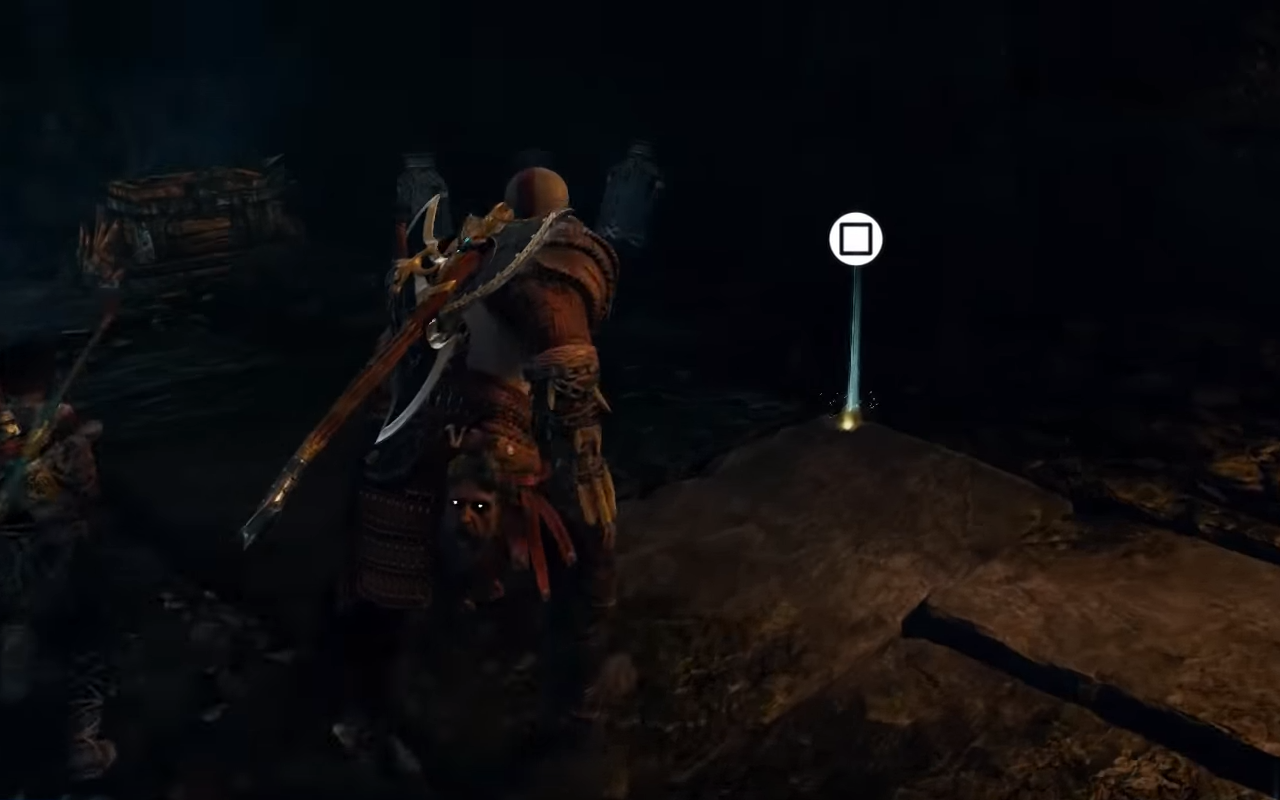 The player explores an environment, in this case The Witch’s Caverns, and finds a glowing icon with a button prompt.

Upon Clicking on it, Atreus notes its significance, a map leading to buried treasure. The game treats it as a moment in the journey, as real and significant.

“Where the leaves are red, and the moss is green, I buried my treasure where the Tortoise doth dream”

The game gives you a visual reference in a black and white drawing and a clue left behind by the person who buried it. It creates easily digestible stories when you find these: In this case, something as simple as someone hiding a prized possession. In others, the complex realities of the kingdoms that existed years before we set foot here. It is, essentially, a quest marker, but a clever one. It gives you enough information that at any point in the game, the player can decide to participate in the experience and have the full breadth of context without impeding on the challenge of the hunt itself. As a player, I can decide if these rewards are important to me at this time, and if so, choose to partake in the quest. While I’m just mentioning Treasure Maps (my favorite collectible), these philosophies also extend to all of God of War’s other collectible content, from the Jotnar Shrines which are actually translatable, to the Odin Ravens, which both hint at the overarching presence of the new trilogy’s big bad And help highlight just how far his reach goes. They’re not just a neat thing to check off, they help sell you on the world. 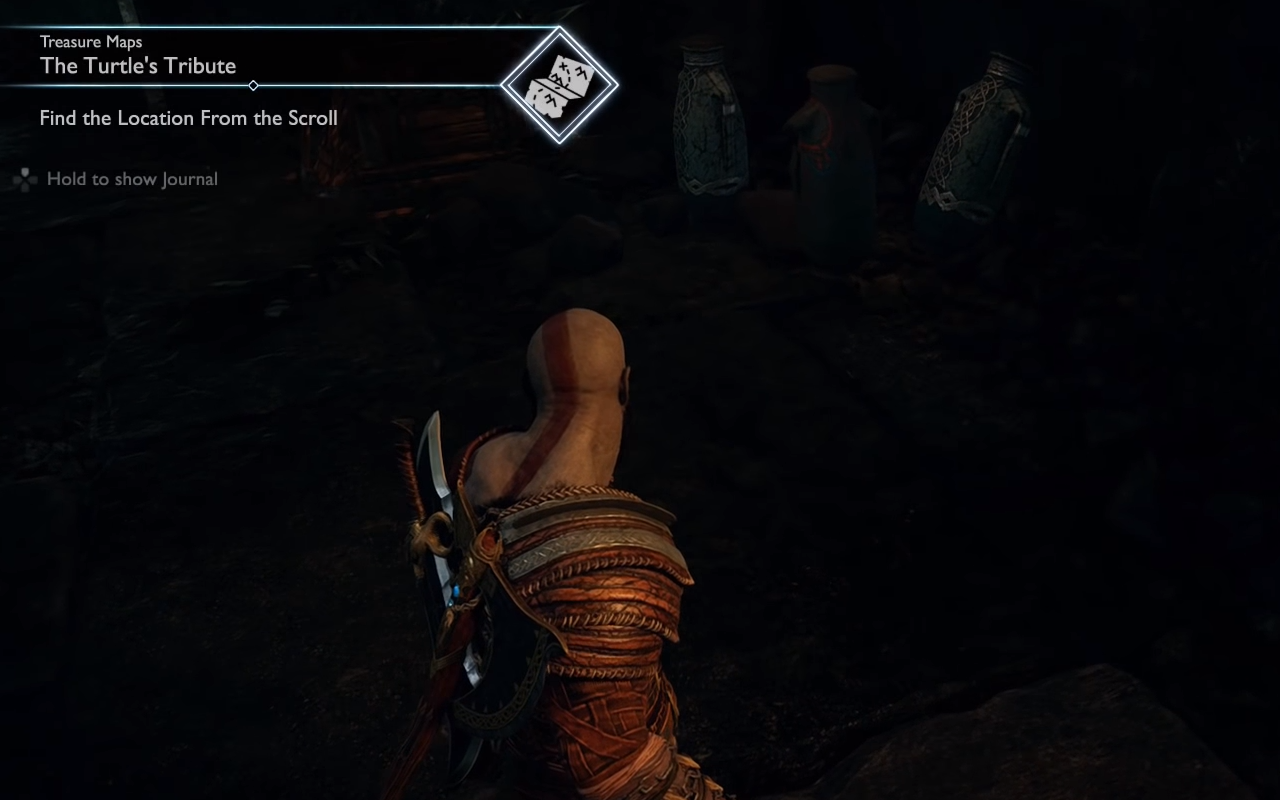 The final piece, and one of the most significant, is how the game gives you a breakdown of the reward for this journey. Not some arbitrary coin collecting UI booklet, but a genuine objective with a distinct beginning and end, that allows players to feel that every small step can count. You know exactly what you’re getting into and what rewards you’ll get for your efforts. As a player I can decide if these rewards are important to me at this time, and if so, choose to partake in it.

All of this adds up to making for one of my favorite adventure titles of 2018, and maybe one of my favorite games of all time. It shows deliberate thought and synergy between mission design, world design, and player agency. It’s important to remember that players don’t have hundreds of hours to play a game in a single sitting, and making sure that each time they walk away, they should be able to feel some sense of accomplishment.

Despite the significant tonal differences in their narratives, the idea of exploring worlds and going on grand adventures is consistent between the two games. Both games invite the player  to explore each new world and learn more about the history and tribulations of them, a developer’s best chance of selling depth to the player. Each franchise is, in its own way, historic, and was ripe for a fresh direction. God of War took a significant plunge by rebuilding the game’s model from the ground up, and Kingdom Hearts had about 10 years of philosophical changes in its lead designers to make similar shifts. I mention this because it’s important to note a common misconception: one game in a franchise does not dictate how the rest should be and feel like.

Adventure games live and die by the depth of their world, and God of War has set a new gold standard of what makes a world alive. I’m excited that Kingdom Hearts finished its first major epic this past year, and that God of War is beginning a new journey in the right direction, two franchises that I can look forward to for years to come. Hopefully other games will take a note of that, and decide sometimes it's okay to know what lies around the bend.

Nothing is ever designed in a vacuum and, in that spirit, I would love to hear your thoughts. Feel free to comment or email me with any concerns, questions or criticisms. Happy dev'ing.