Game Dev Digest Issue #83 - How and Why. The latest from the free weekly Unity3d/gamedev newsletter.
Mike Marrone
Blogger
February 26, 2021 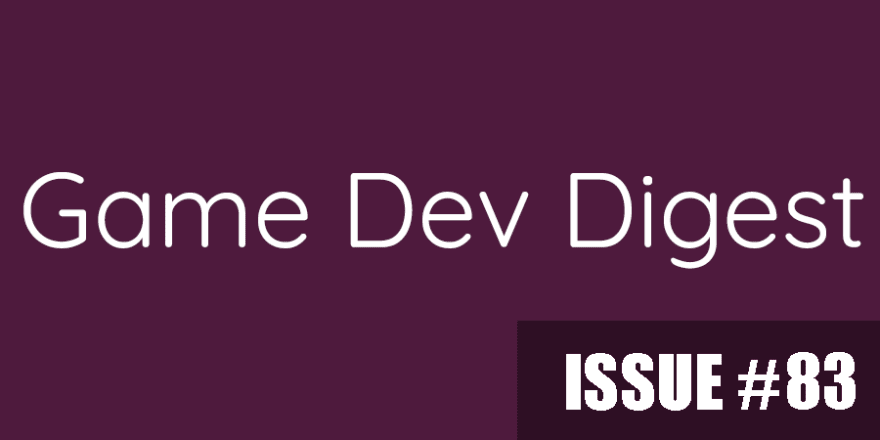 This week's issue is a little more philosophical with the how and why behind designing a game. Once you've read that, there is of course more great content on the implementation side and some great deals and assets at the end to get you started. Good luck out there!

Why do video games matter? 20 books every player should read - Why do we play? How do games work? From games philosophy to sci-fi, here are 20 delightful and essential reads for gamers
Keith Stuart

Companions & Creating Player Bonds - In this article, I'm turning my back on the main protagonists who usually bask in the limelight of our stories and our conversations. Because today I'm going to talk about the video game characters hidden in the shadows of the heroes, yet always at our side when we need them: Companions.
Natalie Mikkelson

"But How Do I Actually Start?" Making Games on Your Own as an Engineer - [also read the Hacker News discussion]
blog.eyas.sh

Using Unity's New 2D Animation Package for Traditional Sprite Animation - The components and ideas introduced in the package significantly change the 2D animation workflow in a way that makes working with 2D in Unity a lot more reasonable, and in some ways, I believe, fundamentally change how to do 2D in Unity for the better.
Kyle Kukshtel

Experimenting with Shader Graph: Doing more with less - You can improve the runtime efficiency of your shader without sacrificing the quality of your graphics by packing physically based rendering (PBR) material information into a single texture map and layering it into a compact shader. Check out this experiment.
Unity

Recreating the Drawing Mechanic from Half-Life: Alyx in Unity - Daniel Santalla explained how he set up the mechanic that allows the player to draw on a blackboard in VR and how it can be done with the glass surface similar to the effect in Half-Life: Alyx.
80.lv

C# Coding Guidelines & Practices - This repo highlights the list of software engineering guidelines in general. Most of these are industry-wide conventions, thus using them will ensure that your code is easily readable by people who are not you.
justinamiller

Fast Unit Testing for Unity Projects - In this tutorial, I’ll share with you a faster way of testing your code so you can spend more time bug fixing instead.
Neil Mark Corre 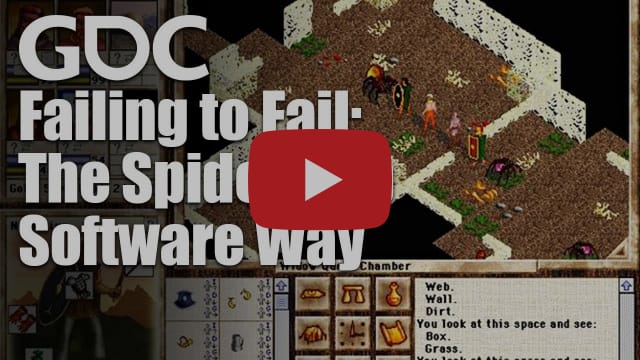 Failing to Fail: The Spiderweb Software Way - In this GDC 2018 talk, Spiderweb Software's Jeff Vogel presents a retrospective on his company's history and how they've managed to stay in the game-making business since 1994.
GDC

Game Development in 2021 - If you are looking for insights into the world of game development from 2020, and at greater trends going into 2021, the 2021 Game Development Report released by Unity is an invaluable resources. It looks at what types of games players are playing, how often and when they play, how they spend money, IAP or Ads and much much more. [Read the Unity blog post]
Gamefromscratch

Unity 2020.2 — New Features for Programmers - In this video we'll explore all of the new features in Unity 2020.2 that'll make your life easier as a programmer.
Infallible Code

DOOM ETERNAL BFG-9000 SHOT VFX in Unity - Doom Eternal is a massive-fps-demon-slaying game with so many cool visual effects. So after a poll to choose which VFX to recreate in Unity, the BFG-9000 shot effect was the chosen one! And I made a tutorial about it too! Enjoy!
Gabriel Aguiar Prod.

Blade Grass! Generate and Bake a Field Mesh Using a Compute Shader | Game Dev Tutorial - Grass is one of those things most games need, but is really difficult to get right! In this video, I return to grass to try to conquer it! I lay the groundwork here, using a compute shader to generate blades of grass in a mesh, while randomizing and animating it in a graphics shader. I also try out level of detail to speed up rendering.
Ned Makes Games 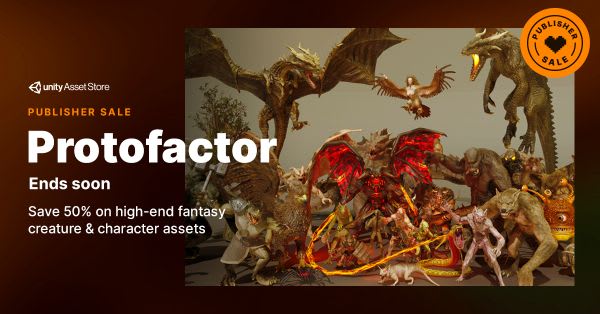 PROTOFACTOR, Inc is a 3D Art Studio based in Southern California specialized in creating royalty free higher end animated 3D models for the video game industry. They have an extensive library of more than 200 products related to Science Fiction, horror or Heroic Fantasy genres and some of their packs include up to 30 models making them a very advantageous solution for developers on a budget.

Free Asset Promotion:
In addition, the Demon Dog asset will be offered for free during the sale (Use coupon code
!
Unity Affiliate

UModeler Lite - UModeler Lite gives you a chance to try core features of UModeler for free. UModeler provides you with the best convenient environment for 3D modeling and prototyping within Unity.
Unity Affiliate

Free After Effects Glitch Template - You can’t have enough After Effects glitch templates, so here is another one from Videolancer. This template was previously sold on Videohive but now is available for free on his Youtube channel.
videomark.net

Ken Shape - Draw in 2D, set the depth for each pixel and generate 3D models!
kenney.nl

ParrelSync - ParrelSync is a Unity editor extension that allows users to test multiplayer gameplay without building the project by having another Unity editor window opened and mirror the changes from the original project. Test project changes on clients and server within seconds - both in editor
VeriorPies Open Source

Entitas - The Entity Component System Framework for C# and Unity. - [Now FREE!] Entitas is a super fast Entity Component System Framework (ECS) specifically made for C# and Unity. Internal caching and blazing fast component access makes it second to none. Several design decisions have been made to work optimal in a garbage collected environment and to go easy on the garbage collector. Entitas comes with an optional code generator which radically reduces the amount of code you have to write and makes your code read like well written prose. [read the blog post]
Simon Schmid Affiliate

A Minimal FSM for Unity - Finite-state machines (FSMs) are an effective way to structure your code. They’re popular in the world of game development. We often use them when developing character controllers, among other things. [jump straight to the code on github]
bronsonzgeb.com Open Source

Inkarnate - Bring entire worlds, continents and huge empires to life with our World Style. Lots of different art and biomes to choose from for your world!
inkarnate.com

Augmented Reality - Generate a 3D model that looks like you - Highavenue is a mobile app that takes three photographs of a user as an input; namely, a selfie, a T-pose, and a sideways T pose, to generate a 3D model similar to that of the user using multiple Machine learning technologies. [also read the Hacker News discussion]
Highavenue 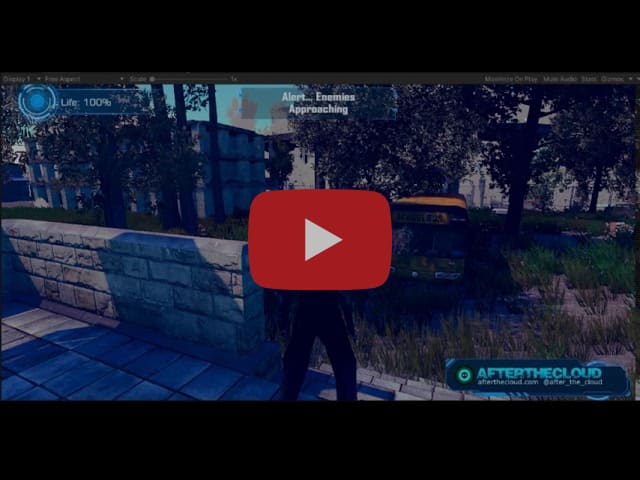 After The Cloud - After a pandemic decimated the world, destroying businesses and governments, conflict, hatred and fear increased year after year. A new World War began – people had had enough of the fighting and arguments and wanted an end to it all.
After The Cloud