Despite having played fewer games than I'd have liked over the past 12 months, I've somehow managed to sample more than five. That means it's finally time for my 2019 round-up. Jerry, hit the lights!
Chris Kerr
News Editor
December 28, 2019

Another year, another list. I’ll be honest, I can’t quite figure out whether 2019 has flown by, or been unfathomably long. It seems like a lifetime since Apex Legends burst onto the scene back in February (hint: that name will be reappearing again shortly), mainly because so much has happened over the past 12 months.

In the world of games, we’ve seen Google Stadia come (and sorta fizzle out), Microsoft officially unveil its next home console, Sony dish the dirt on the inevitable PlayStation 5, Valve break the space time continuum with the announcement of Half-Life: Alyx, House House briefly take over the world with help from a very bad goose, Apple throw its hat into the 'Netflix of Games' ring with Apple Arcade, and that’s really just the tip of the iceberg.

Looking back, it feels like I’ve exhausted so much energy trying to stay in the loop, I forgot to actually, y’know, play any of the amazing games you’ve all been gushing about. There are still far too many titles on my to-play list than I’d like to admit (apologies to Control, Jedi: Fallen Order, Untitled Goose Game, and Pokemon), and I'm sure some of them would've made this list in another life.

Alas, you've got to be in it to win it, and when I did find the time to dip my toes into the cool, refreshing video game waters, these five titles are the ones that stood head and shoulders above the rest. Some are immensely popular, others are absolutely barmy, and one particularly entry shares more in common with a psychedelic than it does a game. All of them, though, are bloody wonderful, so grab a warm cup of cocoa, nestle down, and have a saunter through my year in games.

You’d rightly expect a new romp from the folks behind Titanfall 2 to be a proper corker, but Apex managed to surpass those lofty expectations by delivering a free-to-play experience that was accessible enough to draw players in (an absolute must in a market dominated by Fortnite) and deep enough to keep them coming back.

Moment-to-moment gameplay is tight, tense, and tactical. Skirmishes never feel comfortable, and even when you’re decked out to the nines with shields, guns, and grenades you can still be undone by an intelligent team that works together. That focus on teamwork is made evident by Respawn's inclusion of an intuitive 'Ping' system that lets players communicate quickly and effectively with the tap of a button. It’s basically the chef’s kiss of features. 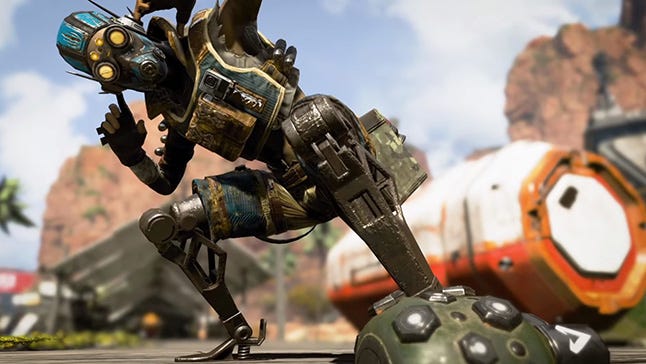 The shooting is also impeccable, and (a few early hiccups aside) everything feels perfectly balanced. I can’t recall a time I’ve been killed unfairly, unless you consider being gunned down while you scoff a sandwich unjust (which I definitely do). Each weapon looks the part, feels weighty, and sounds thunderous, and there’s enough variety for folks to spice up their play-style when the mood strikes. It’s the same story with character abilities, and there isn’t a member of the Apex roster that feels surplus to requirements.

Apex feels unashamedly deliberate. It seems apparently that each design decision Respawn made was in service of that core mantra of 'cooperation and experimentation,' allowing the shooter to carve out a niche in a hostile market that’s proven incredibly tough to crack.

Mini Motorways is a paradox of biblical proportions. On the surface, it’s a twee pastel puzzler about helping colorful cars chunter from A to B, but dig a little bit deeper and you’ll find a medieval torture device of a title that frustrates with devilish glee.

To be clear, Mini Motorways won’t drive you up the wall because it’s poorly designed. Quite the opposite in fact: everything about Dinosaur Polo Club's motorway masterpiece is caked in showroom shine. From the deceptively sweet visuals that ooze minimalist roadmap realness to the intuitive touch controls, everything here works -- and works wonderfully well. 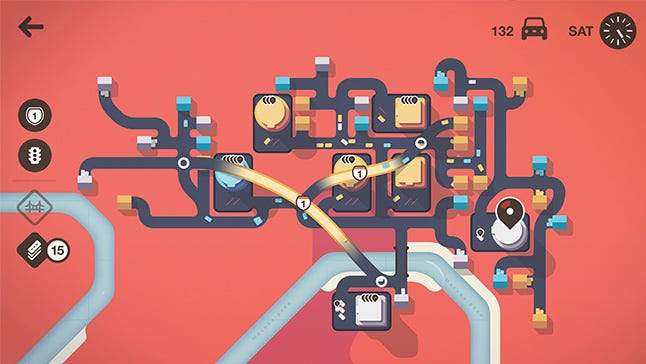 No, my real issue with Mini Motorways is how it highlights my own shortcomings. No matter how hard I try, I can’t stop the city from descending into vehicular chaos. My best laid plans are constantly being usurped by congestion, questionable traffic light placement, and a distinct lack of bridges. It doesn’t matter how well proceedings start, or how long my golden era of traffic management lasts, because sooner or later I know it’s going to come crashing down.

That, though, is the beauty of Mini Motorways. Because even though I know my thoroughfare empire won’t last forever, each failed attempt teaches me a valuable lesson and entices me back for another stab. Maybe this time I’ll build something that stands the test of time for a few minutes longer, letting me help a few more automobiles reach their randomly selected destination. Maybe this time, things will be different...

Outer Wilds is one of those special games that comes around once or twice a generation. It’s an experience that feels like it was tailor made just for you, despite the fact you know its cathartic rays have probably zapped hundreds of thousands of players over the past year. 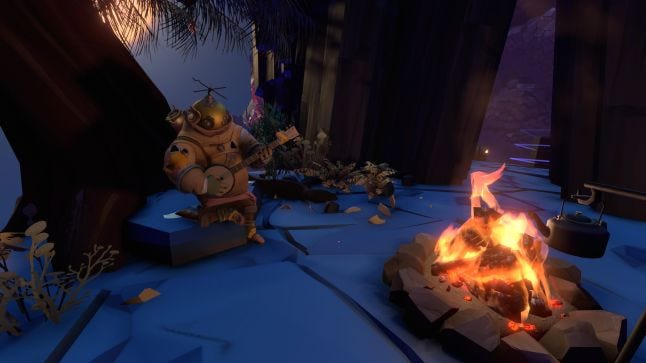 After being jettisoned towards the stars in the guise of a space-faring archeologist, players are tasked with exploring and understanding the inner-workings of a solar system shaped puzzle box teeming with mystery and wonder. Whether you’re hightailing it around the sun in your ramshackle spaceship, soaring across an ocean world dodging tornadoes, or plunging into the depths of a decaying planet being slowly consumed by a black hole, there’s barely a moment you won’t be either completely terrified, awestruck, or (more likely) a heady mixture of both.

It’s almost impossible to talk about Outer Wilds without giving too much away -- and trust me, you’ll want to go into this one relatively blind -- but for all of its narrative twists and turns, leaps into the quantum unknown, and abstract (read: genius) approach to puzzling, the game manages to stick the landing and then some. If you’re anything like me, you’ll be an emotional blob by the time the credits roll, but just remember: there’s nothing stopping you from doing it all over again.

What the Golf? by Triband

I’ve always been a bit miffed by golf. While I respect the skill required to punt a 1.5inch ball into an equally tiny hole what probably feels like a gazillion miles away, I just don’t get it. As a competitive sport it seems dull as dishwater, and in my humble opinion could use something of a facelift. 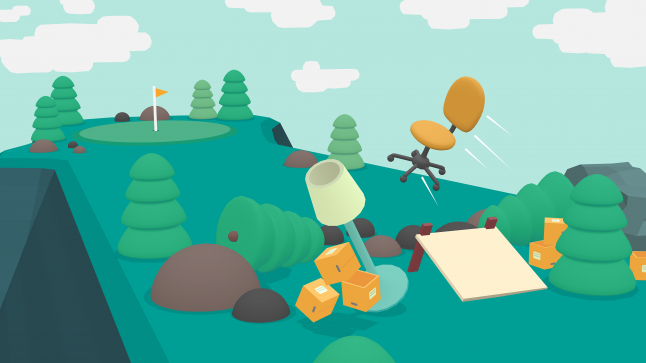 Thankfully, the good folks over at Triband seemed to agree and took it upon themselves to spruce things up a smidge with What the Golf?. An absurd physics-based golf parody, What the Golf? elevates the tired old concept of smashing balls into holes to hilarious new heights. Littered with bite-sized levels that riff on everything from video games and extreme sports to space exploration and home improvement, the nonsensical flinger will have you hurling houses, flinging felines, dodging bullets, and leaping across moving trains -- all in the name of golf.

It’s consistently funny (but also smart enough to ensure that no gag outstays its welcome), wickedly moreish, and surprisingly challenging. You might come for the laughs, but I guarantee you’ll be staying to collect all the stars and unlockables scattered throughout the zany flick-em-up.

How do you solve a problem like Manifold Garden? Well, sometimes you’ll need to manipulate gravity to turn a wall into a ceiling or a door into a drop, and other times you’ll have to step off a ledge into an infinitely repeating abyss so you can land 6,459 floors down.

Inspired by the works of M. C. Escher and specifically his lithograph print 'Relativity,' Manifold Garden plays like the lovechild of Portal and Inception, encouraging players to push a few simple rules to their absolute breaking point and manipulate the paradoxical world to their advantage. Often flummoxing but never unfair, the only times you’ll get stuck are when you haven’t quite dreamed big enough. 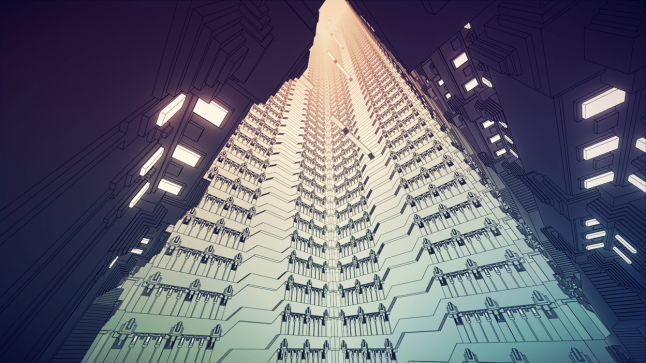 After close to an hour with the first-person puzzler I found myself looking at the 3D space in a whole new way, and it was liberating. I became a God within my own vacant universe, changing the rules of play on a whim and launching myself into the void without hesitation. When Manifold Garden clicks, it feels more like a slice of interactive art that a game -- tearing you away from reality into a parallel space where challenging the impossible is the only way forward.