2019 is upon us! Good lord what a tumultuous year it's been. We gave a sad goodbye to some stellar studios, saw some proper accounting for the impact of sexual harassment in the game development workplace, and had constant conversation about how game workers can improve their lot in an industry that can call for intense work conditions.

Amidst all the challenges, a lot of great developers put out some seriously great games this year, and we're getting a lot of chances at Gamasutra to celebrate them this week. Today, here's some of the games that your humble contributing editor/video producer has truly enjoyed in 2018. 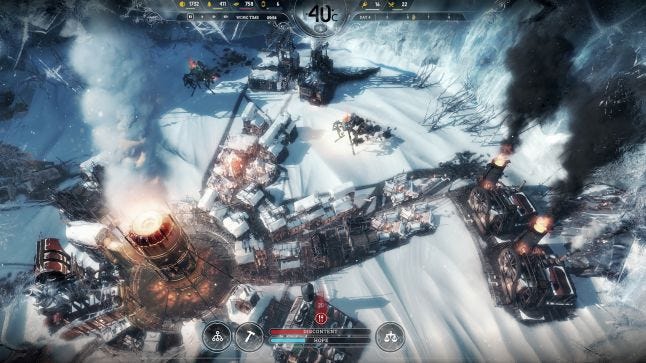 11-Bit Studios' Frostpunk was the 2018 game I could never stop thinking about. From the moment my poor survivors reached the totemic Generator sitting in the frozen Arctic north, every decision I spent with this society simulator helped me reckon with the demons of authoritarianism and how much control and the lies you can tell yourself in the name of the greater good.

Frostpunk's thoughtful design means that it's not just an arbitrary moral messenger here to warn you of the woes of a police state or theocratic regime. It's crafted to guide you on a path of different path of pain points to remind you that just because you didn't commit higher crimes against freedom, your lesser decisions still infringed on the rights of your people. And as the pressure drops, and your city is freed from the frozen snow in a great sigh of relief, you'll look at it's become and see how even its physical shape was impacted by how much you'd give up in the name of survival. 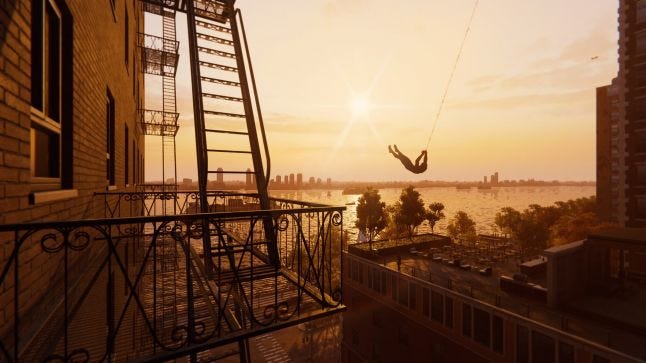 Marvel's Spider-Man is just one emotional pit stop for the web-headed hero who's had a hell of a 2018. He gave his life in the film Infinity War, he's reframing his own heroic origins in Spider-Man: Into the Spider-Verse, and when given a shot, Insomniac Games doesn't waste any time when granted use of one of the biggest icons in pop culture.

Not only does Marvel's Spider-Man give breath to a dizzying and dynamic traversal system that takes advantage of New York's iconic architecture, Insomniac also uses its mission design and gadget expertise to weave a narrative about the struggles of Peter Parker, and how his selfless nature and faith in other people can be used against him.

But it's still not a cynical game! It's quippy, it's cute and it gives Mary-Jane Watson something to do. If superheroes are becoming the modern-day mythological heroes, it's great that Insomniac Games injects a meaningful experience in the middle of its well-honed, well-polished technical achievement. 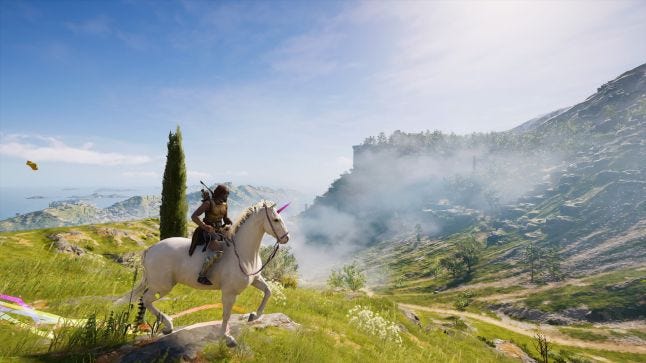 Speaking of mythological heroes, Assassin's Creed Odyssey lands on this list for doing its incredible simulation of the ancient Greek World. It's a massive credit to the world artists the modelers, the architects, and the designers at Ubisoft around the world, who take the Ubisoft open-world model and create a compelling, colorful experience out of it.

It's a land where wandering away from the main quest takes you to a gorgeous mountain-top that's not just a skybox, but has its own small secrets for you to dig up. Its side quests often go beyond just being part of a to-do list, rather show how vibrant, saucy, and overdramatic the Greek world could be sometimes. It's a history lesson in sex, drunkenness, and adventure, interested in human messiness, not just shiny macguffin baubles. 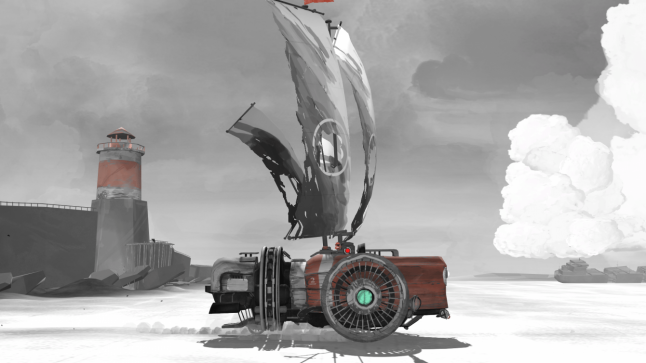 A lot of games on this celebrate the layering of intricate systems that create flashy and dynamic experiences when they all sync together just right. FAR: Lone Sails, is not one of those games. It's a slow, lonely push across an apocalyptic landscape that moves at a snail's pace, letting you manage the individual components that push your dilapidated land boat forward. And it's just the right kind of slowness and sadness to stand out in 2018.
Okomotive made this game after realizing their student project might just be worth putting out into the broader world, and the company deserves congratulations for making something so polished and thoughtful that it can affect such an emotional attachment to an inanimate object that you learn so much about. 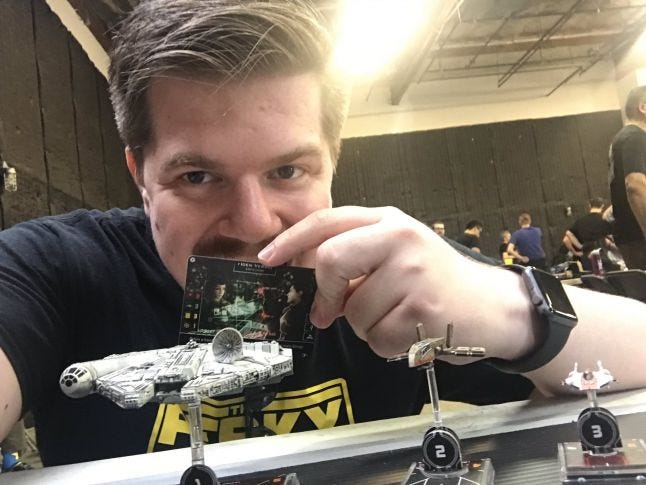 Yup, X-Wing Miniatures joins my list again. But for good reason! I spent much of my gaming time this year anticipating and exploring Fantasy Flight's 2.0 conversion of the tabletop wargame, and it's incredible how the Minnesota-based company managed to perform a core-rule revamp that supported veteran players and created space for new ones to join the game.

Fantasy Flight's choice to not only effectively port their 2012 to a new ruleset and dip their toes into the waters of app-reliant games shows how the tabletop space is evolving and can find new ways to support players who've been collecting the product for years. More and more, game development evolves into game evolution, and X-Wing Miniatures 2.0 is a stellar example for games in 2018 that metamorphisized into something new. 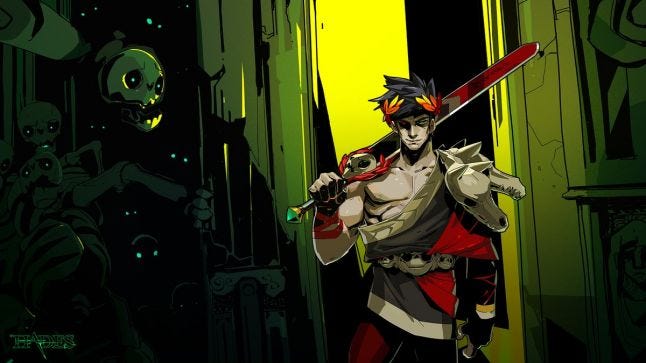 Supergiant Games' new hack-and-slash adventure has been out for only a couple of weeks and it's cemented itself into the pantheon of 2018. Not only does it show off Supergiant's traditional mastery over isometric combat (and some of the best gamefeel of 2018 goodness gracious), it's a fundamentally great foundation for its Early Access period. Years from now, when you're reading this evaluation of Hades, it will be a fundamentally different game and that's okay! But the promise of an experience that steadily improves this Greek myth family feud is a good promise to end 2018 with. 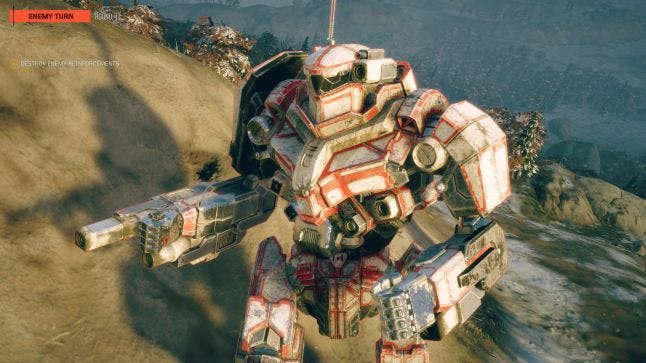 Look, I do love the stompy mech bois, I really do. I'd put any game in this list that had stompy mech bois. But stompy mech bois and the simulation of running my small mercenary company? That's the kind of role-playing experience only Harebrained Schemes can deliver. Worrying about finances, checking in with my crew members, carefully calculating fuel rates, all of these are the small moments that make that POP of a Mech blowing up just feel so good. 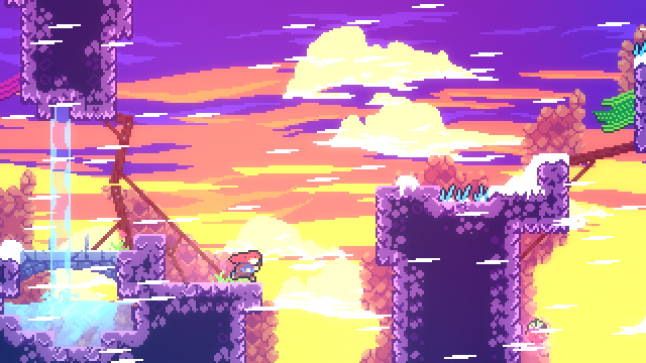 Celeste is a dang good rethinking of what platformers need to be when there are SO MANY OF THEM launching on Steam every week. In a design space that's dominated by hardcore thinking and trying to make every frame of movement matter, Celeste takes that entire philosophy and manages to make something meaningful happen with it. It's filled with clever challenges but doesn't get mad at you for screwing them up. It makes the struggle and exasperation a part of its story, and paints a perfect pastel painting of a Canadian mountain that can make your struggles manifest and give you something to conquer. 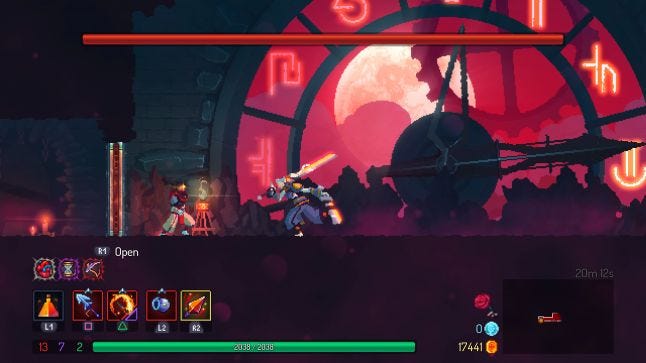 I genuinely didn't understand the appeal of roguelikes until I played Dead Cells. I also have complete 100% respect for how this game was made. As Sebastien Benard told us earlier this year, Dead Cells is a game that doesn't try to rely on perfectly simulated physics, but a design team's keen understanding of what players want to be a challenge, so it's not punishing you for making mistakes that aren't core to its central design. The layered weapons are fantastic, the color and character of its space is delightful, and even though it's nearly impossible to make it to the end, just picking it up and going for a 40-minute run feels so simple and easy it can't not be on this list. 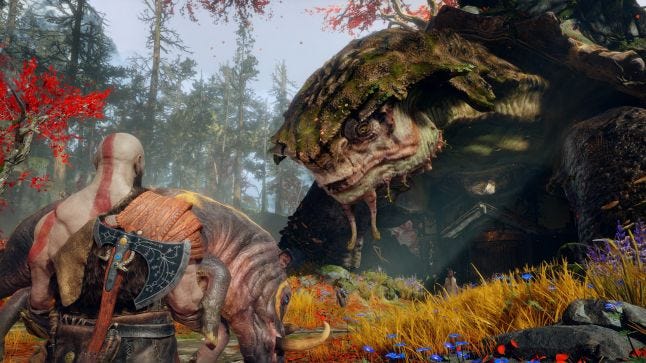 Look I never...understood God of War prior to this game. But Sony Santa Monica's soft reboot/northern migration for Kratos is a standout, polished experience that not only does a decent job adding a layer of sympathy and softness to the angry, lecherous video game hero, but it's also one of the year's most fascinating level design experiences. The tight combat and outstanding boss encounters make every little encounter just feel good (that axe!) but exploring Midgard and the many realms is a wondrous experience too.

You see, where previous God of War games might have just moved Kratos through different linear spaces, God of War moves the player back and forth across a self-contained world, softly unpeeling the traversable landscape like a Shrek-grade onion. The gradual revealing of spaces and uses of soft backtracking gives everything a sense of meaning and design that syncs up with a story set *after* many of the events in Norse mythology have taken place. It's artificial but intentional, an intersection of destiny, prophecy, and discovery that hasn't worked in a lot of other games, but helps make God of War's soak with a sense of purpose right down to the very act of exploration.