Continuation of the Postmortem of Filbert Fledgling.
Cathy Pyle
Blogger
February 09, 2010
Game Editor – Hammer Pixie:
Hammer Pixie, which was originally called Tilex, was written in such a way that multiple people could design completely different levels or entire sections of the game independently of each other.  This included testing and alteration of the AI code of the characters without fear of impacting other portions of the game being developed by others. This of course could only be done if a character and its AI code were not shared across levels.  It truly was a parallel development tool.
Hammer Pixie was and still may be the most extensive platform scroller game editor ever built.  It had everything from variable angled terrain, animated tile set functionality, terrain slope physics, and even event triggered audio with stereo panning and distance effects. 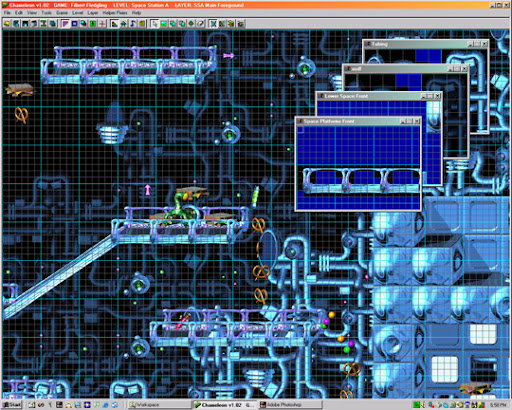 In order to facilitate the graphics pipeline to the editor, other tools had to be built.  Sprite Pixie, Tile Pixie, and Targa Pixie were these tools.
Tile Pixie allowed for the creation of extremely detailed isometric tile sets in 3D Studio and then converted into tiles and into finally files that Hammer Pixie and the Troll game engine could use. 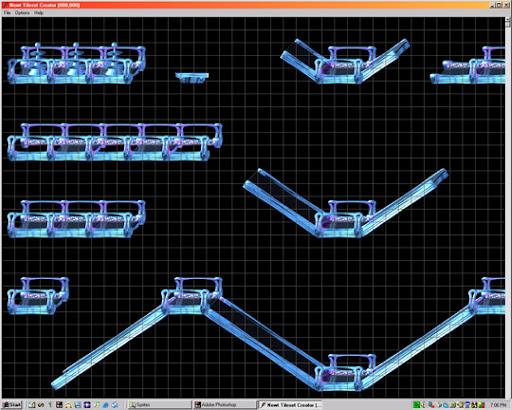 Sprite Pixie also allowed for the creation of characters in 3D Studio to be ported over to the game editor. 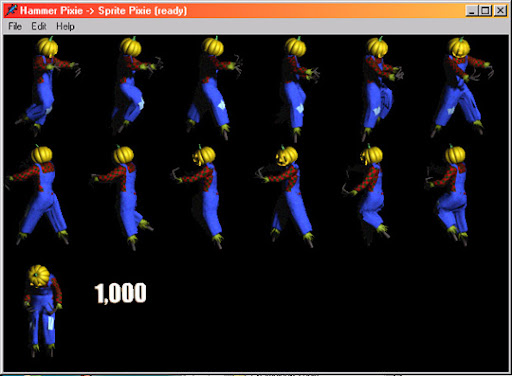 Targa Pixie was a small tool that converted Targa images to 16-bit BMP images used by both Tile Pixie and Sprite Pixie.  At the time Adobe or anyone else supported files with 16-bit BMP format though DirectX did.
Game Engine:
The Troll engine was another awesome breakthrough for us.  It was written in C with parts in assembly.  It used DirectX 7 even though DirectX 8 was available.  One of the goals we set out to do was to make an engine that could handle more layers of parallax than any other.  I am pretty certain we did that.  The engine was so fast even for the slow Celeron processors of the time that it had to be slowed down purposefully.  Even with all the layers of parallax, we were over running the frame rate by a great deal.  I believe that there are places in the game that range between 8-12 layers if you count the layer containing sprites and what not.  The game never dips below 6 layers.
The AI was also a great breakthrough for us.  It was designed in such a way that every character in the game was given a separate “brain” by having a dll associated with its sprite.  The brain would then be late-bound to the game engine when the sprite was invoked into existence.  By doing this it allowed for the code of an individual character to be changed and never affect the engine or other AI modules.  This was great for debugging.  Since the engine was frozen in development, the only thing that had to be debugged was the individual character brains.  This was a very sophisticated system for AI, but the possibilities it provided were endless and made the engine very polymorphic.
The audio portion of the engine was another awesome piece of code.  It was decided to have CD audio tracks instead of MIDI or Mp3s.  This promised the highest quality and the least amount of CPU cycles that the engine could use for AI and other stuff.  This made us develop the engine to be able to read mixed mode Orange Book (Red and Yellow Book) CD formats.  This portion was written in assembly since I had tons of experience with SCSI and IDE development.  This resulted in a soundtrack system with zero latency even when looping tracks.  At the time, other games including higher end games such as Descent would slightly pause or stutter game play when recycling a track.  The Troll engine did not. Even with all the graphics moving at full speed it never even hiccupped!
Graphics:
This was the first time that we had a Windows copy of 3D Studio Max.  I believe it was 1.2 or something like that.  It was super revolutionary relative the DOS versions.  We decided that if the game was to have CD quality audio, it should also have full length, full screen, cut scenes.  This told the story of Filbert throughout the game seamlessly tying the levels together in a continuous adventure.
As previously mentioned this game had all the tile sets, sprites, and cut scenes rendered too.  To our knowledge it is the first platform scroller to do this.
Audio:
Also as mentioned, the soundtracks were actual CD soundtracks.  The sound effects are all original and nothing to my knowledge is from outside sources.
You Tube - Video of Filbert Fledgling
Conclusion:
So to our knowledge the project was a technological achievement for us that even a large corporation would have been proud of.  We believe that Filbert Fledgling was and probably still is the largest platform scroller ever designed.  We also think it is the first fully rendered platform scroller ever built though Nintendo may have beat us, can’t say for sure.
Given that I was working full time and then coming home and developing Hammer Pixie, the Troll game engine and Filbert Fledgling till 3 AM each night.  I think a schedule of a year and four months of development for two guys and a musician wasn’t bad.