A brief summary of how the broader debate about women and videogames has influenced some of the design processes in Desktop Dungeons.
Rodain Joubert
Blogger
March 01, 2014

The following was originally posted on our QCF Design blog.

The broader debate of women in videogames needs no introduction, regardless of one’s stance on the matter. Everyone with an Internet connection and at least some investment in videogame culture has heard stories of the industry’s gender bias (which we’ll go ahead and assert is very readily apparent).

Now, Desktop Dungeons itself isn’t some haven of progressive social ideas and forward thinking. We didn’t start the game with an overarching agenda in that area – but during the course of development, we were heavily informed by the dialogues, rants and documentaries around the topic of female portrayal and how some games screw that up so badly.

The time at which we truly started ramping up our in-studio policy of awareness about DD females was at the beginning of the beta build, when we had the opportunity to reset a lot of things (in particular, our art style). But we also had to contend with two major problems: one, our work on visuals was usually tied in with coding priorities, particularly during the early dev cycle. Thinking about stuff was one matter, doing it was another.

Our second issue was that despite being strongly opinionated on these matters with a firm, feminism-friendly stance, the challenges we encountered in representing our women fairly and respectfully were numerous and rooted in some really deep-seated bias.

So what we ended up presenting was a product that had a mind to at least not completely screw up. In some parts.

Though Desktop Dungeons has always been gender neutral in its story and mechanics, it came out the door with a male-slanted art roster. For the freeware version, the entire character sheet was male, only accommodating women when third parties made custom tilesets available. And when the Beta came around, we only began work on active female representation after we’d already dealt with the male graphics as our norm.

This was an intimidating task. We already had a unique character portrait for every race and class combo in the game (as a rough estimate, that’s about 120 different pics). Adding females to the combinatorial mix instantly doubled that number and we were additionally burdened with the requirement of not doing things the simple and “acceptable” way.

Quite frankly, we wanted the women in DD’s universe to be adventurers first and runway models second. This adjustment turned out to be startlingly non-trivial – you’d think that a bunch of supposedly conscious, mindful individuals would instantly be able to nail a “good female look” (bonus points for having a woman on our crew, right?), but huge swathes of our artistic language tended to be informed by sexist and one-dimensional portrayals. We regularly surprised ourselves with how much we took for granted.

And it wasn’t good enough for us to simply react with deliberate ugliness or typically masculine factors – the idea was for Desktop Dungeons to remove the gender binary entirely instead of just making everyone a man. In de-emphasising sex as much as possible, we hoped that players would be able to enjoy a more gender agnostic environment in general. Some of our proudest mechanical tweaks involved removing notices and choices in particular areas. Male / female adventurer rolls were deliberately made random. Gender-neutral character names were popularised in places. On closer inspection, one may notice the remarkable similarity between the in-dungeon sprites of male and female elves. And we have some quiet thoughts about the fluid nature of our beloved Kingdom Taxidermist.Shorthands for the feminine kept crawling into our work when we weren’t paying attention – smooth skin, homogenised facial structures, evidence of makeup, you name it. Even characters who we thought would easily sidestep trouble (like the female wizard) simply looked like young, pretty women in grunge costume rather than hardboiled dungeoneers. Portraits for some species went through several drafts just to deprogram our subconscious idea of what felt normal and right.

In some of the more egregious cases, time and pressure still had us throwing up our hands and going with what was easiest for us with slightly disappointing results … like bringing in an entire cast of female goblins relying on secondary markers like eyelashes and lipstick. We also messed up pretty badly by whitewashing our cast (with the occasional blue-skinned Bloodmage, but that doesn’t really count). And for the most part, enemy rosters and main story characters still reflect a heavy male bias. Our only obviously female vicious-tier boss is identified primarily by her role as a matronly figure. And while DD largely averts the problem of the overall female body getting needless sexualisation, we’ve gotta admit that the Earthmother still looks rather “generically hot”. 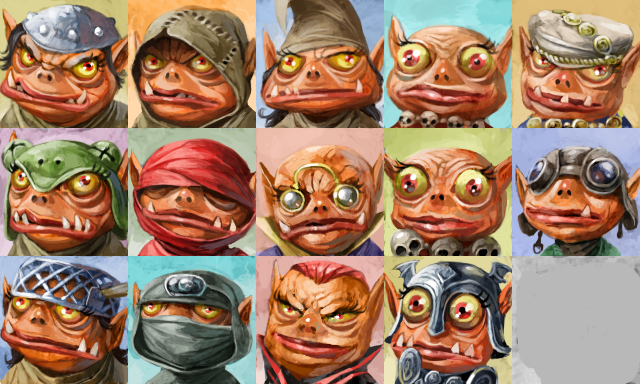 But we like to think that we did some good with what we tried, and our minor efforts – far less insightful and involved than most of the work done about gender in this industry – still managed to generate conversation and opened a few eyes from time to time, at least according to some of the feedback we've received.

If there’s one thing that we hope, it’s that our next game project will be more observant and inclusive from the very beginning, encompassing intersectional representation where possible and showing players that there’s always one more way to represent a complex group of people! It won't change the world by itself, but we want people to know that we're willing to contribute towards this long-due shift in videogaming's cultural narrative.