Feature stacking is often a great recipe for fun

In this article, I discuss (mainly) roguelike games and how they integrate mixing various systems and features to create layered and dynamic gameplay that proves well to be entertaining and long lasting.
Dan Williams
Blogger
June 20, 2017

I've been playing a lot of Caveblazers recently, and the dynamism of its gameplay elements prompted me to write a short history of my appreciation for what I call "feature stacking".

To describe it in the simplest of terms, feature stacking (to me) is where the player can accumulate various items or perks that affect and mutate gameplay on a layered level, and in most cases can be mixed and matched to achieve a robust system of play.

My first introduction to this concept at a very base level was being able to enable or disable the weapons in Super Metroid. In it, you are able to acquire 5 different kinds of weapons and can enable or disable them in the pause/status screen. The ice beam freezes enemies, the wave beam causes your shots to fly in, you guessed it, a wave, the spazer weapon spreads your shot out, the plasma weapon narrows and strengthens your shot, and the charge weapon lets you power up each one by holding down the shoot button. By enabling and disabling the weapon features, you can achieve different effects.

To me it seemed weird at the time that you'd want to turn OFF any weapon features, but since the spazer and plasma beams can't be enabled at the same time, the game hinted at some dynamism in your weapon configuration. It was a shock to me as a kid that I could actually turn them all off altogether and have my regular basic shot back.

My next introduction to this kind of setup was with Final Fantasy 6 and the Relic equipment. I was delighted and felt like I had somehow broken the game by equipping the Genji Glove (equip 2 weapons) and Offering (attack 4 times) relics, allowing my characters to attack 8 times in a row. 8 times! That's 7 more than the normal 1! I was a beast! Upon discovering this, I then went through all of the relics available and mixed and matched them, searching for other equally monumental revelations. Sadly, for my interests, the 8x attack would be the highlight of my discoveries even though the mimic attacks with magic are potentially more damaging. Final Fantasy 5 (unreleased in North America at the time) had added a lot of this feature stacking, but I hadn't played it yet. When I did though, the job system turned out great, although for my money, the 8x attack again was usually what I focused on. This time though, every team member could have this equipped instead of just one, so I could go each round attacking 32x and usually wiped most enemies away with it. All except for that stupid Shinryu boss.

Red Alert 2 was another game with a surprise sense of feature stacking (of sorts, anyway) where, if you played as the Allies, you could use your IFV unit and stuff any type of soldier into it and it would change the type of attack that the unit could do. A soldier unit would improve the gun to better kill infantry, an engineer allowed it to repair other vehicle units, and so on. To my surprise, I was able to load enemy soldier units into the vehicle as well and that opened up a new range of attacks including nuclear suicide bombers, Tesla soldiers, and radioactive tanks. The discovery of these newly combined effects was amazing, and I proceeded to again test every different combination to see what was the most fun or effective. Although you can't stack multiple infantry units into the same tank, the mixing and maching of the soldiers in a squad sort of achieve this effect. The below video (not me) explains how they each break down:

The next couple of games that I played that are heavy hitters for this are Risk of Rain and The Binding of Isaac. Spelunky preceded them, but I am choosing to highlight these two because of their explicit portrayal of feature stacking, whereas Spelunky is 1. more optional and 2. not the mechanic that makes the game stand out as much in my mind, since only a few combinations actually stack on each other by comparison.

Risk of Rain has a system where the items you collect augment a lot of your character's state, but not necessarily the core attacks that you control. There are modifiers that will let you hurt enemies when you touch them, fire homing missiles every time you attack, let you jump higher, steal health, etc, but a lot of the core combat remains the same. The item modifications almost always stack on each other, however, so by the end of the run you are typically a monumental killing machine with 20+ modifications set to your character. Your skills typically improve to help the core combat, but the wrapping around that help the feeling of the destruction greatly. 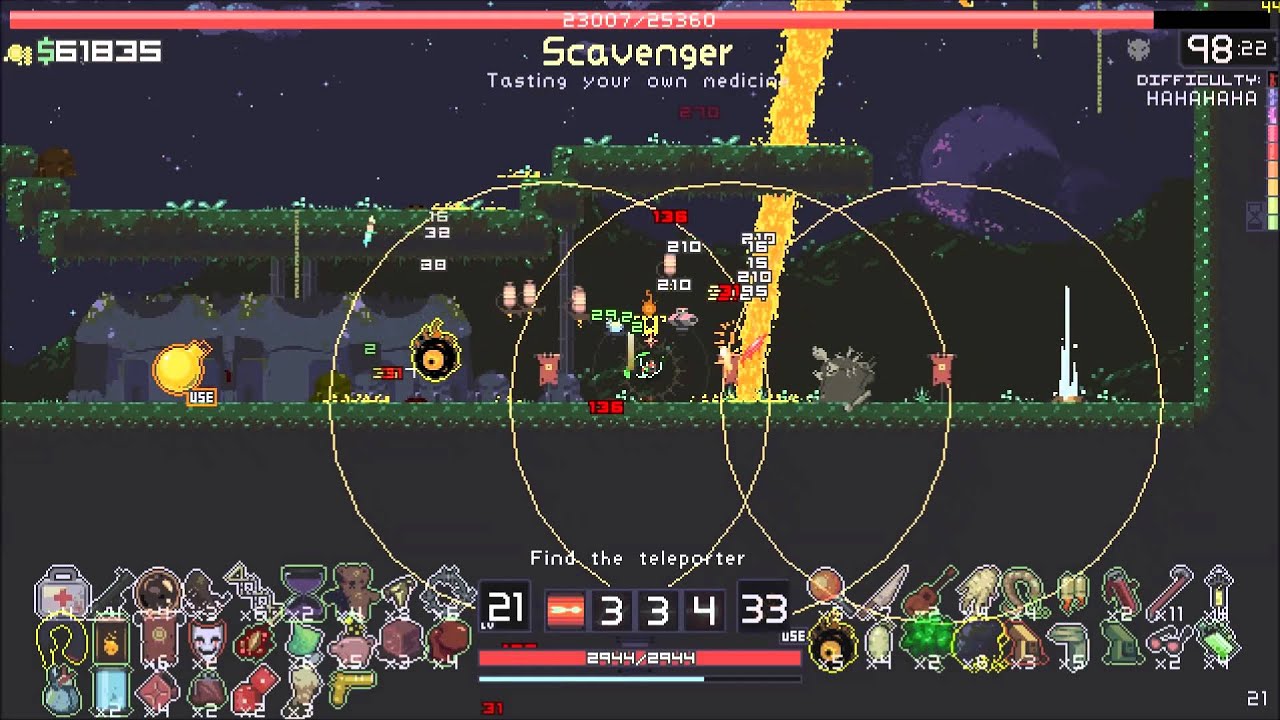 The Binding of Isaac is a 4-directional roguelike shooter and the items you collect alter your shots, movement, and so on in very dramatic ways. Since the game is a shooter, most of the modification goes into the behavior of the shots that you fire. The size, damage, direction, movement pattern, firing rate, weapon type, and more, are modified greatly in this game. For example: one time I acquired one item that allowed my shot to be turned into a beam, one item that allowed me to move the shot around the room with the right directional stick, and one item that made my shots fly in a circle. The stacked result was a "ring of death" that I was able to freely control around each room to both decimate the enemies and also form a protective ring around my character when the need arose. The attacks are often changed dramatically in BoI, which makes for incredibly fun and different playthroughs. The movement too is modified to allow for faster speeds, movement over spikes or gaps, and so on, but usually the focus is the modifications on the shooting.

What I think makes BoI and RoR stand out among others (aside from my hundreds of hours in each) is that for each of these modifications there is a graphical representation of it on your character at most times. BoI changes the art of the character to reflect bruises, syringes, smiles, tears, and so on, so that by the time of the end of the game, you are a grotesque version of your previous self with each modification causing some kind of deformity. RoR applies a lot of graphical flair AROUND your character: things like shields, target symbols, flickers of lights, colorful trails, and so on. The depiction of each of the modifiers is also displayed at the bottom of the screen so at any time you can mouse over them to see what they do. This makes for a great way to keep track of the modifications that you have collected.

The newest game with this kind of implementation that I've been playing is what I addressed in my first paragraph: Caveblazers. Caveblazers seems to be taking more of the RoR approach by letting you collect blessings and items that augment your state, but don't really augment your combat directly as much. There are some graphical representations of the modifications, but most can be found in the inventory screen. You can also mix and match any magical items and accessories at will, so say for example, you can choose a weapon that adds to your max life after each kill and an item that replenishes your health with each kill, so you are constantly increasing your own life. Since the enemies perpetually come out of the starting area and pursue you in the level, you can theoretically keep killing them until you are unstoppable. Provided that you are skilled enough to not be hit of course (I am not).

I once attempted to create a game where different item collection modified your attacks in dramatic ways, but I didn't get that far because the game wasn't fun. I learned that what seems on the surface like a shotgun approach to stacking features is actually a very calibrated method of balance, and I didn't have the patience at the time to refine it. I also learned that it was incredibly difficult to stack up the features in a way that they would interact with each other on a meaningful basis without having a vast collection of individual cases. I'd like to revisit this concept again because the amount of replayability and fun that other games with this mechanic have provided. I have a game in mind to apply this to, but it will take some prototyping to see if this does end up being as fun as I imagine. Judging from how much I enjoy the games and features cited in this article, I think it's well worth it to try again.