This large space station, setting to Arkane Studios’ recently released emergent sim Prey, deals with its residents’ effluent by sending it to large vats where it’s consumed by the things. When they’ve grown large enough, the eels are caught and butchered and their flesh is sent up to the station’s restaurant to be served back to the crew as sushi, setting up a self-sufficient cycle of energy.

“The way the station is laid out and the way you go inside and out of it, we really tried to think through the things it would actually need,” says lead designer Ricardo Bare. And this particular detail, well, it was inspired by Bare’s experiences with having a septic tank installed for his house, which opened up to him a world of drainage and seepage, and how it’s all founded on a careful balance of biological organisms to break down his own household’s waste.

“Of course, if you were a NASA expert you’d probably say that technically we didn’t have this and that in Talos-1, but we spent a lot of time on that level of detail,” Bare says. And the eels, as entertainingly gross as they are, are indeed emblematic of the thematic coherence of Prey’s world. This is a real place that makes sense. And it’s crewed by an equally coherent set of characters, most of whom are recently dead.

"You’re moving through the space station right after the wave of the alien terror, and it’s not even finished happening in some places."

To play Prey is to pick through their last moments, as well as their lives and relationships with your character, Morgan Yu. Throughout Talos-1 lies a tangled web of timelines that record the events of the alien attack that has laid it to waste. And overlaying them is the web of keycards, clues and items that lead you through its different divisions and areas, from HR to the power plant, the cargo bay to the crew’s quarters, as you seek escape, or the station’s destruction.

“There were several junctures along the development of the game where we had to stop and get the timelines sorted, like, big time,” says Bare. “It’s not the kind of game where you come into the area months after the terrible thing has happened. It’s happening as you’re escaping, moments ago. You’re moving through the space station right after the wave of the alien terror, and it’s not even finished happening in some places.”

Talos-1 was destroyed with the same imaginative rigor with which it was put together. The level designers would sit with Bare and other members of the team to talk about exactly what happened when the aliens attacked, explaining precisely how that body ended up lying over there, and why that person hid over there. “We had level designers put timelines down for many of our spaces like that. Five minutes in, this guy did this; ten minutes in, this guy sounded an alarm; 15 minutes in, the security guard tried to set the turrets up.” 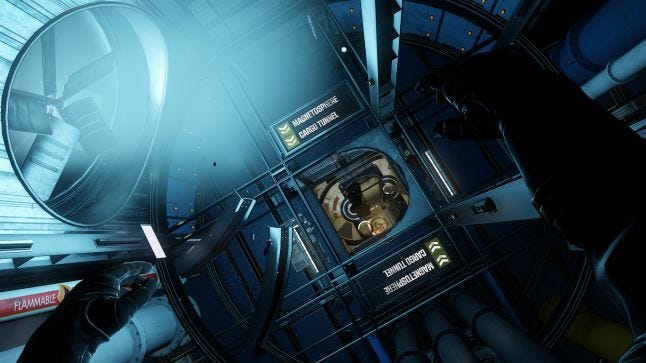 Consistency like this would be important for a game that can never know exactly when a player will come across things, and, indeed, whether they’ll ever notice or if they’ve made a choice that makes it irrelevant. For any conversation that a player can hear, Bare and his team had to work out what the player might have done before that point and how that might affect it, leading to many different permutations of situations in what seem like simple scenarios.

Take, for example, the three characters who can potentially be in Morgan’s office during the game. The robot January is there from the start, and later Mikhaila Ilyushin and Dr. Igwe can travel to it. Either could be first to arrive, and you may have decided, for whatever reason, to destroy January. So when they call you to give you an update, they might announce that there’s a wrecked robot there and ask what happened. Or there might be an operational robot and Dr. Igwe already arrived. Every permutation needs to be considered and written for. 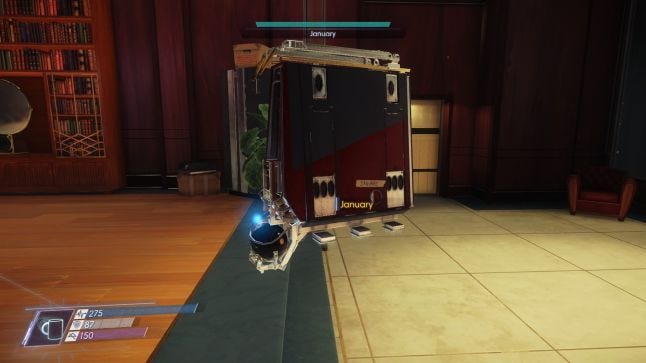 Though it was greatly inspired by System Shock, Prey is a lot more open, its quests defining pathways that criss-cross the station. The main storyline takes a methodical route that visits each area in turn, but various side quests make interesting additional connections between locations, injecting them with storylines and character relationships.

"We deliberately went for a strategy of allowing the player a lot of leeway and freedom in when they consume story bits."

To encourage these quest lines, each level designer was tasked with coming up with side quest that began in their level and ended in someone else’s. “One designer, Steve Powers, who’s been around since the Ultima days at Origin, came up with two characters from different departments who are stealing company secrets and selling them to competitors,” Bare says. “In order to do that, they’ve made a number of dead drops where one can make requests of things and the other hides them so they can be smuggled off the ship, and you can pick up on this and steal all the loot out of all the dead drops yourself.”

But Arkane never knows how a player will approach any given quest, when during their playthrough they’ll receive it, or when they start engaging with it. “You can have radically different experiences based on when you decide to go find the smugglers’ dead drop, and you can be anywhere on the space station when you take it on, and it might feel like you had to travel across the whole station, or you might be standing right on it,” says Bare. 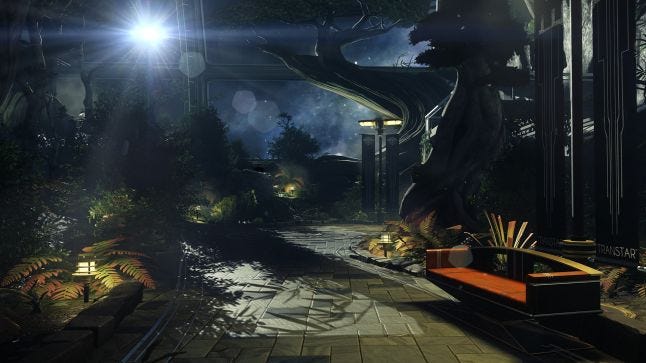 And even then, the quest will feel different depending on the player’s general attitude. A completionist might view it as yet another fetch quest to be overcome before they can tick it off their list, but another player might find it an opportunity to revisit areas, encounter new monsters and discover they can get into areas they didn’t realize before. Some players might feel overwhelmed by learning about new characters and others might disregard it and feel there’s barely any story in the game.

"You just have to start accounting for all those crazy out of order, sequence-breaking things the player might do and make it still work."

But as much as Bare says he has no idea whether he and his team did a good job of managing the pacing of it all, it was all part of the plan. “We deliberately went for a strategy of allowing the player a lot of leeway and freedom in when they consume story bits,” he says.

And Arkane went a long way with this strategy. Some major elements of Prey’s overarching theme and storyline are seeded across Talos-1 in such a way that many players might never come across them or fully understand their meaning. But the sense of discovering these secrets for yourself and realizing that Prey’s narrative timelines are even more tangled than you thought is one of the game’s biggest delights.

One of the most impactful is in the Who Is December? side quest, which explains Morgan Yu’s true background. By the time it begins, we know that Neuromod experiments have been performed on her (or him, depending on which Morgan you chose at the start of the game) in the hopes of learning more about how they give humans new abilities. And we know that removing a Neuromod will wipe a person’s memory back to when it was installed, and that in the past she made an AI called January that’s fitted with her memories and personality in order to help guide her in the future. 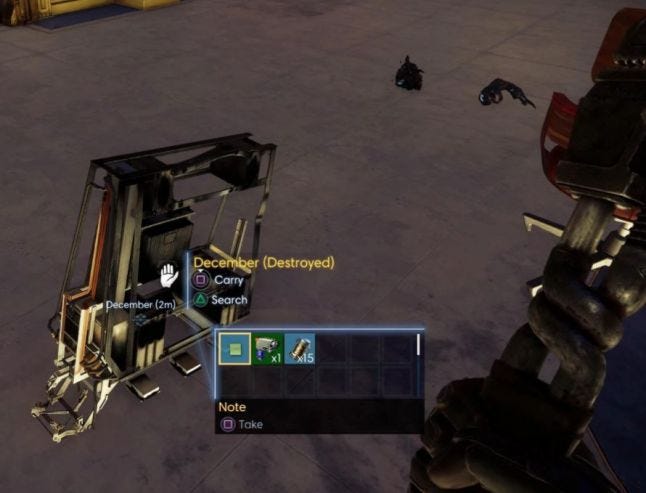 But then December appears. Here’s what we discover during the quest (beware, spoilers follow in this and the next paragraph): December is another AI, built by Morgan before she built January. While January is guiding you to destroy the space station in order to prevent any chance of the aliens invading Earth, December wants you to simply escape. And since they’re both imprints of Morgan’s own personality, they’re illustrations of the way it’s been drifting between Neuromod experiments, at one time towards selfish behavior and at another towards sacrifice.

The quest leads you to several locations where clues to this history are hidden. In Morgan’s living quarters, there’s a computer where she’s been noting her relationships with other crew members in an effort to remember them between experiments. There are unfinished robot chassis in her office and room that show that she’s potentially made several AIs. In her brother Alex’s room there’s a safe with a series of recordings of her, and in the station counselor’s room there’s another recording in which you hear an evaluation of Morgan’s fractured psychological state.

Initially, this revelation was going to be made through a single audio log. “But then, as we started to play the game, we realized we weren’t driving home this theme hard enough; it wasn’t present enough,” says Bare. “Raf [Colantonio, Arkane president] was like, ‘Hey we should take that December idea, not just an audio log and a broken robot. Let’s put December in the game. You think you understand it’s just January and Alex, and then December calls you and you’re like, what?!’” 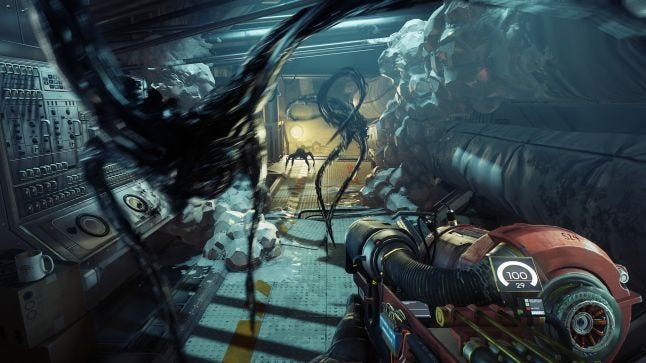 The details grew organically over the game’s development. Level designer Albert Meranda realized that Morgan’s office could be the location of the key to her quarters, and thought there could be a bag with supplies in to to suggest that she was preparing to escape. “You have to set aside the fact the player can do this at any moment, and instead just – at least the way I work – sort of flow-chart out the ideal path,” says Bare. “If I wasn’t distracted by anything and I had access to everything and I was following the clues, what are the five steps I would follow?”

Then from that skeleton they wrote the dialogue and set the objectives so they could follow it from start to end. “Now we go back to the beginning and throw in the permutations. What if January’s dead? What if I shoot December as soon as I meet it? What if I skip meeting December and instead discover the safe behind Alex’s Looking Glass first? And then you just have to start accounting for all those crazy out of order, sequence-breaking things the player might do and make it still work.”

Prey embraces the principles of the emergent sim, putting player choice above everything. But while that comes with the risk of players missing or forgetting key points, Prey’s world is built with the kind of consistency that allows you to trust in it, to relax, and know that if you want them, the answers are sure to be found in the details.