Ting Shang Jia and Jacky Yap are two of our Lead Game Designers supporting the global development for THE ALCHEMIST CODE and Brave Frontier, respectively. 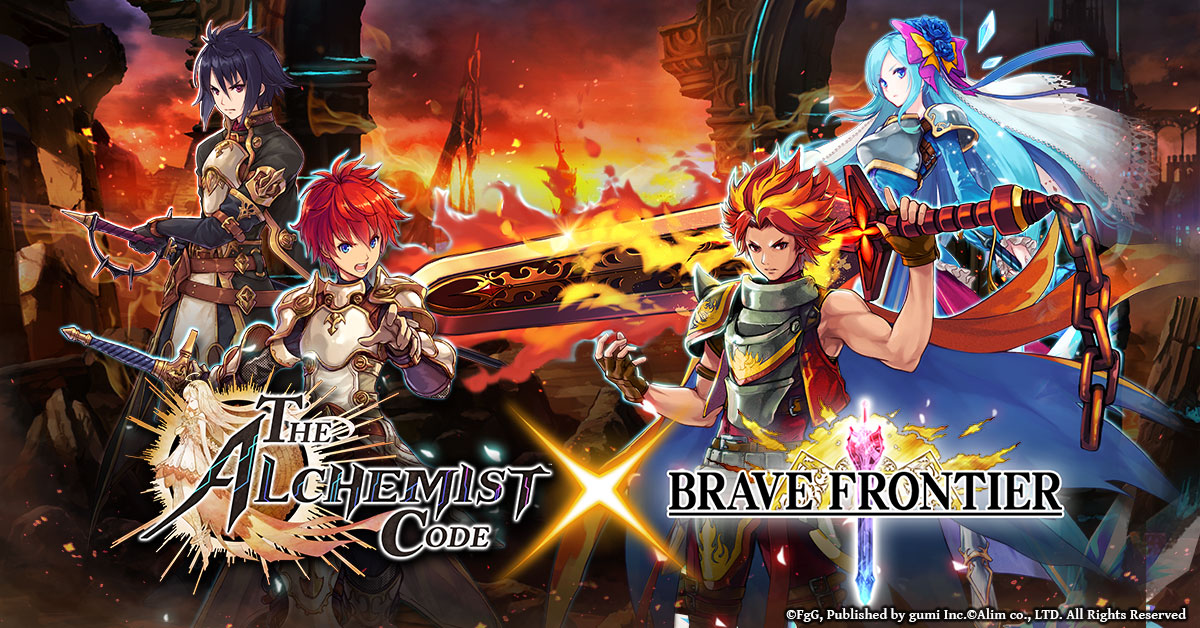 Welcome Guys. To start off, What are the best or most fun part of the THE ALCHEMIST CODE x Brave Frontier crossover?

J:  To me, the part that was most fun was finding out more about Logi’s character and motivations, and how we should express those characteristics through his in-game speech and animations. There was a certain point during development where we had to “tone down” Logi quite a bit, when we noticed he sounded too villainy for a hero.

It was really enjoyable to work with our Artist as well on the designs of Chloe and Lofia into their chibified Brave Frontier forms. Compared to THE ALCHEMIST CODE, the body proportions of Brave Frontier would be totally different, so we had to discuss which parts of the character design should stay and which should go, and how we should squeeze all of that design into a smaller body.

When a character from Brave Frontier levels up, their character design changes much more significantly as compared to a character from THE ALCHEMIST CODE. That is quite an interesting snippet of information, I think, which fans with a keen eye can try to spot and pick up.

On a professional and personal front, it is nice to work with fellow Game Designers like Shang Jia, who shares the same passion as me. It also helps that I am a fan of Strategy RPGs as well (laughs)!

Lofia’s Transformation from THE ALCHEMIST CODE to Brave Frontier

S: I was actually a Brave Frontier Game Designer before moving to join THE ALCHEMIST CODE’s team, so it was pretty nostalgic for me to see Vargas and Selena once again, though this time it’s from another side. So...if I have to choose, that would be it!

Another awesome thing about this collaboration is the chance to see Vargas’s and Selena’s abilities in 3D, when they already look so good in 2D!

J: Both Vargas and Selena are iconic to Brave Frontier as they are two of the fabled Six Heroes. Hence players who are are familiar or have played Brave Frontier before will have no trouble recognising these two heroes.

Vargas’s and Selena’s flashier skills were brought over to THE ALCHEMIST CODE in the best way possible as well, to showcase Brave Frontier’s high-action and fast-paced style.

S: Logi was chosen as he is the first protagonist and character you get to meet and play as in THE ALCHEMIST CODE. We wanted to introduce Logi to Brave Frontier players so when they play THE ALCHEMIST CODE, they will feel a deeper connection with Logi and feel more welcomed by this sense of familiarity.

Both Lofia and Chloe were chosen as they have personalities and character designs that are the total opposite of our main hero. This helps balance out the representation of THE ALCHEMIST CODE to Brave Frontier players.

Chloe’s Transformation from THE ALCHEMIST CODE to Brave Frontier

Each game has a unique Collaboration Event planned for this Special Collaboration. Can you share more how that came to be?

J: We bumped up the difficulty of THE ALCHEMIST CODE’s Vortex Dungeon in Brave Frontier to a whole new level. And I’m sure the players had a challenging and memorable gameplay experience. As you progress further, enemy units will become much tougher and smarter. For seasoned players, we do have something special — we made Logi, the final boss of this dungeon very much harder to defeat. In fact, Logi will be able to adapt to player’s inputs, making him a challenging and dynamic boss to overcome.

S: Vargas and Selena retained the strengths they are famously known for in the Six Heroes lore in Brave Frontier. Though they would be hard to defeat, we made sure it is not an impossible feat. Players would definitely need to be alert at all times when playing the Brave Frontier Event Quests. Our team also made a Hard Event Quest for players who are up for an even harder challenge. Players brave enough to take this challenge, knows they had to use everything that THE ALCHEMIST CODE has to offer — from elemental weaknesses, elevation, gear, equipment buffs, to back attacks - to defeat them.

Any final words for the fans?

J: Thank you for supporting Brave Frontier! Game on and keep playing! We hope fans are as excited as we are, in bringing this Special Crossover Collaboration into the palms of your hands!

S: If you are looking for a full blown SRPG game on mobile, THE ALCHEMIST CODE is for you — so do try out this new title! And to the fans: Thank you for your support! We have a plethora of events and collabs in store for you in the future! So just stay tuned and keep playing Alchemist!

Thanks for reading the Developer Diary for THE ALCHEMIST CODE x Brave Frontier Special Crossover Collaboration. We hope u enjoyed the crossover content as much as we did, in bringing this amazing event to us. Follow our Social Media Channels to get the latest updates, events and collaborations!

Both THE ALCHEMIST CODE and Brave Frontier are available for download for free globally, on iOS and Android devices.