In this article I'm making an analysis of co-op death mechanics in various roguelike games and show how I made some innovations to the existing formulas in the game I'm developing currently.
Milan Babuskov
Blogger
May 14, 2018

Single-player roguelikes have a somewhat easy task when it comes to player death. The genre itself dictates that once you die, it's game over. At least, if we adhere to the strict definition of roguelike. Some of the games allow for some progress to spill over into the next game, but all of them make you start over. Without this mechanics, the game isn't considered roguelike.

Now, what happens when two or more players are playing? Is it Game Over as soon as one of the players dies? Or do you allow reviving the players? What conditions need to be met for the player to revive? Answering these questions makes a huge difference in the way the game is played. When deciding what's the best approach, one should consider what is the way you want your game to be played. Do you want to limit the game to player pairs of similar skill level, or you allow newbies to play together with pros. This is an important decision, because roguelikes are often hard games to play. Let's look at some examples and see how different decisions influence the gameplay.

Enter the Gungeon has limited co-op mode - only two players and the second player can only play a single character. Once a player dies, he becomes a ghost with very limited gameplay options. The revive mechanic is rather interesting. There's an item that allows you to revive the other player once. This works pretty good until a player dies for the second time. After that, you can soon get into a position where only one player plays for a very long time as the only other way to revive dead players is to beat the boss or find and open a chest. This means that Gungeon is pretty hard core and expects both players to play well. If one of the players is a newb, he will die often and get bored waiting to be revived all the time.

The Binding of Isaac

BoI doesn't really have the full multiplayer game. Only the main player gets all the powerups and pickups and others can only play as babies with limited power. The main player shares their health with babies, so it's easy to revive them when they die. It's an interesting mechanics, which makes it more enjoyable as there's no waiting time. However, less skilled players can quickly ruin the game for more experienced ones who have to decide between spending most of the game playing with low health or telling their partners to go hide in a corner and/or wait to revive.

In Rampage Knights the dead player turns into a ghost who can move around and knock enemies into pits or interfere with their attacks. With some item upgrades, the ghost can also poison enemies or set them on fire. This is a pretty good mechanics because newbies can actually kill enemies pretty quickly even when dead.

The player stays in the ghost form until 10 enemies are killed. This is a decent solution to the death problem, but it does have its drawbacks. The main problem is that the players are revived to full health, so the players can simply take turns dying and go through the whole game with 30+ deaths. Another problem is that completing a level gets the dead player revived as well. So if someone is low on health after the boss fight, he can simply jump into a pit and get full health at the start of the next level. All this makes co-op in Rampage Knights much easier than the single player mode.

Spelunky also has the dead ghost mechanics. Dead players can knock down some enemies into pits or spikes, activate traps, etc. To revive them, the players have to find and hit a coffin. This is a good solution, however sometimes the dead players can get bored while waiting. Although they can do stuff, it isn't much compared to playing the game while alive. The only big problem with this approach is that the coffin only revives one player, and there's only one coffin per level. So, if you play 3-player or 4-player game it means that some of the players would have to wait for two or three levels before they even have a chance to be revived. This pretty much ruins any fun for players who want to complete the game and not just goof around. 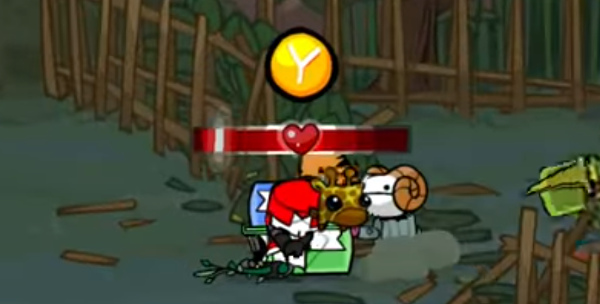 Castle Crashers isn't really a roguelike, but I included it because of an interesting revive mechanics that was also reused in the recent Lost Castle roguelike. When a player dies, others have to come to them and revive them. This means they have to stay still and not fight the enemies for a while. While this mechanics works pretty good in Castle Crashers, in Lost Castle the enemies are much more aggressive, and it's almost impossible to revive dead players until the room is clear of enemies. Since the game has some enemies with high health this can take a while and the dead players can quickly get bored. Combining an experienced player to play with a beginner is not an enjoyable experience for any of them as the newb will keep dying and the pro will spent a lot of their time trying to revive the dead ally instead of fighting the monsters.

Son of a Witch

When designing death in Son of a Witch, I took a look at many games and weighted carefully what would be a good approach. The death mechanics had to satisfy the following goals:

The goals were simple, but achieving them took a bunch of iterations. When I presented the game during EGX, I made changes to the way the death works every day and then watched how it affected hundreds of players who played the demo. It only started to work well when I mixed up a couple of different mechanics:

1. The main way to revive players is to kill enemies

When a player dies, he remains dead until all the enemies in the room are gone.

2. Allow reviving during the battle, but at a cost 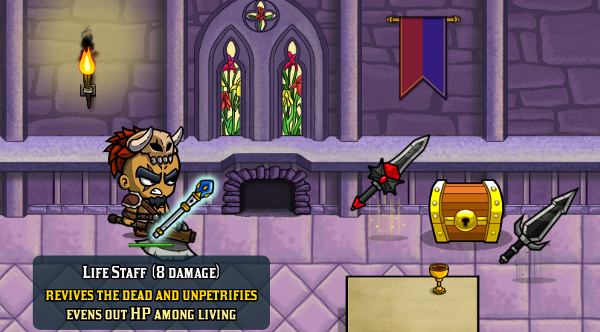 You can revive all dead players with a Life Staff which can be used once every 5 rooms. With mana potions you can do it more often, even multiple times per battle. This means that the players can stack up on mana potions for tough boss battles.

The Life Staff is pretty common drop, but it's isn't guaranteed to show up in every game and you don't know when or where would you find it. This encourages the players to explore and unlock every gold treasure chest they find.

Additionally, undead heroes can also be revived with the Staff of the Dead which animates the undead

3. Players should be encouraged to cooperate

Once a player is dead, a 20 second countdown starts, and others have to revive him or clear the room of enemies. If the players have no Life or Death Staff, they have to fight quickly to save the game. The bosses have more HP, so the timer is set to 60 for the boss battles.

The possibility of the countdown timer makes the players care about each other more. Experienced players will seek to help newbies during the fights to prevent them from getting overwhelmed and killed.

The timer also removes the boring parts. If a player dies he knows that in 20 seconds he will either be revived or a new game will start. In any case, he won't have to sit and watch while his friends are having fun.

Beside the Life Staff, there are a couple of items that can be used to instantly end the battle and revive the dead: 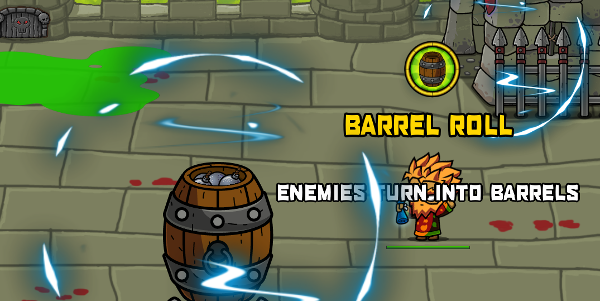 Barrelize scroll quickly turns all the enemies into barrels and thus ends the battle. It's risky to do with bosses because they turn into big exploding barrels.

You can use the Peace scroll that makes all the enemies peaceful. It doesn't work for bosses, so it's useful outside the boss fights.

You can teleport away from the room with enemies to another room. This resets the timer to 20 seconds or stops it completely if you teleport into an empty room. There are two ways to teleport: The Random Teleport scroll and the Silver Coin which teleport you into a random shop on that level. The teleport scroll can be dangerous as you might show up in a boss room. The best time to use it is during the boss fight after you have cleared all the other rooms in the level and you know it will teleport you into an empty room.

5. Have an easy-mode character for newbies

Sometimes it's best to prevent players from dying all all by allowing them to heal more often. In Son of a Witch, there's a playable healer character who can create food to heal the whole party. It's a great choice for new players and having some extra healing options can also help an experienced player when they are playing together.