How new mechanics are created and what they are based on, with a focus on the creation of the SkyBoats wind mechanic.
Brett Lowey
Blogger
August 01, 2016

As a game designer it is a dream of mine to create a truly new or novel mechanic. This goal is incredibly difficult for a couple of reasons. Firstly, so many things have been done before, I often find myself coming up with what seems like a new idea only to realize someone already made a game using that mechanic (or something very similar). Secondly, it is difficult to think of something new when you have so many old mechanics in your head. It is difficult to think of new things, and not to just base your thoughts around the framework that already exists.

I have no doubt that old mechanics can be used in new and interesting ways, and there is nothing wrong with doing so. Many or even most games I have loved in the past decade have been based on other things, and have either innovated or improved on the mechanics used before. There is however something very exciting about the idea of creating a truly novel mechanic. 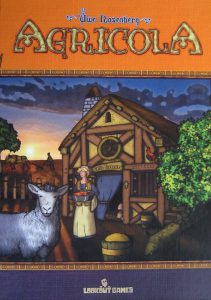 Many mechanics are based on real life systems. For example in Agricola players use various different actions to create their own little farm and family. The player with the best farm at the end of the game wins. Growing a farm and starting a family has many different parts which all work together. Agricola simplifies some of these, and sets them all up in such a way that you have to make many choices and prioritize your options. Finally, it uses the worker placement mechanic to allow for players to compete with one another. Real world systems are commonly used in board games to create mechanics. The representation of a system that works in a certain way is often strategically interesting.

When we started working on SkyBoats the conversation about a novel mechanic was again brought up and we went to work. What we eventually came up with is a wind-sailing mechanic which we are both really happy with. I don't know if it is a unique mechanics that has never been seen before. I don't think I've ever played a game using this mechanic. Either way, at the end of the day it is really fun and creates cool strategic choices, so I am happy with the outcome. The SkyBoats wind mechanic allows players to sail along winds based on the amount of glide each boat has. Winds are played by the players based on a number of different shapes that correspond to different goods. As your boat sales along the winds it gains “prowess” which makes the goods it sells worth more points or “glory”. This rewards players for making long journeys across the world to sell goods. We felt when we were first playing that long journeys were cool and fun, so we wanted to encourage that sort of gameplay. The winds played by the players also stay on the board for a couple rounds, so you can use previously played winds to sail your other boats along as well. You can even set up routes from city to city to create a sort of trade route.

The wind mechanic is one of the core mechanics of SkyBoats and we're super excited for everyone to try it out!

As always I would love to hear any comments, questions or critiques!

SkyBoats is currently in the middle of a kickstarter campaign and we are just $32 away from funding! We would love it if you checked it out! https://www.kickstarter.com/projects/1279797925/skyboats-sail-the-skies/description