Conveying backstory via character and dungeon design in Sundered

“For Sundered, we built a world with a very complex backstory,” says Thunder Lotus Games creative director Will Dubé, “and then tried to communicate it throughout the game: through the monster and dungeon design.”
Phill Cameron
Blogger
November 10, 2017

Sometimes just a glimpse of a game can immediately reveal who developed it.

The art design, the aesthetics, the style, are so distinctive and unique you can instantly recognize a studio’s fingerprints, and even get some sense of what to expect from the game you’re looking at in terms of polish and design.

It’s the kind of instant recognition that Thunder Lotus Games trades in with its game, Sundered, which shares a direct artistic lineage with its predecessor Jotun. As president and creative director Will Dubé is quick to point out, this distinctive style is something his studio is happy to court.

“We're always told not to judge a book by its cover, but, for better or for worse, people do,” Dubé says. “Our art has definitely helped us stand out from the crowd. It is a major reason for our studio's success.” But he’s quick to acknowledge that visuals aren’t the only factor in a game’s success. “Moving forward, we want to make sure that we make games that are not only incredibly beautiful but also incredibly fun.”

For Dube, the art design should be a central pillar of the initial design of a game, one of the core principles that steer it through development. 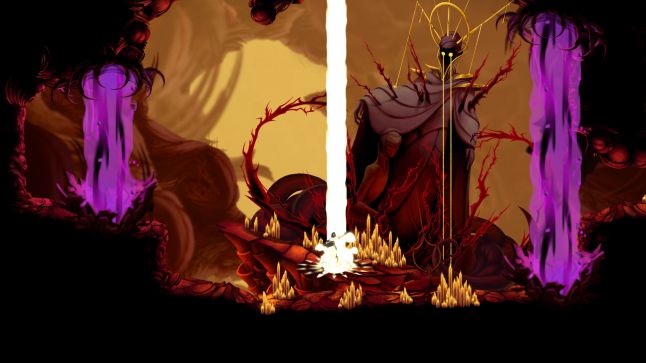 "For Sundered, we built a world with a very complex backstory, and then tried to communicate it throughout the game: through the monster and dungeon design."

“If all goes well, the direction should be set at the start of the project and should remain the same all through production. There's an amazing article on Gamasutra about what makes successful game projects, and one of the biggest factors is the strength of the creative vision. I think that the art style must fit within that creative vision, and remain unchanged.”

For Thunder Lotus, there’s no fixed process for how the artwork that is so integral to their identity interacts with the gameplay design and vice versa.

“It depends on the creative process. For Jotun, we wanted to bring Norse mythology to life. That meant choosing a specific myth, deciding how we wanted to translate it into level design, and then make sure that it was visually present.”

"A great art-style is key to bringing players in, but then the gameplay needs to support the experience."

But what worked for the world of Jotun, a design that started with narrative translated into gameplay had to be tweaked slightly for the studio’s second project.

“For Sundered, we built a world with a very complex backstory,” Dubé says, “and then tried to communicate it throughout the game: through the monster and dungeon design.” The art helped to directly define the gameplay, from the construction and dimensions of the setting to the look and characteristics of the enemies. And it played a major role in shaping the workflow at the studio. “Given the nature of producing a lot of hand-drawn assets, it obviously impacts our production pipeline, which we're constantly improving and optimizing.”

Despite the heavy visual focus, at the heart of the process, Dubé wanted to instill the core philosophy that gameplay was king and should always take precedence.


“At the end of the day, for us, a game needs to be fun. I think a great art-style is key to bringing players in, but then the gameplay needs to support the experience, or players will have paid for a game that is all style, but no substance.”