More on making games with cheap difficulty.
Cathy Pyle
Blogger
April 20, 2010
A while back I posted an entry about “Cheap Difficulty” describing situations in which game developers create unfair situations just to make a game harder.  Recently, after playing a few more games, I realized there is another cheap difficulty trick that is used a lot that really ticks me off; timed levels. 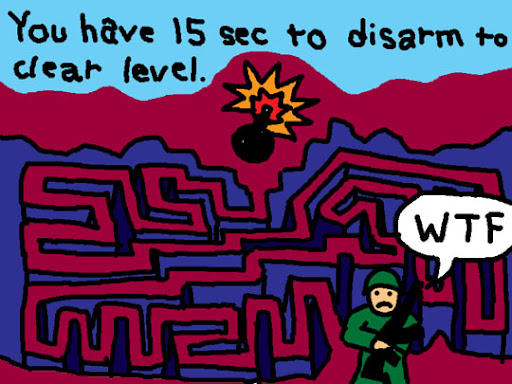 First let me say that I like to play video games as a stress reliever and because they are fun.  Like a lot of other people my job depends on timing and schedules.  Getting stuff done by a certain date or in a given period of time.  So the last thing I want to see when I sit down to play a game is the same constraints that I deal with on a regular basis.  To me, having me do something in a game in a set period of time just adds stress.  I also think it is a super cheap way to make something difficult.  It makes me wonder if some of the developers sit around and have this conversation:

Jack says, “Hey Bob, I played the final level and got through it after like three tries”.

Bob replies.”Hmmm, that seems too easy, I know, we could have the building have a bomb that is set on a timer, and if the player doesn’t get to it in time they die!  Oh, oh, and make it to where if they are really f-ing good they will only have like 2 seconds on the clock! Yeah that will make it harder huh?”

The bomb idea, auto destruction sequences seem to be the most common cheap way to make something stupid difficult.  Anyhow, I don’t mind timed games if there is a reasonable buffer, but most of the time they make it where I have to play the level 100X times and get so damn good just to get through it.  To me it just stresses me out and makes me pissed off.  So please stop using unreasonable timers to make a level difficult.  Thanks, I will try to do the same :)