Blizzard hypes a new Hearthstone expansion with a Facebook chatbot

In a fun little twist, Blizzard is letting some Hearthstone card art slip out by way of a Facebook chatbot that brings players into a small dialogue sequence.
Bryant Francis
Senior Editor
October 25, 2016

The tech world has been a little bit excited lately about the potential of chatbots—especially Facebook chatbots—to help manage customer service interactions online. Meanwhile game developers like the folks at Ocelot Society have become interested in chatbots for interactive storytelling purposes. What happens when the two collide?

As it turns out, it’s Blizzard who has the answer. If you scroll on over to the Hearthstone Facebook page right now, and click the “message” button, you can start chatting with a goblin innkeeper named Talan, who’s a little eager to reverse the typical bartender/patron relationship and starts spilling some secrets.

It’s an interesting mechanic, one Activision has apparently employed before with the Call of Duty Facebook page, and while it’s just a piece of marketing here, it’s worth poking around to see what Blizzard’s coded in to this chatbot’s interactions.

It seems mostly primed to share a sneak preview of some card art for the upcoming Gadgetzan update, but if you push the bot further, it’ll even provide some typical text-adventure dialogue choices that aren't typical for the Messenger platform. 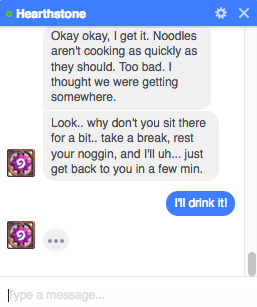 So are Facebook chatbots the future of the games business? Probably not, but who knows, maybe it’s a mechanic worth working into your next game idea somehow.