Justifying proof that arcade cabinets are designed to eat your quarters, to the point where the number of quarters inserted is irrelevant - unless of course you enjoy inevitable defeat. Also: video of pink flamingos!
Michael Molinari
Blogger
April 09, 2009 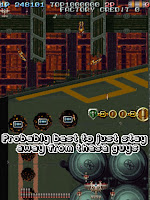 I don't know about you, but when I play shmups, I hold the fire button down until I either get a Game Over or beat the game. I capitalized "Game Over" because it is most definitely a proper noun.

It's the last thing you see upon every play, and all-too likely, the most visible memory you have when thinking back to certain experiences (I shake my fist at thee, Andross). In the case of Ikaruga, the way the game is frozen while you enter your initials (or "AAA" in a fit of rage from missing that 4 mil mark on Chapter 1) and then reanimates back into motion with a mechanical buzzing sound of defeat is all it takes to make me want to come back and prove the game wrong.

At least in Ikaruga, I know it's possible to come back and do better and get a little farther. At least the game is beatable when I do my best. I wish I could say the same for Battle Garegga.

Developed by Raizing, the game is one of those pivotal entries in the genre that helped define all of that manic craziness that we know and love. It apparently was a heavy inspiration for DoDonPachi's golden joyride, so why not love it, too? Probably because it hates you. I speak of course of the rank system in the game, an invisible collection of algorithms designed to slowly deteriorate you from the inside-out.

Sure, rank systems are in all kinds of games, not just shmups. GTA IV has a dynamic system that changes the difficulty of missions based on how many tries it takes you to complete them. Left 4 Dead heavily uses a ranking system that fluctuates difficulty in real-time based on how well your party knows how to avoid being vomited on.

So why point out Battle Garegga's rank? Because if you just hold down the fire button, dodge every bullet, and collect every power-up, the game will become literally impossible to beat. It simply cannot be done. And it's all thanks to the omni-present rank which oversees your every move.

Unfortunately, the dedicated community over at the shmups.com forums have collected a compendium of knowledge around this one aspect of the game. Unfortunate, in how I now know just what goes into deciding the rank (quick summary: everything).

Let's start with collectibles. If you touch a power-up, rank goes up. That goes for weapons upgrades, options (helper pods at your side), bombs, medals, and auto-fire upgrades (big no-no on touching those). If you shoot a bullet, rank goes up. If you use special bullets, rank goes up. Using a bomb, gaining a life, beating a boss, simply existing; it doesn't matter. Rank goes up (Yes, simply existing without dying makes rank go up). The list goes on.

Rank is even so evil that it will sneak its way into your next play session, requiring a reset of the ROM or PCB or whatever you may be using to play it in order to get it back to default. The only true way, in fact, that lowers your rank is to die (what a wonderful lesson this game teaches us about life and its hardships). The less lives you have when you die, the further the rank is reduced (excluding having 1 life left, at which point dying will inevitably give the game another chunk of your soul). 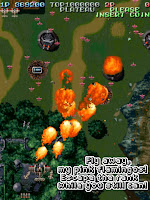 This may be bleak news, to find that anything you do in the game in order to survive and get ahead only pushes you further back. If I recall correctly, the final boss to Final Fantasy VII had a similar fate if you maxed out your characters' stats, rendering the battle impossible to win (making it even more ironic that the very final battle with Sephiroth is impossible to lose).

I suppose on the bright side with Garegga, you don't have to invest dozens of hours into one game with no backup saves only to find that you can't beat it; that realization takes only a few minutes. The best way to play (i.e. complete) the game is to take your time collecting power-ups, avoiding certain power-ups altogether, only shooting when necessary, etc.

Players going for score use this same recipe, though they incessantly dangle their fragile progress in front of the rank system, pushing it as far as it can go without causing an implosion of the game and its local universe.

Fortunately, as with almost all games in existence, there are a few tricks to getting an upper hand. There's a few sneaky ways to exploit massive point gain with some later bosses. My personal favorite is by hassling a flock of pink flamingos that found refuge in a castle, shrouded by a small forest, in the first half of level 2.

Your fire disrupts their peace, forcing them to migrate north, at which point spraying them with more bullets / fire can cause your score to become an overnight millionaire. None of them seem to be harmed, so it's okay that I mention finding extreme joy in sending a flamethrowing special move into their haven.

I originally thought this game would be an ideal place to go for a good ole 1CC. Further reading made me not back off, but rather take my time with pacing if I ever wanted a shot at seeing some sort of credits roll. That rank system is just about as in-your-face as Sinistar's ego-centric taunts. At least Sinistar eventually shows his ugly grin.

Because showing a skillful run of this game is a slow and flavor-filled art, even under my respectful gaze, I'll just show you those awesome flamingos instead. They may be hard to see, but they're all flapping away from 0:28 to 0:38.
[YouTube link here]

And finally, I wish the best of luck to Zakk from Hey Poor Player! in his endeavors to get a 1CC in Battle Garegga.