Armello is a digital board game from Melbourne-based studio League of Geeks. It wears tabletop influence on its sleeve but breaks with modern tabletop convention in a few ways that suggest a lack of confidence in itself as a serious strategy game.
Torbjorn van Heeswijck
Blogger
September 10, 2015

There are many things to like about League of Geeks' Armello beyond the impressive attention to aesthetics. The slow death of the king is a clever way to make the set number of game rounds feel thematically natural, while the contrast between the players’ growth and the king’s decline gives the game a nice arc. The terrain rules are equally elegant – particularly the damaging swamps which are beneficial more often than one might expect. The cards and their associated resources are well balanced, the day/night cycle surprisingly meaningful and the prestige leader having some say in the king’s announcements is a clever touch. The quest system works very well, allowing players to make an informed decision but rarely offering one that feels obvious. There are less successful areas - spirit stone victories feel disconnected from the rest of the system, the rot mechanic and associated victory condition could do with some development, and the game is at times unsatisfyingly random – but overall the game’s rules feel appropriately like a modern board game. 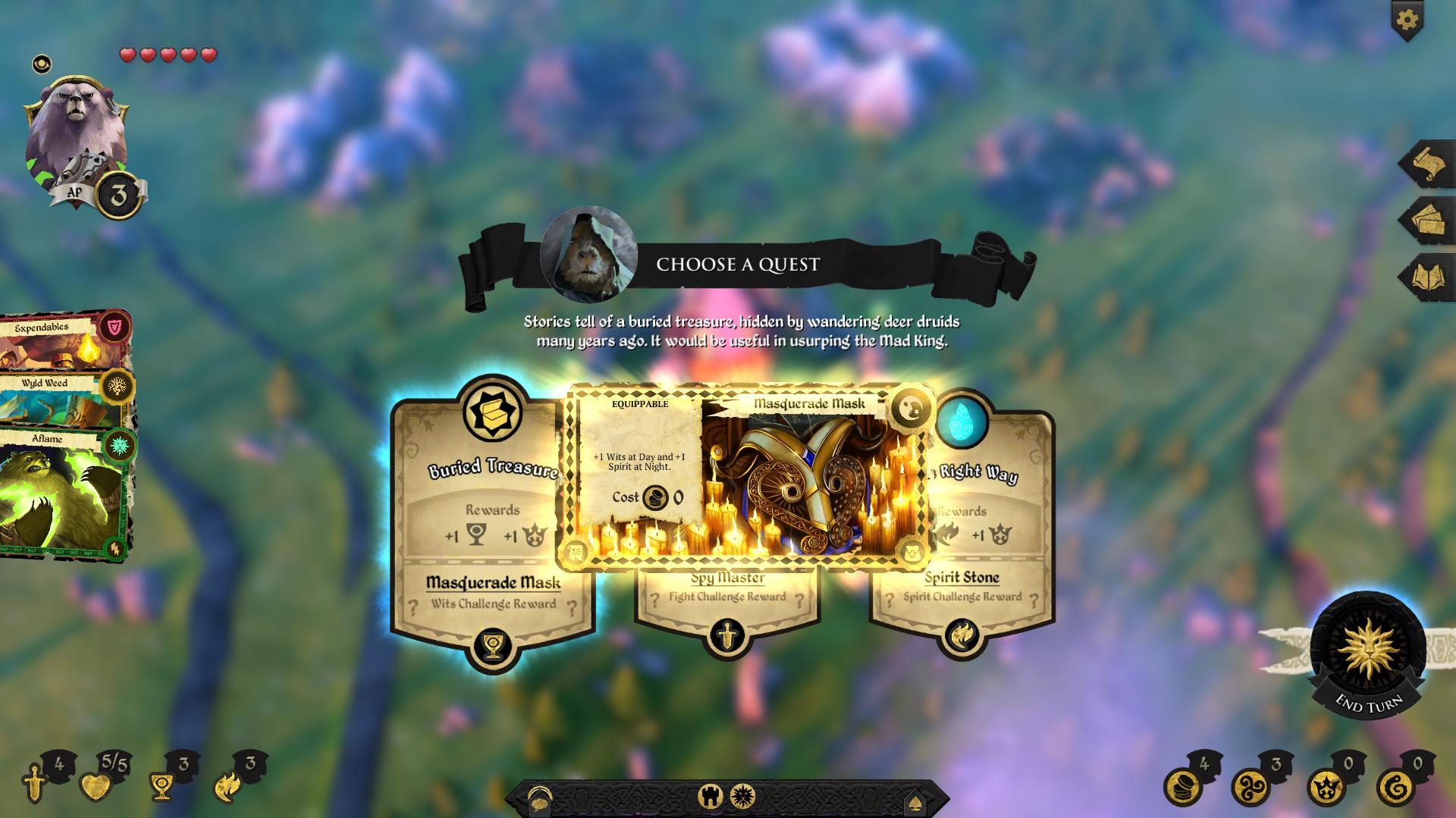 Where Armello disappoints the most is in the way it presents this content to the player. Because they don’t have a computer enforcing rules or access to content, traditional board games are transparent. The rules are given to players upfront, the board and components communicate the game state clearly to players, and components are not hidden or locked away. Inherent in classical board game design is confidence that allowing players to know everything about a game from the start will not diminish their interest in it, that the results of the game system is the thing to be explored rather than the components. In contrast, Armello hides much of its content from players from the very start. A list of the games’ cards is offered by the main menu but players must encounter each card in-game before it is added. Players may choose two items before the game to enhance their hero’s abilities but the majority are locked behind achievements. The in-game manual is reasonable but not comprehensive and it cannot be accessed from the main menu. 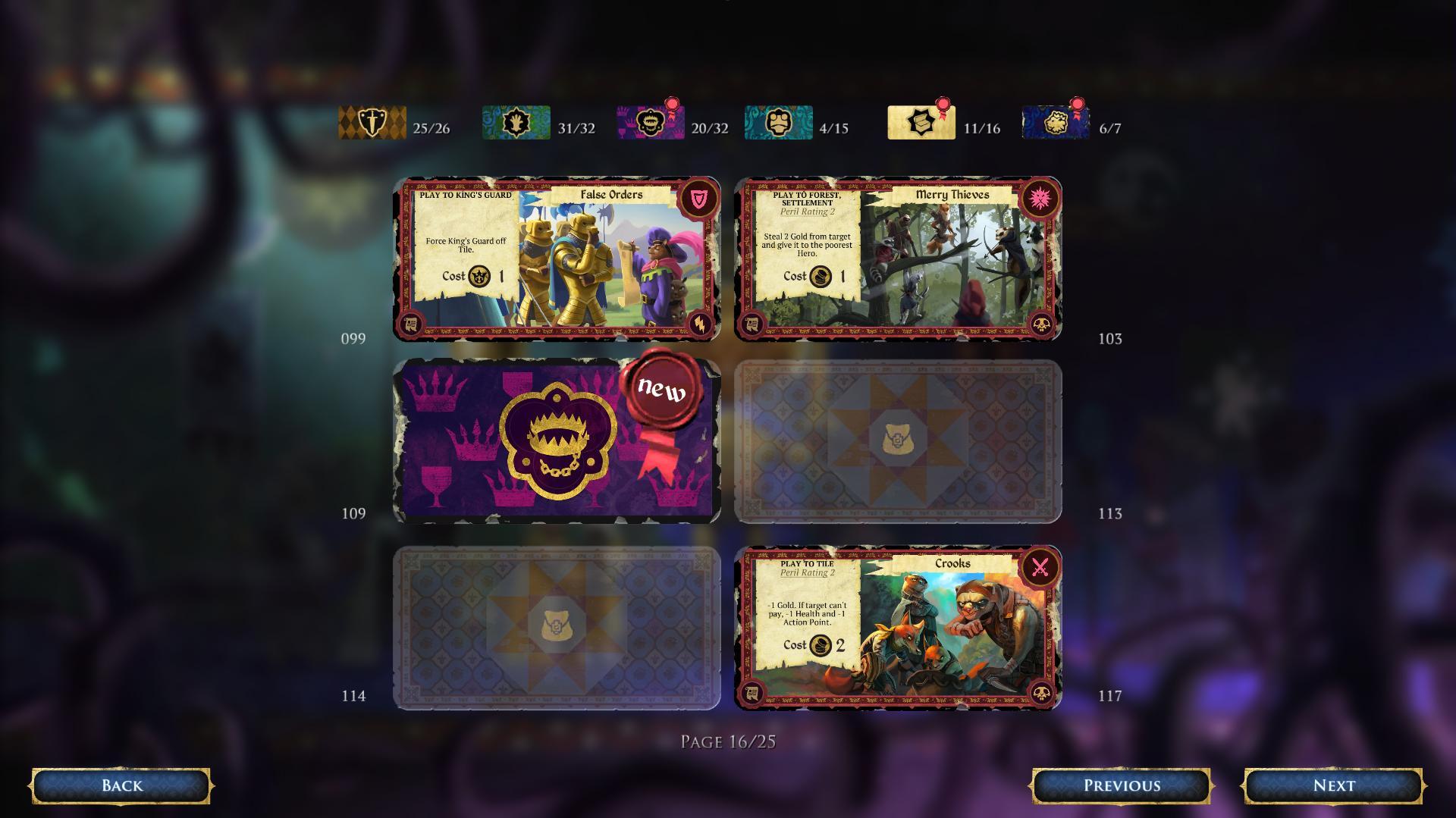 Want to know how many damage-causing cards the game contains? Play a lot

These aren’t atypical digital design choices, but digital strategy games in particular could benefit from recognising that the restrictions of self-contained physical game design are not entirely negative. Locking content away from players implies a pair of fundamental issues with the game: That it is too complicated to introduce in its entirety upfront, and that the game is not interesting enough to hook players without the virtual carrot of unlocks and content exploration. This may be somewhat justifiable in a highly complex narrative experience, as part of an extended campaign, or in a deliberately shallow game running on a freemium model, but neither implication is healthy for something presenting itself as a self-contained strategy game.

Obstinacy with respect to information extends to gameplay as well. Almost all in-game information is trackable but very little of it is available at a glance – if you want to know how much gold your opponents have you need to browse through individual information tabs, and while the game shows you what colour cards people are drawing it won’t give you the same information just seconds later. Most egregiously, the game’s map is visible at all times but zooming out to see more of it at once leaves a layer of clouds obscuring the player’s view. None of these measures will stop a serious strategy player from accessing relevant information; it only makes the process slow and frustrating. Despite having an option for ranked multiplayer in the menu Armello suggests in many ways that it is not a game to be played competitively. 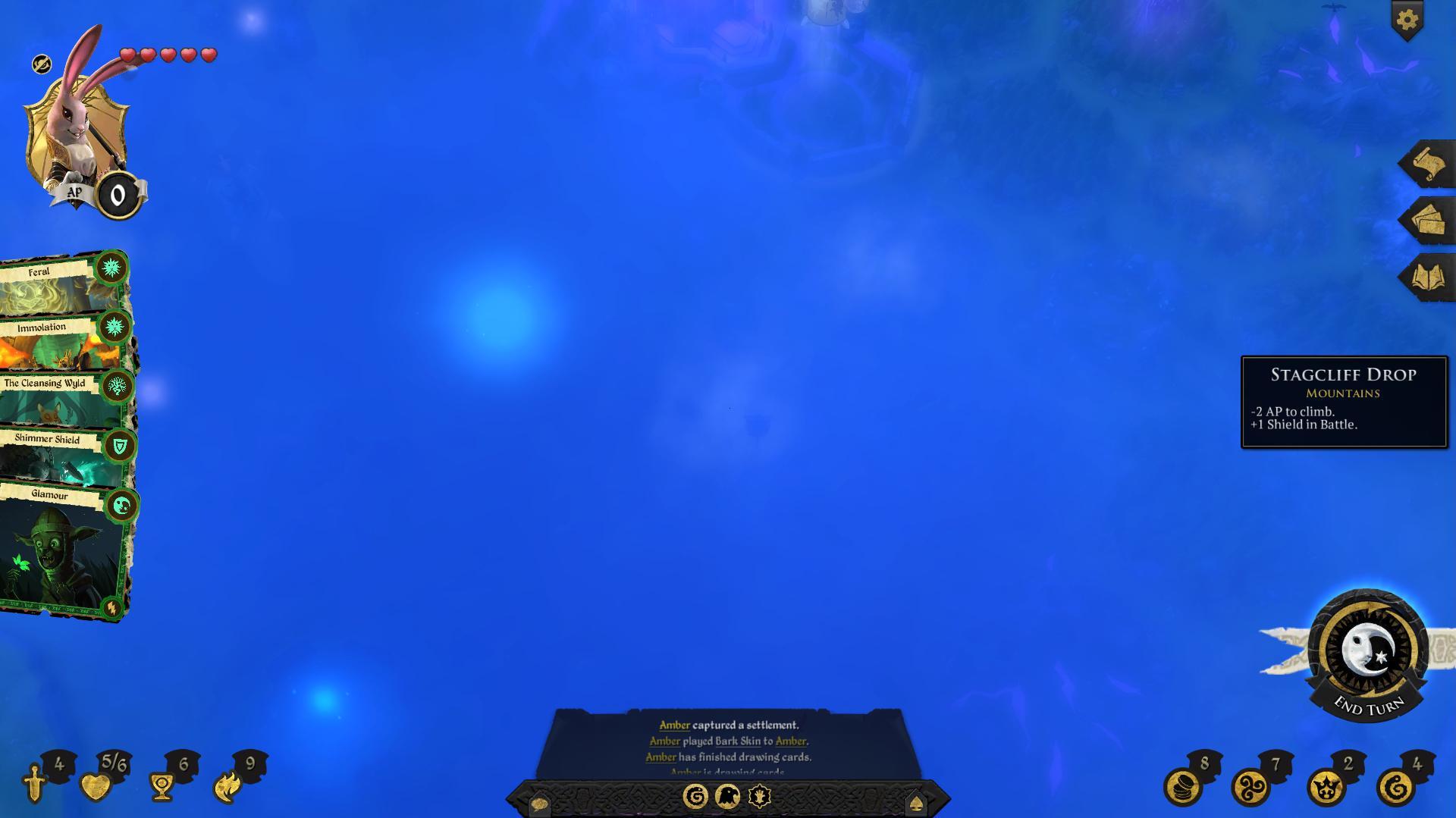 I hope that League of Geeks takes a serious look at some of these issues in the future, as the game has only just released from early access. Locking away basic gameplay content from paying customers until they have played dozens of hours is unkind. Forcing players of your ranked mode to go outside the game for essential card and rules information or to deal with deliberately obtuse in-game presentation of information is unkind. Not just unkind to players but to the game itself – Armello is clearly a labour of love that has had immense effort put in to it. It, and digital board games as a whole, need designers confident that their game can earn players’ love and time on their own merit.